III-06c: Median Annual Earnings of Full-Time Workers with a Terminal Bachelor’s Degree in the Humanities, by Gender for Selected Disciplines, 2015* 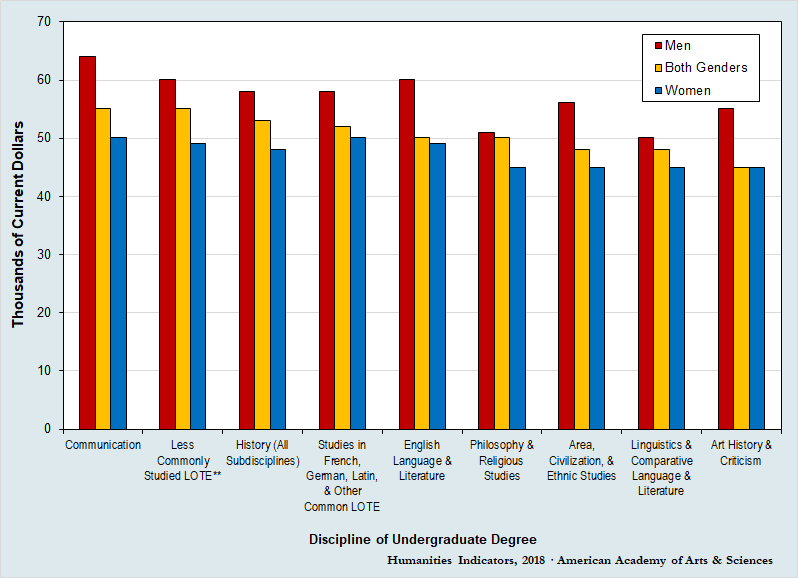 Data Source and Other Information

* Those who worked 35 or more hours per week for 50 or more weeks in the previous 12 months. Fields are arranged in descending order of earnings for both genders.
** Languages other than English.
Source: U.S. Census Bureau, 2015 American Community Survey Public-Use Microdata Sample. Data analyzed and presented by the American Academy of Arts Sciences’ Humanities Indicators (www.humanitiesindicators.org).

For the purposes of the American Community Survey (ACS), the source of these data, the U.S. Census Bureau defines earnings as “the sum of wage or salary income and net income from self-employment. ‘Earnings’ represent the amount of income received regularly for people 16 years old and over before deductions for personal income taxes, Social Security, bond purchases, union dues, Medicare deductions, etc. An individual with earnings is one who has either wage/salary income or self-employment income, or both. Respondents who ‘break even’ in self-employment income and therefore have zero self-employment earnings also are considered ‘individuals with earnings’” (from ACS documentation provided at http://www2.census.gov/programs-surveys/acs/tech_docs/subject_definitions/2014_ACSSubjectDefinitions.pdf, p. 81). This indicator uses ACS data to estimate the earnings of full-time workers who have a terminal bachelor’s degree in the humanities. (A full-time worker is defined as an individual who has worked at least 35 hours per week for 50 or more weeks, including paid vacation, in the preceding 12 months.) This indicator focuses on the median earnings of humanities majors. For data regarding the range of typical earnings of humanities majors, see the supporting table for this indicator. This table provides estimates of the 25th and 75th percentile earnings for humanities majors and majors in other major academic fields. The 25th and 75th percentiles are known as the lower and upper quartiles. Quartiles are statistics that divide the observations of a numeric sample into four groups, each of which contains 25% of the data. The lower, middle, and upper quartiles are computed by ordering the values for a particular variable from smallest to largest and then finding the values below which fall 25%, 50%, and 75% of the data. The lower quartile and the upper quartile are the two values that define the interquartile range (the middle quartile is also known as the median). The interquartile range, which excludes the most extreme values of a data distribution, is used to describe the range of “typical” or “usual” values exhibited by a set of persons or objects. For the purposes of this analysis, all workers with a terminal bachelor’s degree in the specified fields were included, irrespective of their age. The ACS permits respondents to specify up to two fields of bachelor’s degree. For the purposes of this analysis, an individual was counted as having a bachelor’s degree in the humanities if the field of either reported degree was within the scope of the humanities as specified by the HI. The 2015 ACS questionnaire asks respondents to describe the discipline of their undergraduate degree in their own words. Degrees are then classified by the Census Bureau into disciplinary subcategories. These subcategories are then combined by the bureau to create the more general disciplinary categories used in this analysis. “History (Excluding U.S. History)” degrees (referred to simply as “History” degrees by the Census Bureau) include those degrees identified by the bureau as being in:

Back to Humanities Indicators