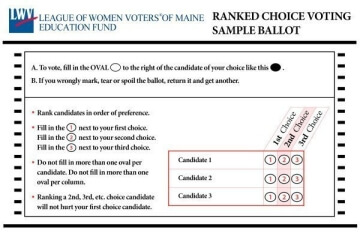 In the United States, too many election outcomes do not represent the preferences of a majority of voters.

This is because most state and congressional elections are determined on a winner-take-all basis: the candidate who receives the most votes wins, even if they did not win a majority of votes. In presidential elections, most states allocate all of their Electoral College votes to the state’s popular vote winner.

The winner-take-all model presents serious shortcomings. When votes are distributed among three or more candidates, the winner of the election may be a candidate who is disliked by most voters. In those cases, a vocal minority is able to impose its will over a more moderate majority, candidates are incentivized to appeal to political fringes and third-party candidates face pressure not to run lest they split the vote.

There is an alternative: ranked-choice voting.

The reallocation of votes is tantamount to a run-off election, without the need for voters to show up at the polls a second time. Because second and third choices matter in the ranked-choice model, candidates have an incentive to speak to a broader group of voters.

The result: more moderate candidates and campaigns, a more welcoming environment for third-party candidates, and greater confidence among voters that their votes are not being wasted or distorting the outcome.

Read more + Read less —
“We’ve seen what happens when there are three candidates running and the way that a strong, usually very polemical minority, wins. And I don’t think it’s in the best interest of building community and trying to work together to have people who are elected, elected by a minority of the voters. And so what I like about ranked-choice voting is that by the end of the day coalitions have been formed in order to give somebody more than 50% and to me that’s more of an endorsement of whoever that leader is who becomes elected.”
—Bangor, ME
Previous Next

Ranked-choice voting has already been effectively instituted at the state and local levels.

FairVote and Campaign Legal Center and RepresentWomen and Unite America are committed to working to implement this recommendation in order to help reinvent American democracy for the 21st century.

In order to implement Recommendation 1.2 by 2026, the Commission proposes the following milestones to complete by year-end of: