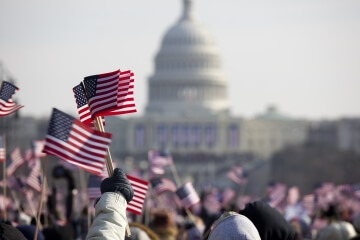 Amend or repeal and replace the 1967 law that mandates single-member districts for the House, so that states have the option to use multi-member districts on the condition that they adopt a non-winner-take-all election model.

In this scenario, two or more House districts would be combined into a new larger district, which would send multiple representatives to Washington. Instead of drowning out minority votes, multi-member districts would amplify the benefits of ranked-choice voting and signal a victory for equal voice and representation.

Congress mandated the use of single-member House districts in 1967. The law made sense at the time, as there was concern that efforts might be made in the South to draw large multi-member districts that took representation away from black voters. Many of the concerns that motivated the 1967 law are still valid today. Within the framework of winner-take-all voting, state legislatures could draw large gerrymandered districts that dilute the votes of non-white voters and voters in the political minority. States should only be permitted to draw multi-member districts if they adopt ranked-choice voting for those districts.

Today, ten states have at least one state legislative chamber with multi-member districts.

Election Reformers Network, FairVote, The New America Political Reform Group, RepresentWomen, and Unite America are committed to working to implement this recommendation in order to help reinvent American democracy for the 21st century.

Election Reformers Network is nonpartisan 501c(3) founded by election specialists with backgrounds in international democracy support, election monitoring, and U.S. reform campaigns. ERN develops and advocates for tailored institutional reforms, particularly in areas of U.S. democracy that can benefit from a comparative international perspective. ERN has backed winning ballot initiatives for ranked choice voting and independent redistricting and published widely in support of reforms in areas including the electoral college and mult-member districts for Congress.

The New America Political Reform Group works towards an open, fair democratic process, with equitable opportunities for full participation, in order to restore dynamism and growth to the American economy and society.

In order to implement Recommendation 1.3 by 2026, the Commission proposes the following milestone to complete by year-end of: