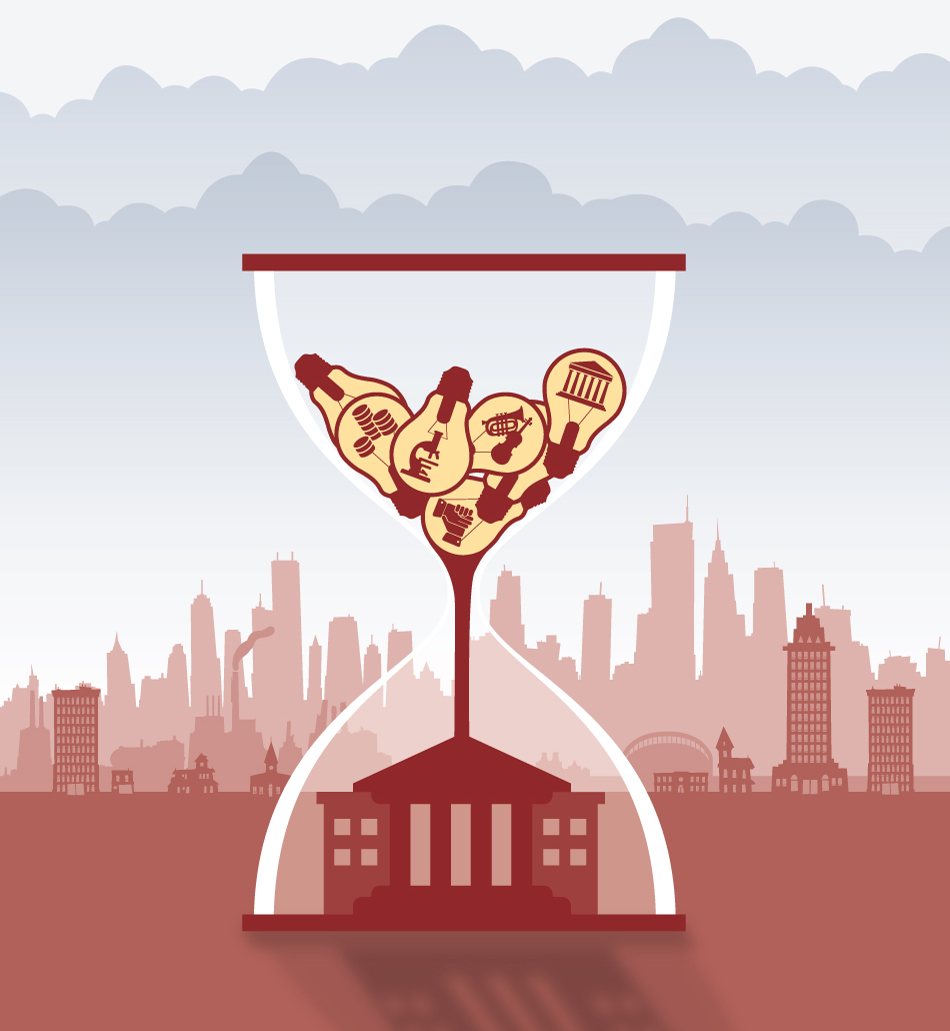 For the past one hundred and fifty years, state governments have been the principal funders of U.S. public research universities. Through much of that history, they have been willing and active partners in the academic enterprise. They have recognized the importance of these institutions to the intellectual, cultural, and commercial health of their local communities and regions—as well as to the nation as a whole—and they have invested public funds accordingly.

For a variety of reasons, state funding of public research universities has declined precipitously over the past decade, shrinking an average of 34 percent nationwide.3 These cuts are not necessarily the result of changes in political philosophy; rather, they reflect long-term structural changes in state finances. As a result of these cuts, public research universities have been forced to make difficult choices about institutional priorities. They have reduced expenses and raised tuition. For the moment, they have maintained their educational and research missions. But this trend is not sustainable. 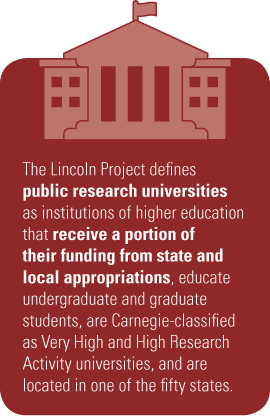 As states continue to reduce their contributions, tuitions will continue to rise and many of the services that public research universities provide—to students, states, and regions—will be threatened. Additional savings, unsupported by new strategies and new partnerships, cannot offset state cuts without compromising either the public character of public research universities (by making college less affordable) or their educational missions (by cutting back core programs and research).

The states must reinvest in public research universities; but for reasons described in this report, it will be difficult for them to restore public higher education funding to the levels reached even a decade ago, before the last recession. Universities must therefore work to diversify their revenue streams. To do so, they will need willing partners from the private and public sectors, both of which already benefit immensely from the contributions of public research universities.

When Abraham Lincoln signed the Morrill Act in 1862, providing federal lands to establish “colleges for the benefit of agriculture and the Mechanic arts” as well as “scientific and classical studies,” his goal was to prepare a wide segment of the population for productive lives in an increasingly industrialized nation. The act created a set of institutions that would evolve over time—a new system of publicly supported American higher education that would respond to the needs of Americans in every state and territory.4

During the century that followed the signing of the Morrill Act, public universities grew to provide a much broader set of educational opportunities than the act’s architects foresaw: they built new laboratories, theaters and cultural centers, athletic facilities, and hospitals; they educated and trained members of every profession; and they anchored regional economies. Indispensable as educational and research institutions, they became a central component of the nation’s intellectual infrastructure.

The American Academy created the Lincoln Project: Excellence and Access in Public Higher Education at a time when Abraham Lincoln’s experiment in public higher education is at risk. This report, the fifth and final Lincoln Project publication, recommends new strategies to help public research universities respond to changing societal, economic, and financial pressures. It offers a series of recommendations—highlighted with bold red text throughout the report and summarized in its conclusion—each of which would help sustain and strengthen public research universities over the long-term. The ideas collected in this report focus on three specific strategic directions:

Public research universities have been critical to the success of the nation and its citizens over the past one hundred and fifty years, and the services they provide to the public and the roles they occupy in our communities will be as critical to American success in the century to come. It is therefore imperative that these universities be preserved and strengthened for the good of the nation and to the benefit of students, local communities, and the states.

* A Federal Pell Grant is money awarded by the federal government to students in need of financial aid. For the 2016–2017 award year, the maximum award amount is $5,815.

4 The Morrill Act of 1862, authored by Vermont representative Justin Smith Morrill, was signed into law by President Abraham Lincoln following the secession by several Southern states from the United States and the outbreak of the Civil War. The act originally limited its beneficiaries to those states not “in a condition of rebellion or insurrection against the government of the United States,” though the act was extended to every state in the Union following the end of the Civil War. A second Morrill Act, passed in 1890, confronted the racial discrimination of Southern universities, requiring states either to demonstrate that race was not a university admissions criterion or to provide a separate land-grant university for persons of color. While the act thus countenanced racial segregation in higher education, it also led to the founding of several historically black colleges and universities.