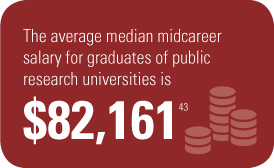 In the end, a university is only as successful as its students. Are they receiving a well-rounded education that prepares them for productive work and a fulfilling life? Are they learning to be creative thinkers and active citizens? As public research universities find ways to trim costs, form new partnerships, and adjust their offerings—all in response to new financial realities—they cannot lose sight of their foundational missions: to provide the best possible education to students who represent a true cross section of their state compositions. Fortunately, the intersections between the needs of students and the needs of the universities present practical opportunities to strengthen the whole enterprise. 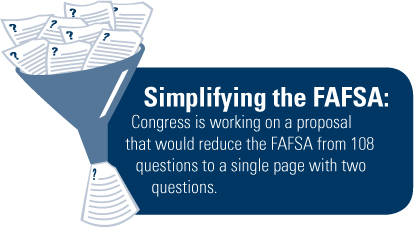 Every year, more than sixteen million students, usually with the help of their families, fill out the Free Application for Federal Student Aid (FAFSA).44 The FAFSA, administered by the U.S. Department of Education, allows college students to apply for federal grants (including Pell Grants), loans, and work-study funds. The application consists of 108 questions and 88 pages of instructions, the completion of which is overly complicated and burdensome, especially for low-income families and first-generation college students.45 While Congress has already enacted measures to simplify the application, more than one million students (most of whom are eligible for Pell Grants) still fail to complete the application each year, many simply discouraged by the complexities of the application.46 To help ensure equitable access for all qualified students, and also to reduce administrative costs, the financial aid system must be simplified. Since most of the information needed to calculate financial aid eligibility is already collected by the Internal Revenue Service (IRS), Congress is working to reduce the FAFSA to two questions: “What is your family size?” And “What was your household income two years ago?” Students would then submit an IRS Form 1040 to receive information about qualifying for loans, grants, and tax credits.47 This streamlined process, or some variation thereof, would be a dramatic step toward the goal of connecting financial aid with the students who most need it.

A simplified FAFSA would help more students find the means to attend public research universities. However, once students enroll, they are confronted with an entirely new set of challenges, including the pressure to graduate on-time. In 2013, the six-year graduation rate for first-time, full-time undergraduate students at public research universities was 62 percent.48 Institutions have long struggled to improve student time-to-degree rates, as well as student retention and graduation rates. But new advances in data analytics may provide administrators with the tools they need to monitor student achievement and offer remedial assistance where and when it is needed. 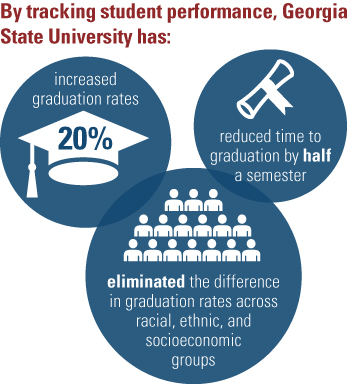 One of the most creative and effective uses of this strategy was pioneered at Georgia State University. With thirty thousand students, 87 percent of whom receive financial aid and 56 percent of whom are Pell Grant recipients, Georgia State serves an important segment of American society. Over the past decade, the university has dramatically improved retention and graduation rates across all ethnic and racial groups, even as its student body has become more diverse (61 percent came from underrepresented populations in 2015). By tracking information like student performance, grades, and class registration, and by applying a custom set of predictive analytics, Georgia State’s Web-based tracking system GPS (Graduation and Progression Success) Advising has been able to predict student success and progress and has fine-tuned a system for intervening when students are at risk of failing or dropping out. The system alerts advisers in real time when a student takes an action that threatens his or her progress, such as by failing a midterm. The one-on-one interventions led by advisors are inexpensive and effective, resulting in a 20 percent increase in graduation rates, reducing time to graduation by half a semester, and eliminating the differences in graduation rates among racial, ethnic, and socioeconomic groups.49

Faster time-to-degree rates, like easier access to financial aid, ultimately make postsecondary education more affordable for more students—and possibly less expensive for universities to provide. Improved transfer pathways from community colleges to four-year institutions, a particular concern of public research universities, produce similar benefits. Research has shown that students who transfer from community colleges to public universities are 1) more likely to come from lower-income families than are students who transfer from four-year institutions, and 2) more likely to complete their educations than are students who transfer to private nonprofit institutions or for-profit institutions.50 In the University of California system, more than one-third of incoming students are community college transfer students; and these transfer students graduate with the same grade point averages and at the same rates as students who entered university directly from high school.51 Transfer agreements such as 2+2 programs—which allow students to complete the first two years of their undergraduate education at a community college and then earn their degree after two years at a four-year institution—also enable diligent, qualified students to earn bachelor’s degrees at significantly reduced costs. One such program, Direct Connect at the University of Central Florida (UCF), guarantees admission to the university to students who earn an associate’s degree from one of several partner colleges.52 In 2014, associate’s-degree transfers earned 48 percent of all bachelor’s degrees awarded by UCF.53

Public research universities should work closely with transfer partners and continue to establish transfer pathways as important elements of their public missions that create opportunities for both individual students and institutional savings. They should also encourage the development of online interactive gateway courses and predictive tuition agreements between institutions. This would enable community college students to more easily complete required prerequisite courses at a set cost in advance of transferring to a four-year degree program.

Each of these innovations, from transfer programs to data analytics, serves universities as well as individual students and their families. They advance the social missions of public research universities by helping expand student populations, and they fulfill the fiscal responsibilities of university administrators by reducing expenses without sacrificing educational quality. Clearly, more can be done to improve student outcomes—which is more, not less important in an era of diminishing resources. But these relatively simple adjustments can have a major salutary effect on the experiences of millions of undergraduates.

43 The figure presented is the average of institutional median salaries at public research universities. This average is for midcareer salaries of alumni with bachelor’s degrees only. See PayScale, “2014–2015 PayScale College Salary Report,” http://www.payscale.com/college-salary-report.

46 Simplification measures already approved by Congress include the auto-zero test, which allows eligible students to check a box indicating that they have a household income of less than $24,000, automatically awarding them the maximum amount available through a Pell Grant, and the simplified needs test, which ignores assets for eligible students (such as those with household income of less than $50,000), thus increasing the number of students eligible for financial aid.

48 The 1990 Student Right-to-Know Act requires colleges to disclose information on the proportion of students “completing their program within 150 percent of the normal time to completion.” As a result, four-year colleges report the proportion of students who earn bachelor’s degrees within six years to the federal government through the Integrated Postsecondary Education Data System (IPEDS). See National Center for Education Statistics, IPEDS.