In his historic May 2016 speech in Hiroshima, President Barack Obama highlighted the need to strengthen the institutions that govern, however imperfectly, the initiation, conduct, and aftermath of war. The speech marked the first time a sitting American president had visited Hiroshima, a city the United States destroyed in August 1945 with a single atomic bomb. Obama ended his speech with a call for new human institutions to address the destructive power of nuclear weapons.

The Winter 2017 issue of Dædalus on “The Changing Rules of War,” guest edited by Scott D. Sagan (Stanford University), is a companion volume that examines the evolution of just war doctrine, the laws of armed conflict, the rules of engagement, war crimes tribunals, and other domestic and international organizational procedures that together constitute the “human institutions” that Barack Obama highlighted at Hiroshima.

An interdisciplinary group of authors—including scholars, military practitioners, lawyers, statesmen, and philosophers—have contributed insightful essays that look back at the history of these institutions and identify reforms that might strengthen them in the future.

Image:
A bulletin board with a posting of the Geneva Convention rights for detainees hangs in an exercise yard at the Camp 5 high-security detention center at the Guantanamo Bay U.S. Naval Base in Cuba. © 2008 by Randall Mikkelsen/Getty Images. 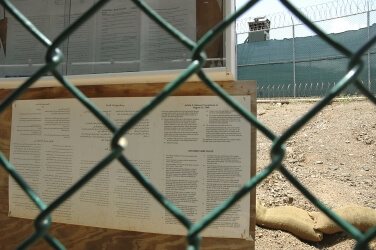 Image:
A bulletin board with a posting of the Geneva Convention rights for detainees hangs in an exercise yard at the Camp 5 high-security detention center at the Guantanamo Bay U.S. Naval Base in Cuba. © 2008 by Randall Mikkelsen/Getty Images.
Show: All | Free Only

A companion volume to “Ethics, Technology & War,” the Winter 2017 issue of Daedalus, “The Changing Rules of War,” guest edited by Scott D. Sagan, presents a collection of essays by an interdisciplinary groups of scholars and practitioners about the evolution of just war doctrine, the laws of armed conflict, the rules of engagement, war crimes tribunals, and other domestic and international organizational procedures. This essay highlights the importance of looking back to the history of these institutions to identify reforms that might strengthen them in the future and invites readers to join the active debate about just war doctrine.

Strategy & Entailments: The Enduring Roles of Law in the U.S. Armed Forces

Law has played a persistent role in the history of U.S. military engagements. Laura Ford Savarese and John Fabian Witt argue that the law of war tradition has persisted since the War of Independence because of an internal dynamic that makes it both strategically useful and costly for the United States to commit to rule-bound warfare. Invoking the laws of war to advance U.S. strategic interests entails consequences beyond the control of U.S. soldiers and statesmen, making reversals in position more costly and enabling critiques in the language of the law. But the law has remained useful not because it can claim neutrality, but because it has force independent of the interests for which it is mobilized.

The Face of Battle without the Rules of War: Lessons from Red Horse & the Battle of the Little Bighorn

This essay analyzes the extraordinary drawings of Red Horse, a Minneconjou warrior who fought at the 1876 Battle of the Little Bighorn, to provide insights into what warfare was like without just war doctrine or the laws of armed conflict to place constraints on violence. The artist’s candid vision of the battle and its aftermath portrays the indiscriminant brutality of the Great Sioux War, the disrespect given to a hated enemy, and the lingering desire for revenge. But the drawings also reveal the pride of victory and the trauma of defeat. In addition to providing a window into the past, the Red Horse drawings provide a lens to help us understand the atrocities committed by the Islamic State and Al Qaeda today and a mirror that can help us more clearly see ourselves.

Limiting Civilian Casualties as Part of a Winning Strategy: The Case for Courageous Restraint

Military commanders have a moral obligation to abide by international norms and humanitarian laws governing the treatment of noncombatants. But how much risk to their own forces they should take on to limit civilian harm is unclear. The principle of proportionality all but necessitates a utilitarian calculation: potential harm to civilians balanced against military value. Joseph H. Felter and Jacob N. Shapiro show that in asymmetric conflicts, information flows, collaboration, and the support of the local population are key to achieving strategic objectives. Thus, limiting noncombatant casualties is a part of a winning strategy. The conclusion is expressed through the doctrine of “courageous restraint,” which has helped guide NATO and U.S. forces fighting in Afghanistan.

Just war theory advocates for the moral equality of soldiers: combatants have equal rights to wage war against one another and are entitled to certain protections if captured. But in asymmetric conflicts, it’s unclear whether and how this principle should apply. Allen S. Weiner argues that nonstate fighters, or “unprivileged belligerents,” should be granted war rights in some contexts. But, like all lawful combatants, they must not violate the laws of war, for example, by intentionally targeting civilians, and they are still subject to prosecution for war crimes without regard to their group’s entitlement to war rights.

Stay the Hand of Justice? Evaluating Claims that War Crimes Trials Do More Harm than Good

Whether and how to punish those responsible for war crimes is an enduring dilemma. War crimes trial skeptics argue that such trials endanger prospects for peace by encouraging enemies to continue fighting, that they achieve only “victors’ justice,” and that they are unnecessary due to the existence of more effective and less costly alternatives. Mark S. Martins and Jacob Bronsther argue, in accordance with a “moderate retributivism,” that when carried out consistently with established law and procedure, and when not dramatically outweighed by concerns that trials will exacerbate ongoing or future conflicts, prosecutions are a legitimate and sometimes necessary response to violations of the laws of war and international criminal law.

The Distant Promise of a Negotiated Justice

A basic dilemma for political transitions and peace talks is whether to hold perpetrators of mass atrocities accountable or to negotiate a deal. Political realities have impinged on efforts to hold trials, provoking a backlash by powerful individuals determined to spoil the peace rather than sacrifice their personal freedom. But when international criminal tribunals fail to prosecute powerful spoilers, they have been condemned for their hypocrisy or charged with being selective in their pursuit of justice. Leslie Vinjamuri, addressing the accountability dilemma, suggests accepting transitional justice compromises when they have a reasonable prospect of delivering peace and possess a strong base of support among those most affected by political violence.

Just war theorist Michael Walzer has long advocated for noncombatant immunity, proportionality, and combatant equality. But in recent years, the revisionist school of just war theory, led by Jeff McMahan, among others, has radically undermined the defense of these principles. Seth Lazar illustrates the disturbing vision of the morality of war that results from revisionist premises, showing how broadly Walzerian conclusions can be defended using more reliable foundations.

Victory in war goes beyond the last shot fired; a more healthy society must emerge. Antonia Chayes and Janne E. Nolan argue for the practical necessity of reconstruction after war. But in order to learn how to achieve such a consolidation of military victory, a shift in mindset is required from both civil and military policy-makers and planners. And a change in practice is needed at the very beginning of planning for war, requiring an unprecedented degree of domestic and international cooperation.

The Epidemiologic Challenge to the Conduct of Just War: Confronting Indirect Civilian Casualties of War

Most civilian casualties in war are not the result of bombs and bullets; they are due to the destruction of the essentials of daily living, including food, water, shelter, and health care. But these “indirect” effects are often invisible, and are largely neglected by just war principles and global humanitarian response. Paul H. Wise suggests that recent technical advances make such neglect increasingly unacceptable: our improved ability to measure indirect effects and the unprecedented progress of our ability to prevent or mitigate the indirect casualties of war.