What’s New About the Old

Fascination with Greco-Roman culture continues to drive academic curricula and popular interest, in spite of recent data signaling a decline in the study of the humanities. New developments in the study of the ancient world—integrating methodological, philosophical, and technological advances—have, in some cases, revolutionized our understanding of the past, opening up a new realm of classical studies for the twenty-first century.

This period of discovery is due in large part to a new generation of classicists who are reshaping our access to and understanding of Greco-Roman culture. Innovative, multidisciplinary approaches that often apply cutting-edge science and technology to the study of the ancient world are yielding new questions and altering our engagement with the past. For example, not only have novel technologies enabled the discovery of new literary papyri, but methodological changes have altered which texts scholars might use to piece together ancient worldviews. This “new science of antiquity”—including multispectral imaging, 3D laser scanning, and bioarchaeology—is enabling researchers to reconstruct previously inaccessible data and documents, revealing, for example, mysteries about ancient ecosystems and deciphering papyri carbonized during the eruption of Vesuvius.

As guest editor Matthew S. Santirocco (New York University) observes in his introduction to the issue, “the past is still very much alive in the present.” This is evidenced by the major themes explored by the contributors to the Spring 2016 issue of Dædalus on “What’s New about the Old,” including: 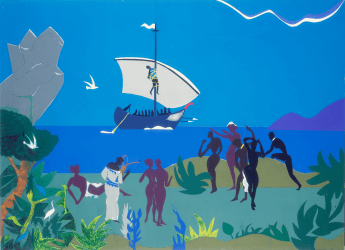 Tragedy in the Crosshairs of the Present

At the same time that Greek literary studies have broken down boundaries of canon and genre, opening up for analysis previously ignored families of texts, the rise of reception studies has raised new questions about how our present cultural and historical position shapes our interpretations of them. These developments are explored through the case study of Greek tragedy, the most canonical of genres.

Having adopted as their own the literature of a conquered empire, the Roman elite self-consciously sought to translate the Greek canon into a thoroughly Roman form of expression, leaving behind the pleasurable, poetic, and sensual language of the Greeks. Could the Romans protect their militaristic and masculine integrity in this transference, or did the Greeks get their revenge, ultimately “conquering” Rome through literary influence?

The New “Brothers Poem” by Sappho

The “Brothers Poem” was one of two textual fragments by the poet Sappho recently discovered on a papyrus. The poem—which may be a sister’s prayer for the safe return of one brother, a merchant sailor, and the growth to maturity of another brother—is here translated into English by Rachel Hadas.

Classicists have turned to reception studies to understand the unique encounters that various historical audiences have had with Greek and Roman literature. This essay explores the cultural mobility of the classics through a Malawian reception of Sophocles’s Antigone.

Having published her celebrated English translation of the Iliad in 2015, Caroline Alexander is uniquely positioned to reflect on the process (and challenges) of rendering a modern translation of Homer. She analyzes her work, and that of previous translators, using the principles outlined by the Victorian poet and critic Matthew Arnold.

Philosophy & Its Classical Past

Though some recent philosophical schools have rejected their classical past, attempting to set their arguments on wholly new foundations, a renewed philosophical engagement between the old and new has elsewhere initiated major new debates. Focusing on the philosophy of death, Phillip Mitsis shows how ancient philosophy both inspires new ideas and new modes of public discourse and criticism.

Michael C. J. Putnam’s explication of a famous passage by Catullus displays traditional philological rigor, while also being informed by contemporary literary approaches, such as intertextuality, feminism, and genre studies. In this way, Putnam’s analysis is representative of the widening and cross-disciplinary methodological approaches of classicists.

The Matter of Classical Art History

Greco-Roman visual art is often isolated within the larger discipline of art history, which focuses increasingly on the modern and non-Western. But recent scholarship has built on archaeological and literary studies to situate Greco-Roman visual art within the dynamic contexts that produced them. Using Pliny the Elder’s Natural History, Verity Platt raises questions about the artist’s relationship with his materials, models of perception, and “the slippage between medium and representation.”

Texts written on stone and metal (including coins), ostraca (potsherds), wooden tablets, and papyri have become critical documents for twenty-first-century historical researchers of the ancient world. Two “materializing revolutions” have signaled this shift in papyrology, moving from predominantly literary and philological approaches toward a broader cultural history of the ancient world built on collaboration with archaeological methodology.

Memory, Commemoration & Identity in an Ancient City: The Case of Aphrodisias

Using the case study of the ancient city of Aphrodisias in modern-day Turkey, Angelos Chaniotis explores how civic, religious, and social identities competed and overlapped in ancient Greece. By analyzing the content, context, and changing uses of stone inscriptions in Aphrodisias, Chaniotis constructs a centuries-long narrative of shifting identities, concluding in the mid-seventh century CE, when the “City of Aphrodite” was rechristened as Stauropolis, the “City of the Cross.”

The Environmental Fall of the Roman Empire

Revisiting that classic problem of ancient history—the fall of Rome—Kyle Harper uses new scientific data and approaches to argue that a cascade of environmental disasters, more than any single event, pushed Rome’s resilient economy and agricultural system to the breaking point. The effects of climate change, including food crises in Egypt resulting from the Nile’s failure to flood, and the devastating Antonine Plague and Plague of Cyprian were, in a sense, “the revenge of [Rome’s] giant imperial ecology.”

The Scientific Study of Antiquity

Breakthroughs in archaeological science, combined with new approaches to interpreting classical texts, have begun to deliver major new insights into the physical realities and mentalities of the classical world. This short essay introduces some of these scientific advances, and argues that profiting from them requires a robustly interdisciplinary skill set.

What is Ancient History?

Two competing models of ancient history have dominated academic discourse for the last three centuries: the classical model, which regards ancient Greece and Rome as the beginning of human history that “matters,” and the evolutionary model, which is global in outlook and goes back to the origins of humanity. But the new evidence and methods available to scholars in the twenty-first century may finally push the conversation in a new direction, forcing the schools to engage with each other more deeply; this essay proposes such a comparative approach and considers its potential.

With undergraduates increasingly pursuing vocational studies, what can the classics offer prospective students? The field’s experimentation and diversity of thought (literary, historical, philosophical, archaeological) remain its strengths, and its proponents should advocate for pure research, as do the sciences, by disseminating knowledge of the past through popular media and online courses, which can reach a broader public and make classical teaching a public good.

Greco-Roman Studies in a Digital Age

What responsibility do classicists have to share their research with the general public? And how can classicists justify their existence if they isolate themselves from non-specialists? Gregory Crane considers the role of classics in modern society, and looks to the future by way of the transformative power of technology, the “extent to which the shift from print to a digital space changes how the classics can contribute to society as a whole.”