Christopher F. Chyba is Professor of Astrophysical Sciences and International Affairs at Princeton University. He is Cochair of the “Meeting the Challenges of the New Nuclear Age” project at the American Academy, and has previously served on the staffs of the National Security Council and the Office of Science and Technology Policy, and as a member of the President’s Council of Advisors on Science and Technology.

Robert Legvold, a Fellow of the American Academy since 2005, is the Marshall D. Shulman Professor Emeritus at Columbia University. He is Cochair of the “Meeting the Challenges of the New Nuclear Age” project at the American Academy, for which he wrote the research papers “Contemplating Strategic Stability in a Multipolar Nuclear World” (2019) and “Meeting the Challenges of the New Nuclear Age: Nuclear Weapons in a Changing Global Order” (with Steven E. Miller and Lawrence Freedman, 2019). His most recent book is Return to Cold War (2016).

If the fear of nuclear war has faded as the Cold War recedes into the misty past, we may need to remind ourselves of what these weapons can do. At least five of the nine countries that currently possess nuclear weapons can deliver thermo­nuclear warheads, each with the explosive equivalent of several hundred thousand tons of TNT, nearly halfway around the Earth. The intercontinental ballistic missiles (ICBMs) and submarine-launched ballistic missiles (SLBMs) that would deliver them at this range are called “strategic” because they can reach into an adversary’s homeland to destroy leadership, military, infrastructure, or civilian targets. Warheads on different missiles are characterized by their yield (explosive energy) and their accuracy. Estimates in the open literature suggest that the United States, for example, can deliver a 455 kiloton warhead launched from a Trident ballistic missile submarine over six thousand miles to detonate within the length of a football field of its target. The yield of 455 kilotons means that the energy released would equal the explosive energy of 455,000 kilograms (about one million pounds) of high explosive (TNT), which would be more than thirty times the energy released by the nuclear weapon detonated by the United States over Hiroshima during World War II. Depending on the relative location of the submarine launching the SLBM and its intended target, the time between the launch and the detonation of the warhead could be as short as six to ten minutes. An adversary might have only that much warning time to recognize that an attack was underway and react.

Some Russian and Chinese strategic missiles are thought to carry warheads of even larger explosive yields. For example, the Russian SS-19 Mod 3 ICBM carries six independently targetable warheads (MIRVs) that reportedly have a yield as high as 750 kilotons. Figure 1 shows the effects of one such 750-kiloton warhead exploding 1 mile (1.6 kilometers) above New York City, centered on Midtown Manhattan. The four concentric rings in the figure illustrate the effects of the explosion. Moving outward from the point of detonation: Within the first ring (radius 2.5 kilometers) the blast is so strong that even heavily built concrete buildings are demolished. Virtually every person within this area is killed in the blast. This ring extends entirely across the island of Manhattan from the East River to the Hudson. The second ring (radius 5.7 kilometers) reaches into New Jersey and the boroughs of Brooklyn and Queens. It marks the distance out to which residential buildings collapse. At this distance, “injuries are universal and fatalities are widespread.” The third ring (radius 11 kilometers) shows the effects of the immediate thermal radiation (high intensity ultraviolet, visible, and infrared light emitted by the explosion). Out to this distance, anyone with a line of sight to the detonation suffers third-degree burns to exposed skin. Finally, the fourth ring (radius 15 kilometers) marks the distance out to which windows shatter, with resulting injuries from flying glass. Overall, more than 1.8 million people would be killed nearly instantly, and over 2 million more immediately wounded. These numbers ignore the effects of firestorms–massive urban fires driven by hurricane-force winds that may result from the nuclear detonation–as well as longer-term radiation and fallout. Of course, many hospitals and firehouses would be destroyed, and many medical personnel immediately killed, limiting the life-saving potential of first-responders. 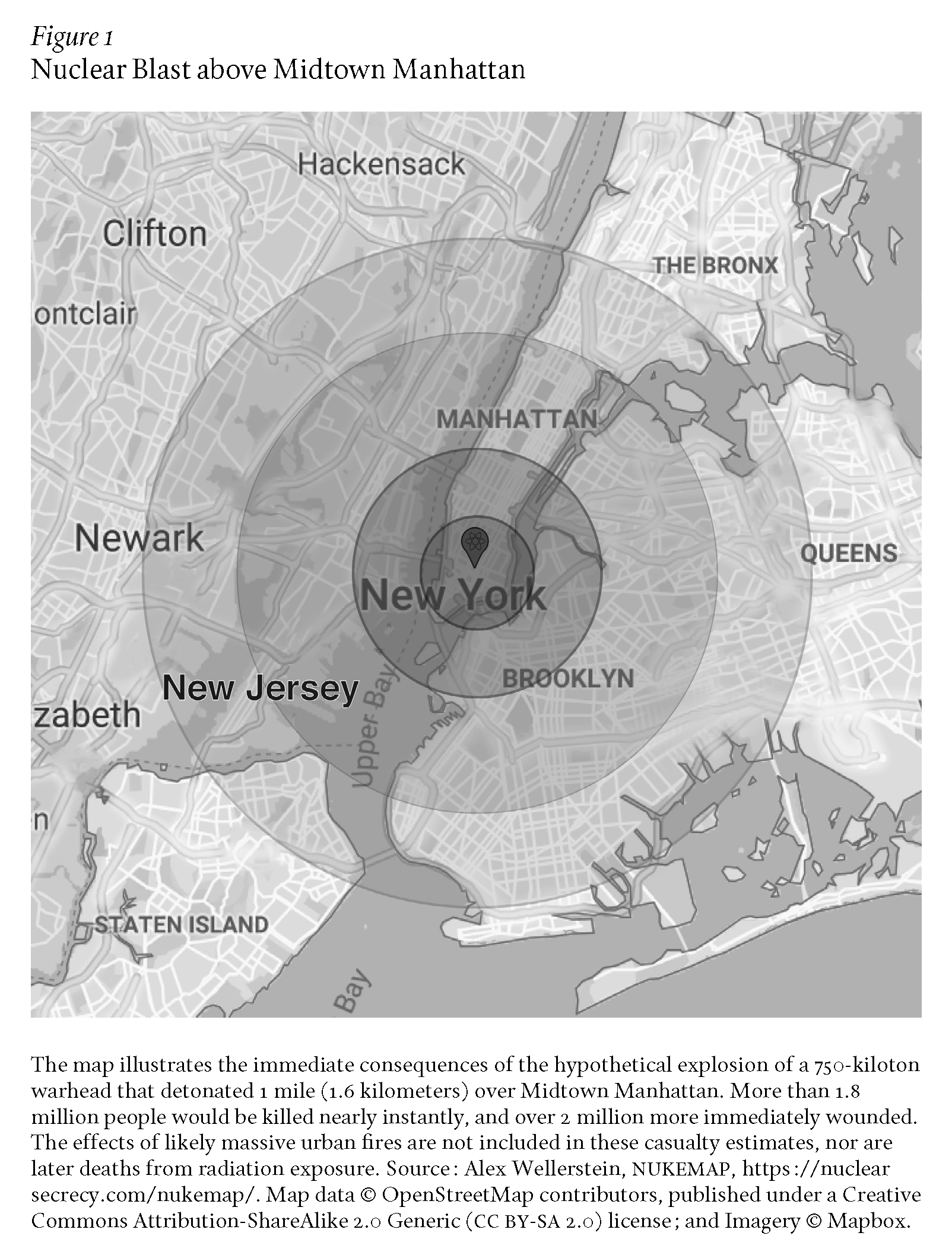 These results are for a single large strategic warhead. Under the 2011 New START arms control treaty, Russia and the United States agreed to reduce their numbers of deployed strategic warheads to 1,550 on each side. China, France, and the United Kingdom have smaller numbers of warheads on missiles, estimated at about 290, 300, and 225 warheads, respectively. In a nuclear war, or a conventional war that escalated to the use of strategic nuclear weapons, many–perhaps hundreds or more–such detonations might take place.