How did music in the twentieth century both influence and reflect American culture? The Fall 2013 issue of Dædalus examines how music – in Hollywood films, in concert halls, in private homes and public spaces – helped shape our modern selves.

The issue is guest-edited by Gerald Early, an essayist, culture critic, and professor at Washington University in St. Louis, together with musicologists Patrick Burke and Mina Yang. In his introduction, Early notes that technology has made music ubiquitous, changing the way we interact with and perceive it. No longer constrained to live performances and stereos, music is now portable, editable, and easily obtainable. This shift, along with a growing focus on the concept of identity, has rendered music a powerful tool – socially, politically, and culturally. 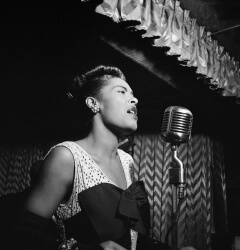 Introduction: This is Our Music

Listening to the Now

Homophobia in Twentieth-Century Music: The Crucible of America’s Sound

Swing: From Time to Torque (Dance Floor Democracy at the Hollywood Canteen)

Pioneers of the Concept Album

The Sound of Racial Feeling

Satchmo’s Shadow: An Excerpt from “Satchmo at the Waldorf”

Excerpts from “Passport to Paris”

A Good Chord on a Bad Piano