Immigration & the Future of America

Despite America’s history and reputation as a “melting pot,” immigration continues to polarize policy-makers and is at the top of the agenda as Congress returns to Washington following the July 4 recess. The Summer 2013 issue of Dædalus, the Journal of the American Academy of Arts and Sciences, examines the origins and characteristics of new immigrants and considers their reception in the United States, with regard to both public policies and private behavior. The issue, “Immigration and the Future of America,” is guest edited by Douglas S. Massey, a leading expert in the sociology of immigration.

Whereas immigration to the United States during the half-century from 1915 to 1965 was small by historical standards, the four decades from 1970 to 2010 witnessed a remarkable revival of population flows from abroad. By 2010, the percentage of foreigners in the United States had rebounded to nearly 13%, much closer to its historical peak of 14.7% in 1910. Most of the new entrants hailed from Asia and Latin America.

Unlike past immigrants, many foreigners living in the United States today are present without authorization. According to estimates, roughly one-third of these individuals are undocumented, and although Hispanics and Asians now account for around 20% of the total population, they make up nearly a third of all births. Thus, the future of the United States is very much tied to the status and welfare of immigrants and their children.

Image:
A naturalization ceremony at Fenway Park in Boston, September 17, 2008. More than 3,000 people took the oath of citizenship during the ceremony. © by AP Photo/Steven Senne/Corbis Images. 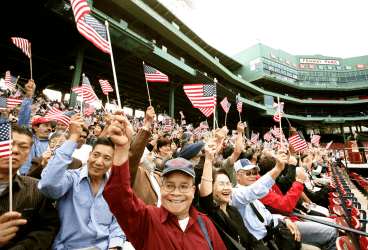 Image:
A naturalization ceremony at Fenway Park in Boston, September 17, 2008. More than 3,000 people took the oath of citizenship during the ceremony. © by AP Photo/Steven Senne/Corbis Images.
Show: All | Free Only
Free

Douglas Massey discusses how and why U.S. policies intended to stop Latin American immigration to the United States not only failed, but proved counterproductive by ultimately accelerating the rate of both documented and undocumented migration from Mexico and Central America to the United States. As a result, the Latino population grew much faster than demographers had originally projected and the undocumented population grew to an unprecedented size.

Immigration has remade and changed American society since the nation's founding, and an understanding of the past can help illuminate the immigrant experience in the present. This essay focuses on three central questions: What is new about the most recent immigrant wave? What represents continuity or parallels with the past? And how have migrant inflows in earlier historical periods changed the social, economic, political, and cultural contexts that now greet – and shape the experiences of – the latest arrivals?

The Contributions of Immigrants to American Culture

The standard account of American immigration focuses on the acculturation and assimilation of immigrants and their children to American society. This analysis typically ignores the significant contributions of immigrants to the creation of American culture through the performing arts, sciences, and other cultural pursuits. Immigrants and their children are not born with more creative talents than native-born citizens, but their selectivity and marginality may have pushed and pulled those with ability into high-risk career paths that reward creative work.

This essay provides an overview of immigration from Latin America since 1960, focusing on changes in both the size and composition of the dominant streams and their cumulative impact on the U.S. foreign-born population. Marta Tienda and Susana M. Sánchez briefly describe the deep historical roots of current migration streams and the policy backdrop against which migration from the region surged.

Why Asian Americans are Becoming Mainstream

In contrast to earlier waves of immigration, the post–1965 Asian immigration to the United States has not spawned an exclusionist backlash among native whites. Rather, the new Asian immigrants and their children are rapidly gaining access to the American mainstream. Whether in integrated residential communities, in colleges and universities, or in mainstream workplaces, Asian Americans' presence is ever more the rule, not the exception.

This article focuses on settlement trends of immigrants during the periods that bookend the twentieth century, both eras of mass migration. It compares settlement patterns in both periods, describing old and new gateways, the growth of the immigrant population, and geographic concentration and dispersion. Historically, immigrants have been highly concentrated in a few places.

Using New York City as an example, this essay examines how American cities that have a long and continuous history of absorbing immigrants develop welcoming institutions and policies for current immigrants and their children. Cities such as Chicago, San Francisco, and New York have been gateway cities for many previous waves of immigrants and continue to absorb new immigrants today.

Helen Marrow outlines a long-term research agenda on immigrant assimilation by calling on scholars to be more explicit about how they model and measure assimilation, and to move away from previously aspatial approaches to the topic. After briefly overviewing the field, she draws on original qualitative data from a new immigrant destination region to highlight several places where she believes scholars can better clarify definitions of and assumptions about assimilation, as well as choices about and interpretations of data, to foster transparency and facilitate scholarly discovery.

Immigration & the Color Line at the Beginning of the 21st Century

The “color line” has long served as a metaphor for the starkness of black/white relations in the United States. Yet post-1965 increases in U.S. immigration have brought millions whose ethnoracial status seems neither black nor white, boosting ethnoracial diversity and potentially changing the color line. After reviewing past and current conceptualizations of America's racial divide(s), we ask what recent trends in intermarriage and multiracial identification – both indicators of ethnoracial boundary dissolution – reveal about ethnoracial color lines in today's immigrant America.

While the United States historically has been a polyglot nation characterized by great linguistic diversity, it has also been a zone of language extinction in which immigrant tongues fade and are replaced by monolingual English within a few generations. In 1910, 10 million people reported a mother tongue other than English, notably German, Italian, Yiddish, and Polish. The subsequent end of mass immigration from Europe led to a waning of language diversity and the most linguistically homogenous era in American history.

In the next quarter century, North American and Western European societies will face a profound transformation of their working-age populations as a result of immigration, combined with the aging of native majorities. These changes will intensify the challenges of integrating the children of low status immigrants.

Modernization for Emigration: Determinants & Consequences of the Brain Drain

This essay reviews existing theories of professional emigration as background to examine the present situation. Classical theories of the brain drain neglected the possibility that immigrant professionals would return to their home countries and make significant investments and economic contributions there.

The Illegality Trap: The Politics of Immigration & the Lens of Illegality

The focus on undocumented immigrants in contemporary U.S. immigration debates, often at the expense of other immigration issues, has led to an illegality trap. This situation has serious negative consequences for both U.S. immigration policy and immigrants, including an overwhelming emphasis on enforcement; legislative gridlock and the failure of comprehensive immigration reform; constitutional conflict resulting from tensions between national, state, and local approaches to dealing with undocumented immigration; and the puzzling absence of federal policies addressing immigrant integration.

The Criminalization of Immigrants & the Immigration-Industrial Complex

Immigration, Civil Rights & the Evolution of the People

In considering what it means to treat immigration as a “civil rights” matter, Cristina Rodríguez identifies two frameworks for analysis. The first, universalistic in nature, emanates from personhood and promises non-citizens the protection of generally applicable laws and an important set of constitutional rights. The second seeks full incorporation for non-citizens into “the people,” a composite that evolves over time through social contestation – a process that can entail enforcement of legal norms but that revolves primarily around political argument.