Civil wars continue to be a frequent and debilitating phenomenon in international politics. Of the approximately 200 countries in the world, there are currently 30 civil wars underway, including several in which the U.S. military is directly and deeply enmeshed.

Many of these wars are unfolding in states with limited capacities to respond to and mitigate the security consequences that emanate from internal violence and state disorder. Almost all of these consequences, in one form or another, are the sources of immense human suffering and regional instability. And when combined with other global threats, such as pandemics and transnational terrorism, civil wars might ultimately claim a staggering number of lives.

Responding to these circumstances, the Academy launched an 18-month project on Civil Wars, Violence, and International Responses. The initiative brings together experts across disciplines and around the world to examine why states break down, what the impact of state disorder and failure is within and beyond national borders, whether there are universal qualities or regional characteristics of violent conflicts, and how and when external actors can effectively intervene in civil wars.

The Fall 2017 issue of Dædalus is the first publication of the American Academy project. The second volume, “Ending Civil Wars: Constraints & Possibilities,” was published in January 2018. 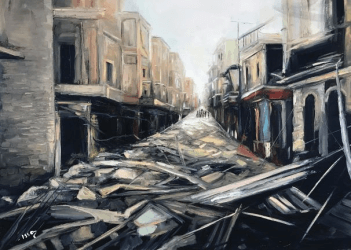 There are some thirty ongoing civil wars – Syria, Afghanistan, and Iraq among the high-profile cases – with the average duration of conflict increasing over the past twenty years. Yet foreign-policy practitioners and scholars disagree on the risk that high levels of intrastate violence pose to major powers and global stability; they also disagree on the extent to which external powers can influence the trajectories of these conflicts or improve governance in areas affected by civil war. Part of an eighteen-month Academy project on Civil Wars, Violence, and International Responses, the essays in the Fall 2017 issue of Dædalus describe the causative factors of and responses to civil wars in the modern era. The companion Winter 2018 issue will consider the impediments to ending civil wars and offer policy recommendations.

The global spread of civil war up to the early 1990s and the partial recession since then are partially due to policy responses by major powers working principally through the United Nations. But civil war and state collapse in the Middle East and North Africa region in the last fifteen years have been more resistant to “treatment” by international peacekeeping operations, and have more directly affected the major powers and international security. James D. Fearon examines the characteristics of civil wars in this region and highlights the failures of third parties to help locals build a self-governing, self-financing state within UN-recognized borders or, in some cases, any borders.

Since the Cold War, there has been more creation of wealth and a greater reduction of poverty, disease, and food insecurity than in all of previous history. The numbers and lethality of wars have also decreased. Bruce D. Jones and Stephen John Stedman therefore contend that there is no global crisis of failed states, of endemic civil war, of refugees and migration, or of disorder. Instead, a particular historical crisis has unfolded in the greater Middle East, collapsing order there and feeding the biggest threat to international order: populism in the United States and Europe.

U.S. policy for engagement in war-torn states assumes that internal violence generates cross-border spillovers with negative consequences for U.S. and global security. But Stewart Patrick suggests that war-torn states are not the primary drivers of transnational terrorism, organized crime, and epidemics. Of greater concern are relatively functional states that maintain certain trappings of sovereignty but are institutionally anemic, due to endemic corruption and winner-take-all politics. Ultimately, the most important U.S. stakes in war-torn countries are moral and humanitarian: namely, the imperative of reducing suffering among fellow members of our species.

Since the 1980s, jihadism, a form of violent transnational activism, has mobilized civil war rebels, outside entrepreneurs, foreign fighters, and organizers of transnational as well as domestic terrorism. Jihadism, however, is neither unitary nor monolithic: it contains competing power centers and divergent ideological orthodoxies. Martha Crenshaw examines the evolution of the relationship between jihadist terrorism and civil wars, beginning in the 1980s in the context of the Soviet invasion of Afghanistan.

This essay confronts the collision of two potential global threats: the outbreak of infectious pandemics and the outbreak and protraction of civil wars. Paul H. Wise and Michele Barry address the potential that civil wars can elevate the risk of emerging infectious outbreaks and reduce the capacity to identify and respond to them, generating political and security challenges that may threaten regional and international order. They find that global health governance and international security structures seem inadequate to address these challenges, and that new approaches that better integrate the technical and political challenges inherent in preventing pandemics in areas of civil war are urgently required.

A tragic output of civil war, large-scale displacement crises also become enmeshed in the politics, security, and economics of conflict. But policy-makers often mistakenly view host-state security and refugee security as unrelated – or even opposing – factors. Sarah Kenyon Lischer asserts that refugee protection and state stability are linked together: policies to protect refugees, both physically and legally, reduce potential threats from the crisis and bolster state security.

What threats do organized crime and illicit economies, such as the global drug trade, pose to states and the international order? Vanda Felbab-Brown analyzes the responses by states and the international community to the nexus of criminal economies and civil wars, insurgencies, and terrorism, highlighting how premature and ill-conceived government efforts to combat illicit economies can have counterproductive effects, hampering efforts to suppress militancy and, in some cases, generating dangerous international spillovers of criminality. She also examines various pathways out of the conflict-crime nexus and offers some policy recommendations.

Civil Wars as Challenges to the Modern International System

The current international system is based on Westphalian principles in which authority is defined territorially, within which the state has sole jurisdiction. Adherence to these principles has contributed to the decline of interstate war, but, for states that gained independence after 1945, it has contributed to civil conflicts. The norms are opaque and provide poor guidelines as to when, and on which grounds, external intervention in civil wars might be warranted. Hendrik Spruyt argues that the degree to which the combatants challenge Westphalian principles should guide policy responses. Furthermore, the international legal regime should reconsider partition as a potential solution to civil wars.

State failure is rooted in decades of personalist rule, as leaders have sought to fragment and disorganize institutions and social groups that they thought would be possible bases of opposition. Once considered particular to sub-Saharan Africa, now parts of the Middle East and Central Asia exhibit this connection. William Reno explores the dilemma that confronts policy-makers: it is possible to prop up personalist regimes that present themselves as bulwarks against disorder and terror, but doing so supports the domestic strategies of governance that play a central role in creating the conditions of protracted multisided warfare in the event that the regimes fail.

Conflicts now often occur in states with elections, and voters have sometimes been directly involved in the process to end civil conflict to overcome elite divisions. But the 2016 popular plebiscite in Colombia proved that referendums and other tools of direct approval by voters seem to amplify elite divisions rather than strengthen peace processes. Aila M. Matanock and Miguel García-Sánchez suggest that focusing instead on traditional elite-led negotiations seeking to satisfy each faction may have a better chance of producing signed settlements.

It has been taken for granted that the United States would remain the strongest power in the international political system, leading a liberal coalition of other strong states. But Barry R. Posen asserts that though the United States is likely to remain more powerful than its global competitors, several powers have emerged to challenge U.S. leadership, producing a multipolar system. This is likely to magnify disagreements about how states suffering civil wars should be stabilized, limit preventive diplomacy, produce external intervention that will make for longer and more destructive wars, and render settlements more difficult to police.