It is simple to hope for an end to the world’s civil wars–nearly thirty of which are underway right now–but it is not at all simple to bring these conflicts to an end when the causes are wide-ranging, the effects are extensive, the international response is uncertain, and the solutions are elusive.

The Academy’s 18-month project on Civil Wars, Violence, and International Responses, directed by Karl Eikenberry (Stanford University; Lieutenant General, U.S. Army, retired; former U.S. Ambassador to Afghanistan) and Stephen D. Krasner (Stanford University), brings together experts across disciplines and from around the world to examine why states break down, what the impact of state disorder and failure is within and beyond national borders, whether there are universal qualities or regional characteristics of violent conflicts, and how and when external actors can effectively intervene in civil wars.

The Winter 2018 issue of Dædalus identifies impediments to ending civil wars and offers policy prescriptions for states and for the international community facing the spread of instability and humanitarian crises, including pandemic diseases and transnational terrorism. This issue of Dædalus is the second publication of the American Academy project on Civil Wars and is a companion to the Fall 2017 issue of Dædalus, “Civil Wars & Global Disorder: Threats & Opportunities,” which explored the causative factors of civil wars, the connection of intrastate strife and transnational terrorism, and the many direct and indirect consequences associated with weak stages and civil wars, including the dangers posed by pandemics, mass migrations of people, and great-power proxy warfare.

Image:
A displaced woman carries goods as United Nations Mission in South Sudan (UNMISS) peacekeepers patrol outside the premises of the UN Protection of Civilians (POC) site in Juba on October 4, 2016. © 2016 by Albert González Farran/Getty Images. 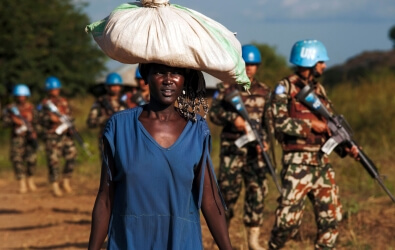 Image:
A displaced woman carries goods as United Nations Mission in South Sudan (UNMISS) peacekeepers patrol outside the premises of the UN Protection of Civilians (POC) site in Juba on October 4, 2016. © 2016 by Albert González Farran/Getty Images.

Part of an eighteen-month Academy project on Civil Wars, Violence, and International Responses, the essays in the Winter 2018 issue of Dædalus consider the impediments to ending civil wars and offer policy recommendations for states involved in conflict and for the international community. The companion Fall 2017 issue of Dædalus describes the causative factors of civil wars in the modern era, examines the security risks posed by intrastate violence, and explores the challenges confronting external actors.

England experienced a civil war every fifty years from the Norman Conquest up until the Glorious Revolution of 1688–1689. After that point, England was completely stable, due to the slow accumulation of and respect for law and the emergence of a strong English state and sense of national identity. This suggests that normative factors are very important in creating stable settlements. Rational choice explanations for such outcomes assert that stalemated conflicts will lead parties to accept second- or third-best outcomes. But Francis Fukuyama suggests that stability requires normative change as well.

Religionist Rebels & the Sovereignty of the Divine

Some of today’s most vexing rebels—those, such as the Islamic State, that reject the Westphalian state system and depend on an almost entirely religious justification for their cause—have unlimited war aims and are unwilling to negotiate with the states whose sovereignty they challenge. Tanisha M. Fazal defines these groups as “religionist rebels” and explores the particular challenges they pose in the civil war context, while showing that they have been present throughout the history of the state system.

Stathis N. Kalyvas decouples violent jihadism from both religion and terrorism and proposes an alternative, nonexclusive understanding of jihadi groups as rebel groups engaged in civil wars. Arguing that jihadi groups can be profitably approached as the current species of revolutionary insurgents, he offers a comparison with an older species, the Marxist rebels of the Cold War. He points to a few significant similarities and differences between these two types of rebels and draws some key implications, ultimately stressing the great challenges facing jihadi rebels in civil wars.

Civil wars currently underway in Libya, Syria, and Yemen demonstrate that patterns of economic governance during violent conflict exhibit significant continuity with prewar practices. Civil wars in the Middle East have not created conditions conducive to reconceptualizing sovereignty or decoupling sovereignty and governance. Rather, parties to conflict compete to capture and monopolize the benefits that flow from international recognition. Steven Heydemann asserts that, to the extent that wartime economic orders reflect deeply institutionalized norms and practices, postconflict conditions will limit possibilities for interventions to overcome state fragility.

Is Prevention the Answer?

Is prevention the answer to escalating violent conflict? Conflict prevention depends on the credibility of policy-makers’ commitment to deter future violence using carrots and sticks. But Charles T. Call and Susanna P. Campbell argue that there are several political and bureaucratic barriers that make this unlikely: preventing violence in a faraway, nonstrategic country is difficult to sell; decision-makers often avoid making difficult decisions until a crisis forces them to act; and preventive actions require the use of precious political capital for uncertain or invisible outcomes. They offer that perhaps in overcoming these obstacles, conflict prevention will become a more credible solution to violent conflict.

The Sri Lankan Civil War (1983–2009) was a result of the colonial and postcolonial policies that significantly constrained the social and economic rights of the minority Tamil population. Convinced that political avenues for redressing grievances were unlikely to yield meaningful results, some Tamils turned to violence. Domestic, regional, and international efforts to bring about a peaceful solution failed. A military strategy involving the extraordinary brutality of the Sri Lankan armed forces brought the civil war to a close. But Sumit Ganguly shows that few policy initiatives have been undertaken to address the underlying grievances that originally contributed to the outbreak of the conflict.

Two extremes are often used to address civil wars and weak states: costly and ill-designed interventions (Approach A) or minimalist approaches in which international actors either stay away or engage only to broker a deal or depose a dictator, failing to build institutions and consolidate peace afterward (Approach C). Clare Lockhart proposes an alternative: a sovereignty strategy (Approach B) in which core functions are sequentially established, tailored to the context, and delivered through partnerships between state, market, and civic actors. She analyzes the comparative costs and effectiveness of each of the three approaches.

Limited statehood is frequently depicted as a major cause for civil war and violent conflict, and thus state-building efforts are often considered an effective conflict-prevention tool. Thomas Risse and Eric Stollenwerk argue, however, that this assumption is misguided: in the past and present, areas of limited statehood have been the global default rather than the exception; limited statehood does not equal civil war and violence; and a too-narrow focus on state-building may foster ineffective or predatory state institutions. They suggest that external actors should contribute to governance-building, rather than state-building, focusing on service provision and rule-making institutions with a broader scope than the state.

While the EU has contributed to effective and democratic governance in the Western Balkans, Tanja A. Börzel and Sonja Grimm’s analysis shows that its effectiveness as an external good governance-builder varies due to structural postconflict conditions not conducive to democratization, conflicting policy objectives, the interplay between the EU and Western Balkan governments, and the involvement of domestic third-party actors in the reform process. To make EU good governance–building more effective, they recommend acknowledging conflicting objectives and using governance-building instruments consistently and credibly to reconceptualize external good governance–building as a dynamic process between external and domestic actors.

The Practicalities of Living with Failed States

The buffer zone has emerged as a key strategy to successfully manage the security challenges of several failed states in the Horn of Africa. Seyoum Mesfin and Abdeta Dribssa Beyene explore the practical aspects of power asymmetries between successful and failed states from the perspectives of two officials in successful states who deal directly with this security challenge within the constraints of current norms and practices of sovereignty. The situation in the Horn of Africa provides insights into the effects of failed states on the security of their neighbors and the challenges that failed states present to the wider international community.

Syria & the CNN Effect: What Role Does the Media Play in Policy-Making?

Lyse Doucet explores the role the media played in U.S. policy-making – the so-called CNN Effect – during Syria's crisis, which has unfolded during unprecedented flows of imagery on social media. President Trump launched air strikes previously avoided by President Obama after grisly images of poison gas attacks emerged on social media. But Trump’s limited action did not shift policy. Interviews with Obama’s senior advisors underline that the media do not drive strategy, but play a significant role influencing decision-makers to take action, which led to policy failures. Syria is a cautionary tale for both the press and policy-makers alike.

In Defense of Ambition: Building Peaceful & Inclusive Societies in a World on Fire

Fragility creates the conditions for violent intrastate conflict. But U.S. policy-makers have yet to arrive at a shared consciousness about the challenge of fragility, a shared understanding of the nature of the problem, or the types of capacities that can be deployed to address it. Nancy E. Lindborg and J. Joseph Hewitt describe recent advances in the development sector with regard to fragile states that suggest a way forward with stronger results. Despite the challenges of tackling fragility, recent progress and the urgency to alleviate human suffering tell us the time is right for greater ambition.

The post–Cold War international order has promoted a “standard treatment” for civil wars: the use of mediation to end conflicts and the deployment of peacekeeping forces, largely by the UN, to implement settlements. While effective in relatively permissive postconflict environments, these efforts have proved insufficient to resolve harder cases of civil war where governments refuse to cooperate or low-level violence is endemic. Richard Gowan and Stephen John Stedman suggest that growing major-power tensions could now undermine the post–Cold War regime for the treatment of civil wars, which, for all its faults, has made a significant contribution to international order.

UN engagement in recent civil wars has shown that the traditional principles of peacekeeping are ill-suited for these conflicts. Jean-Marie Guéhenno suggests that the UN focus on politics, using its comparative advantage – its independence – to win the confidence of the parties, while preserving its access to big powers to put pressure on them. However, the UN is challenged by growing divisions in the Security Council, the changing nature of conflict, and a crisis of states. Guéhenno suggests that the UN should not abandon its role in ending civil wars, but should recalibrate its ambitions and adapt its approach: be less state-centric and more inclusive; more robust militarily; and more disciplined in its priorities.

Drawing from the essays in the Fall 2017 and Winter 2018 issues of Dædalus, Stephen D. Krasner and Karl Eikenberry assess six security challenges posed by civil wars: transnational terrorism, pandemic diseases, refugee flows, regional destabilization, great-power conflict, and criminality. And they identify four policy considerations: 1) external actors and local elites rarely share a common future vision, thus ambitions should focus on establishing adequate or good enough governance; 2) irreconcilables can frustrate efforts to reach negotiated settlements and often require military victory or partition; 3) spoilers can deny success to the intervening powers; and 4) the ways and means available to intervening powers vary greatly in costs and appropriateness. Krasner and Eikenberry conclude that civil wars may become more prominent and their consequences more serious, but they do not rival the existential threat of nuclear-armed and near peer-state competitors.