One of the most famous episodes of the Constitutional Convention of 1787 centered around the design of the nation’s legislative branch. The Convention was split over two proposals. Under the Virginia Plan, put forth by delegates from the most populous state, the new nation would have two legislative chambers, with membership in each determined by the states’ proportion of the national population. This proposal drew resistance from delegates of smaller states who would have relatively less power in this structure of government. Under the smaller states’ preferred proposal, dubbed the New Jersey Plan, the United States would have a single legislature, with equal representation for every state, regardless of population.

The Convention reached an agreement in what came to be called the Connecticut Compromise, or the Great Compromise of 1787. The Compromise set up the legislative branch of the federal government as we know it today: an upper chamber with two representatives from each state and a lower chamber with representation based on each state’s population. Well, not their actual population. In the other major compromise to emerge from the Convention, enslaved people were counted as three-fifths of a person, enhancing the power of Southern states in the Electoral College and in the House. Under the same clause in the Constitution, “Indians not taxed” were also excluded from the count. White women, free African Americans, and children—like many non-land-owning white men—could not vote, but they were included in the population tally.3

The House of Representatives was designed to be the branch of government with the closest connection to the people. With the president elected by the Electoral College, senators elected by state legislatures (until the ratification of the Seventeenth Amendment in 1913), and Supreme Court justices appointed by the president, House representatives were the only lawmakers in Washington chosen directly by those few American white men who were eligible to vote. James Madison wrote with pride in The Federalist Papers that “the electors” of the House “are to be the great body of the people of the United States.”4

But how big should the House be? “Scarce any article, indeed, in the whole Constitution seems to be rendered more worthy of attention, by the weight of character and the apparent force of argument with which it has been assailed,” Madison wrote. This was a thorny question without an easy answer. He bemoaned: “No political problem is less susceptible of a precise solution than that which relates to the number most convenient for a representative legislature.”5 Ultimately, the Constitution stipulated that each representative should have roughly 30,000 constituents, with each state also guaranteed at least one representative. During the Constitutional Convention of 1787, some of the framers proposed larger districts. But George Washington, the president of the Convention who would be elected the nation’s first president two years later, disagreed. Washington’s insistence that House districts be kept small was the only time he participated in the discussion at the Convention.6

When the first U.S. Congress was called into session on March 4, 1789, it had fifty-nine members (six seats were added to the chamber over the course of its first year). Congress was directed to conduct reapportionment within three years and every ten years thereafter.7 These measures were explicitly designed to ensure the House grew as the nation’s population increased. “The unequivocal objects of these regulations,” Madison explained in Federalist No. 58, were “to readjust, from time to time, the apportionment of representatives to the number of inhabitants . . . [and] to augment the number of representatives.”8

In fact, had Madison got his way, the constituent-to-representative ratio would be written into the Constitution. The Bill of Rights—what we now know as the first ten amendments to the Constitution—originally included twelve amendments, the first of which set a formula for regular House expansion. As the average number of constituents per district increased, the House would add seats accordingly (Table 1).9

Per Madison’s writings in The Federalist Papers, such a ratio would ensure representatives had small enough districts that congressional delegates could remain attuned to the issues facing the American people. The amendment was ratified by eleven states but, as states continued to join the union, it remained one state short of adoption (because it was passed by the Senate without a deadline, it can still be ratified by any interested state, though none has done so since 1792). Under the terms of Madison’s proposal and based on the current population of the United States, if each House seat in 2021 averaged 50,000 constituents, the chamber today would boast roughly 6,500 seats. However, historian David Kyvig argues that Madison’s amendment in fact calls for a graduated formula, one that by 2010 would have raised the size of districts to 190,000 constituents, resulting in a House with 1,625 members.10

While the amendment did not pass, the House grew, albeit not nearly at the pace Madison wanted. Every ten years, Congress conducted the census, surveyed the results, and made two decisions: 1) how big the House should be for the next ten years and 2) what formula to use to apportion seats among the states. These formulas are important because, based on population calculations, states are invariably owed a fraction of a House seat. Formulas offer a seemingly objective measure of settling on fractions and adjudicating which states should receive the final seats. Of course, the decision as to which formula to use is highly political, and no formula can be truly objective. Congress has used five different formulas over its history. Since 1940, it has used the equal proportions method, also known as the Huntington-Hill method.11

The total size of the House was never relegated to a mathematical formula. The original ratio included in the Constitution of 30,000 constituents per representative was a minimum. The House expanded as the nation grew but surpassed Madison’s proposed ratio of 50,000 per representative by 1840 (Table 2). Two factors drove expansion through the early twentieth century: the addition of new states and the preservation of incumbent seats. Thirty-five states were admitted to the union between 1791 (Vermont) and 1912 (Arizona). In the first Congress with 435 seats (1913–1915), 268 House seats (62 percent) were apportioned to states admitted since 1791. 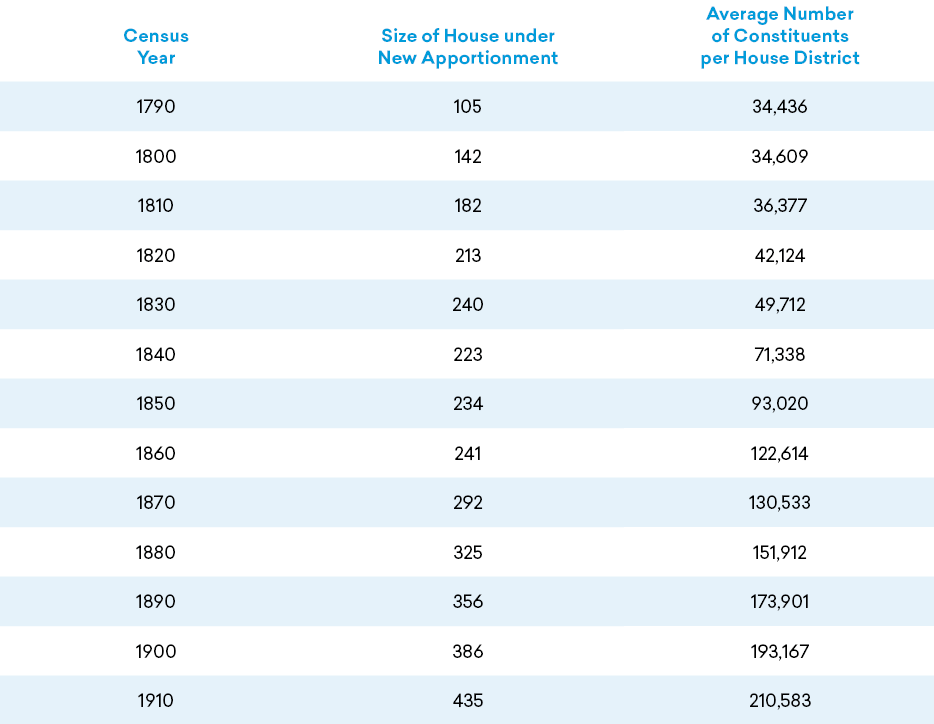 The other main driver of House expansion, particularly in the early twentieth century, was congressional action to ensure that no state lost a representative. In a highly subjective process, Congress surveyed the decennial census and assessed how many seats were slated to move between states. Instead of removing seats from any state, however, Congress expanded the chamber by exactly the number of seats that would have shifted from one state to another. States that merited bigger delegations received their new seats, and states slated to lose a seat kept the same number of representatives.12

Still, not every member of Congress favored the continued expansion of the House. Proposals to limit House size circulated in Washington as early as the nineteenth century. Congress passed a law in 1850 that implemented a new apportionment formula (known as the Hamilton/Vinton method) and limited the size of the House to 233. The new formula was adopted, but the size restriction was ignored.13

The issue of House size came to a head in the 1920s when parts of the nation were rapidly industrializing and urbanizing. At the same time, waves of immigration and a massive migration of African Americans from the South to the Northeast and upper Midwest threw the nation’s demographic balance into flux. Based on the 1920 census, reapportionment in 1921 would have shifted the balance of power in Congress: ten rural states were slated to lose a combined eleven seats, which would have gone instead to eight urbanizing states. This helped lead to the capping of the House and automatic apportionment to prevent congressional toying with House size.14

It is worth noting that a recent study from historian Dan Bouk disputes this standard narrative of the capping of the House. The rural-urban split was, per Bouk, a “statistical illusion,” and rural and urban representatives did not vote significantly differently when it came to apportionment. Bouk challenges the influence of other factors, too, including questions about the veracity of the census and supposedly crippling academic debates over apportionment formulas.15

Regardless of the particular importance of the 1920 census, members of Congress were starting to believe that the body was growing too large, was too expensive to operate, and was running out of physical space to accommodate additional members. As Bouk and others have shown, the efficiency of Congress as an institution had become a major concern. In 1921, New York Representative Isaac Siegel proposed the expansion of the House to 483 seats, a size that, per previous apportionments, would ensure no state lost representation. Siegel encountered a new intensity of resistance, especially from his fellow Republicans. He tried to compromise, but failed. In the 1923 apportionment, Congress kept the House at 435 seats; the first time since 1843 and the second time in its history, it did not expand after a census. In 1929, Congress passed the Permanent Apportionment Act, which locked the size of the chamber at 435.

Other than a brief interlude from 1959 to 1962—when two seats were temporarily added after Hawaii and Alaska received statehood—the House has remained at 435 seats since it landed there in 1913. Four hundred and thirty-five has become, in Bouk’s words, a “nearly sacred number.”16 Yet it is a number that originates not with the founders, The Federalist Papers, the Constitution, or any legislative doctrine. It represents the number of seats the House happened to have when members decided they were tired of expansion. It is out of whack with the founders’ vision, and it is long overdue for a change.