As James Madison well knew, there is no perfect House size. However, to help restore the connection between voters and representatives and to address the other challenges of representation outlined above, the nation needs a larger chamber than it has today.

Since the capping of the House in 1929, when seats have been reapportioned, any state’s gain has meant another’s loss. And as states lose seats, their ratio of constituents per representative grows higher and the distance between voters and congresspeople grows accordingly. Under the 2010 apportionment, for example, West Virginia had three congressional seats, each with roughly 620,000 constituents. After losing a seat in the 2020 apportionment, each of the state’s two remaining congresspeople represents 897,000 constituents, a 45 percent increase in the number of people represented by these offices.

It has become increasingly common for states to lose seats and voters to lose representation. In the ten apportionments between 1930 and 2020, there were twice as many instances of a state losing at least one congressional seat as there were in the thirteen apportionments between 1790 and 1910. Over the last ninety years, in 86 percent of cases when a state lost at least one seat, it did so even when its population stayed flat or increased. 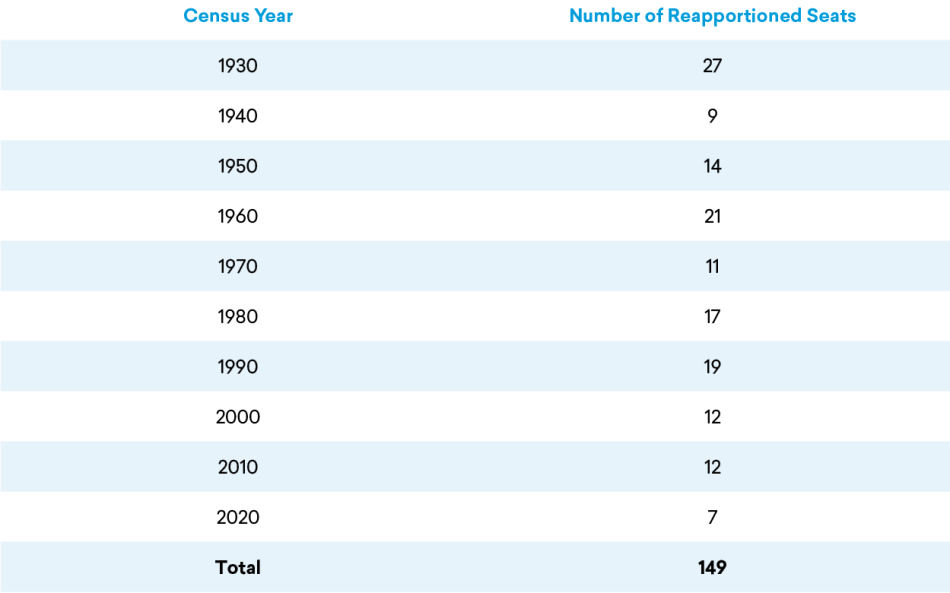 In total, 149 seats have shifted between states since 1931. The addition of 149 seats to the House would yield a chamber with 584 seats. Unlike the Senate, the Constitution does not lay out a mechanism for breaking ties in the House. In today’s era of hyperpolarization and party-line votes, the House should be kept at an odd number to prevent the controversy that might surround a split vote. As a result, we recommend the addition of 150 seats.

The expansion of the House by 150 seats would help restore the representation that has been lost over the last ninety years. To be clear, these seats should not be returned specifically to the states that have lost congressional districts. Instead, the House should be expanded to 585 seats (435 + 149 +1) and apportioned under the usual method. This increase would result in an average of 566,000 constituents per district, a 26 percent reduction from the current average ratio of 761,000 constituents per district. This is slightly smaller than the average district size that followed the 1993 reapportionment.

Going forward, the House should continue to expand as the population grows. Specifically, Congress should endeavor to increase by the number of seats necessary to ensure that no state loses a representative, as used to be the norm (while also adding additional seats as needed to ensure that the House has an odd number of total seats). This number is not the same as the number of seats that shifted between states. After each state receives its standard apportionment of a single seat, remaining seats would be divvied-up using a population-based formula. All this is to say, the seven states that lost a seat in 2020 would not be the first seven states to gain under House expansion. As a result, the House would need to add more than seven seats to ensure no state lost representation. In 2020, West Virginia was nineteenth in line for another seat, so preserving its third seat would mean the addition of 19 total seats to the House. This expansion also entails new seats for states not slated to lose a representative.44

A potential drawback of this proposal is that, over time, the House might expand too quickly, leading to another arbitrary cap. To mitigate this issue, Congress could set a maximum number of seats to be added each cycle (but no fewer than ten, for example). Additionally, Congress could set certain benchmarks that states would have to meet to preserve their current levels of representation. One guideline could be that if a state loses population over two consecutive cycles, then it could, in fact, lose a seat. For example, West Virginia’s population declined between the 2010 and 2020 apportionments. If it declined again between 2020 and 2030, the House would not be obligated to add sufficient seats to ensure West Virginia preserved its delegation size.

Any proposal for expansion will include trade-offs. But Americans, especially those who live in states with growing populations, should not periodically lose representation in Washington. Our plan for House expansion represents an enlargement of Congress that would make a significant improvement to the chamber’s ability to represent the American people, is politically feasible, and is rooted in the House’s tradition as the People’s House.