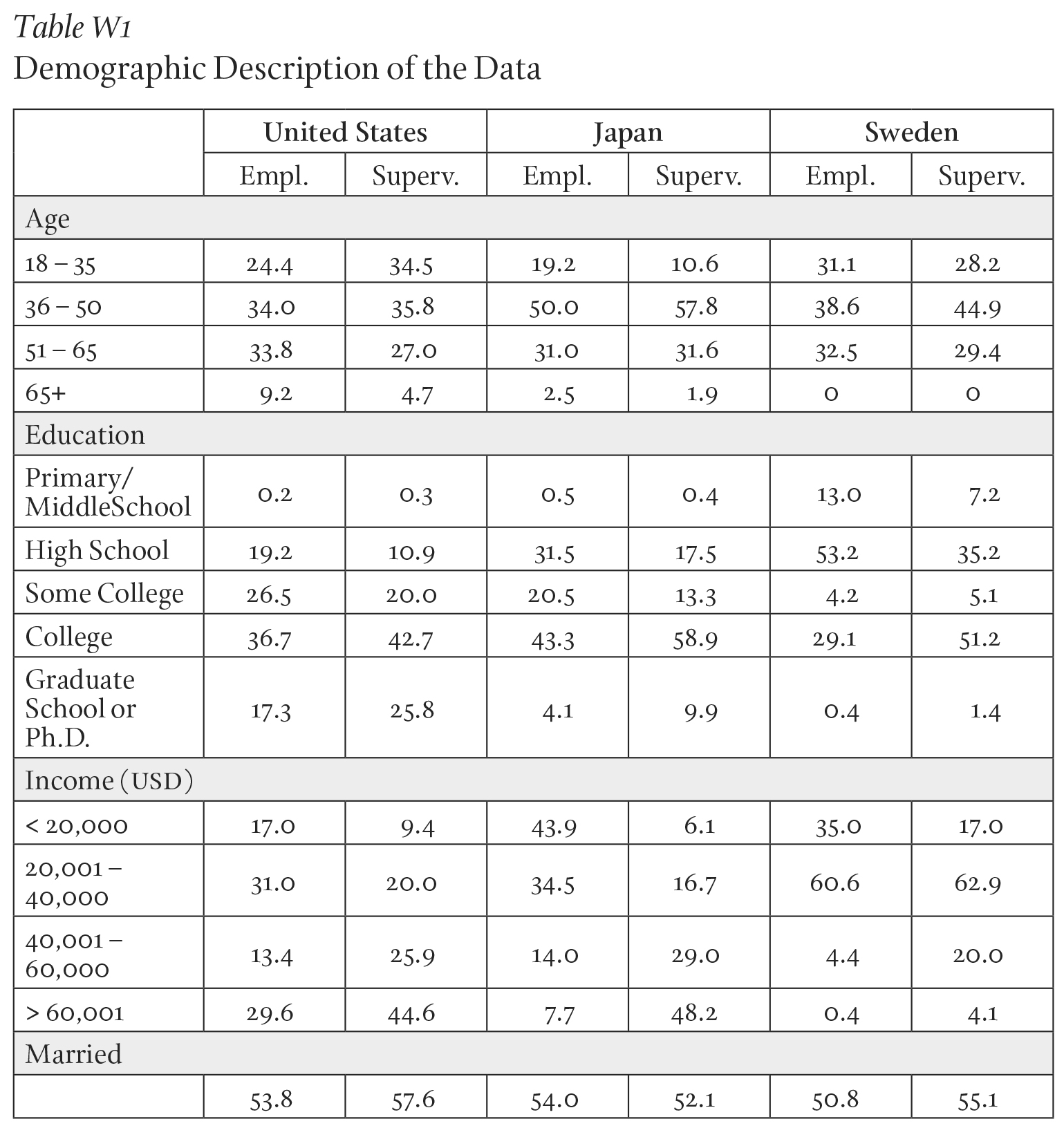 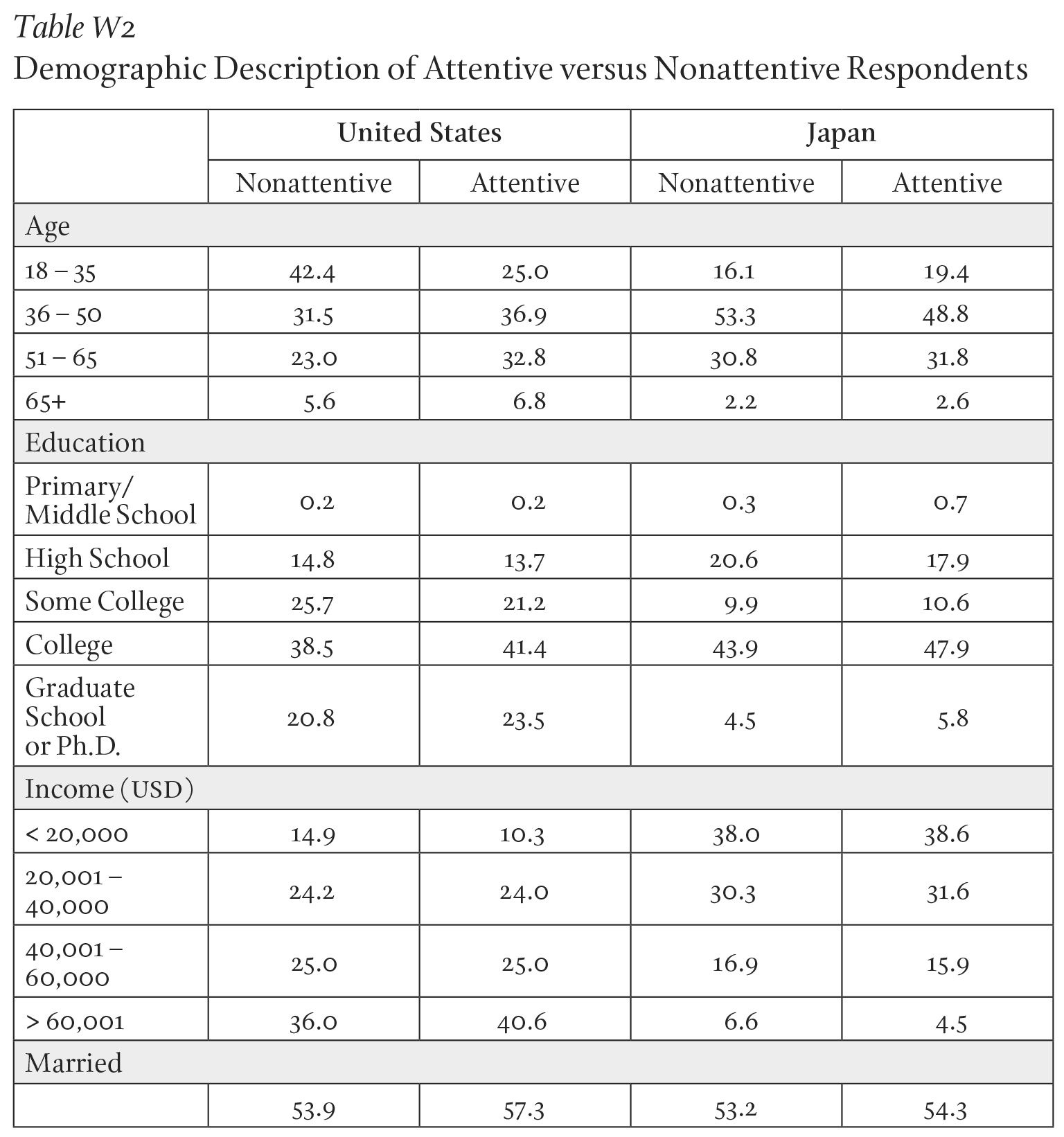 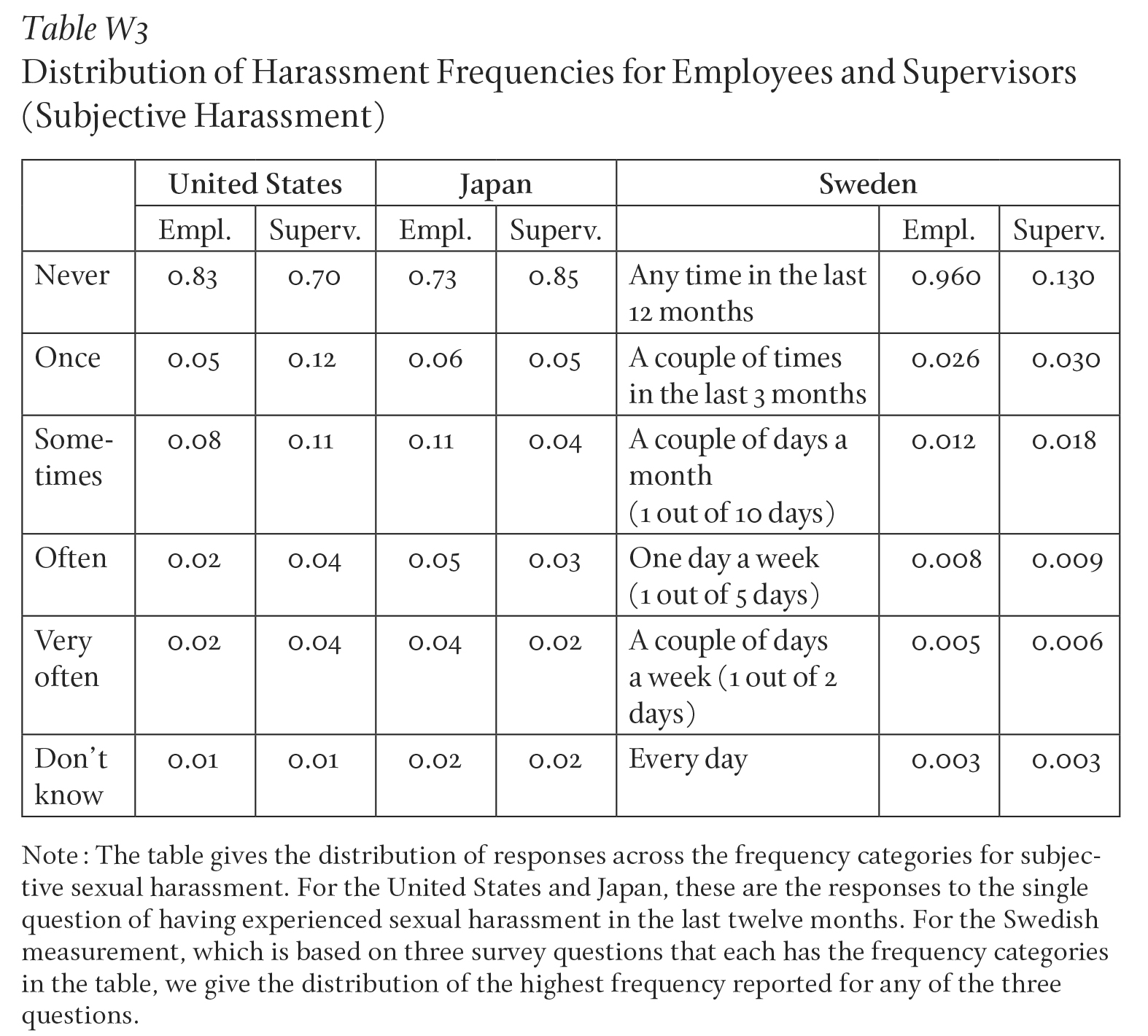 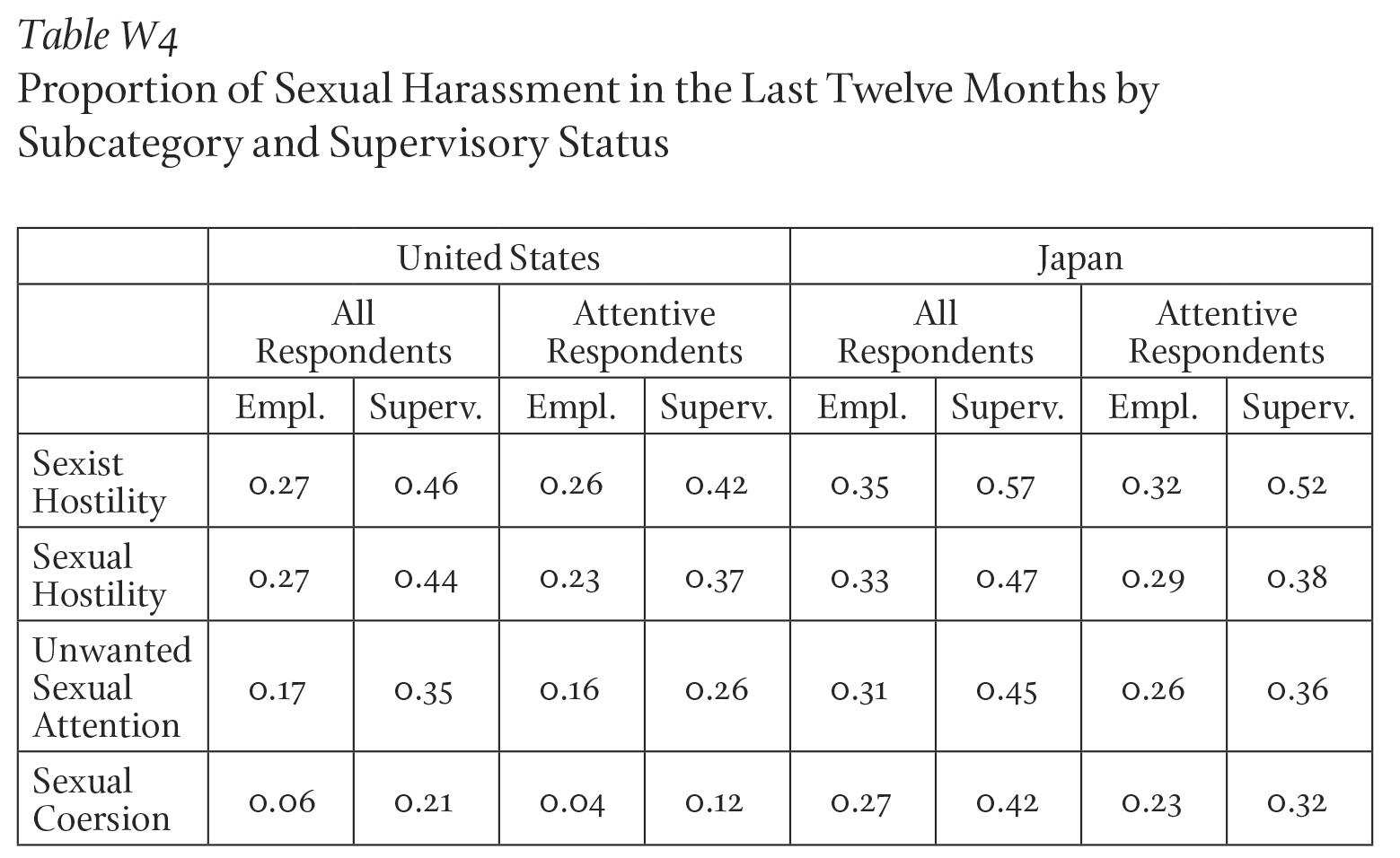 In both our Japanese and U.S. surveys, we conducted a conjoint experiment to study if supervisory status of the victim of sexual harassment is a consideration that drives collegial advice to report the incident at the workplace. This method allows us to isolate the impact of women’s supervisory status on the recommendation response. Female supervisors differ from nonsupervisors not only by observable traits such as age or education, but also in the form of the types of sexual harassment they are exposed to, and the work environment this harassment occurs in. By relying on the conjoint, we can hold all factors constant and examine how the advice to report depends on the victim holding a supervisory position or not.

Each respondent was presented with a pair of two hypothetical scenarios in which a woman experienced sexual harassment. A table of attributes for each of the scenarios showed a summary of the situation. The attributes for each scenario, which appeared in a randomized order in the table, were age (25, 35, 45, and 55), the women’s position (employee or supervisor), her contract type (part-time or permanent (or salaried employment in the US), her education level (tertiary education or high school education), and the offender’s position (manager or colleague). We also include women’s race (White, Black, Hispanic or Asian) in the US analysis. Please note that for presentation purposes, we dropped two other attributes: type and frequency of sexual harassment. The results show that both attributes are highly relevant to respondents’ considerations in an expected way. For example, more serious type of sexual harassment that happen more frequently tend to result in advising to seek assistance. In the following analysis, we choose the first value within each attribute as a reference category. This means that we can see how changing the value relative to the reference category increases or decreases a probability of affecting the advice to report.

We estimate the average marginal component effect (AMCE) of a change in values of the attributes on the likelihood that the respondent chooses to advise the woman to seek organizational assistance for the sexual harassment.1 Under the conditional independent randomization of attribute values, the AMCE can be estimated using a linear regression model. We regress the dependent variable on a set of dummy variables corresponding to each value. As suggested above, the coefficient for each variable can be interpreted as the average change in the probability that a respondent will choose the scenario when it includes the value relative to the baseline value. We report standard errors for these estimates clustered by respondents to account for within-respondent correlations in responses. The results below use only attentive respondents. 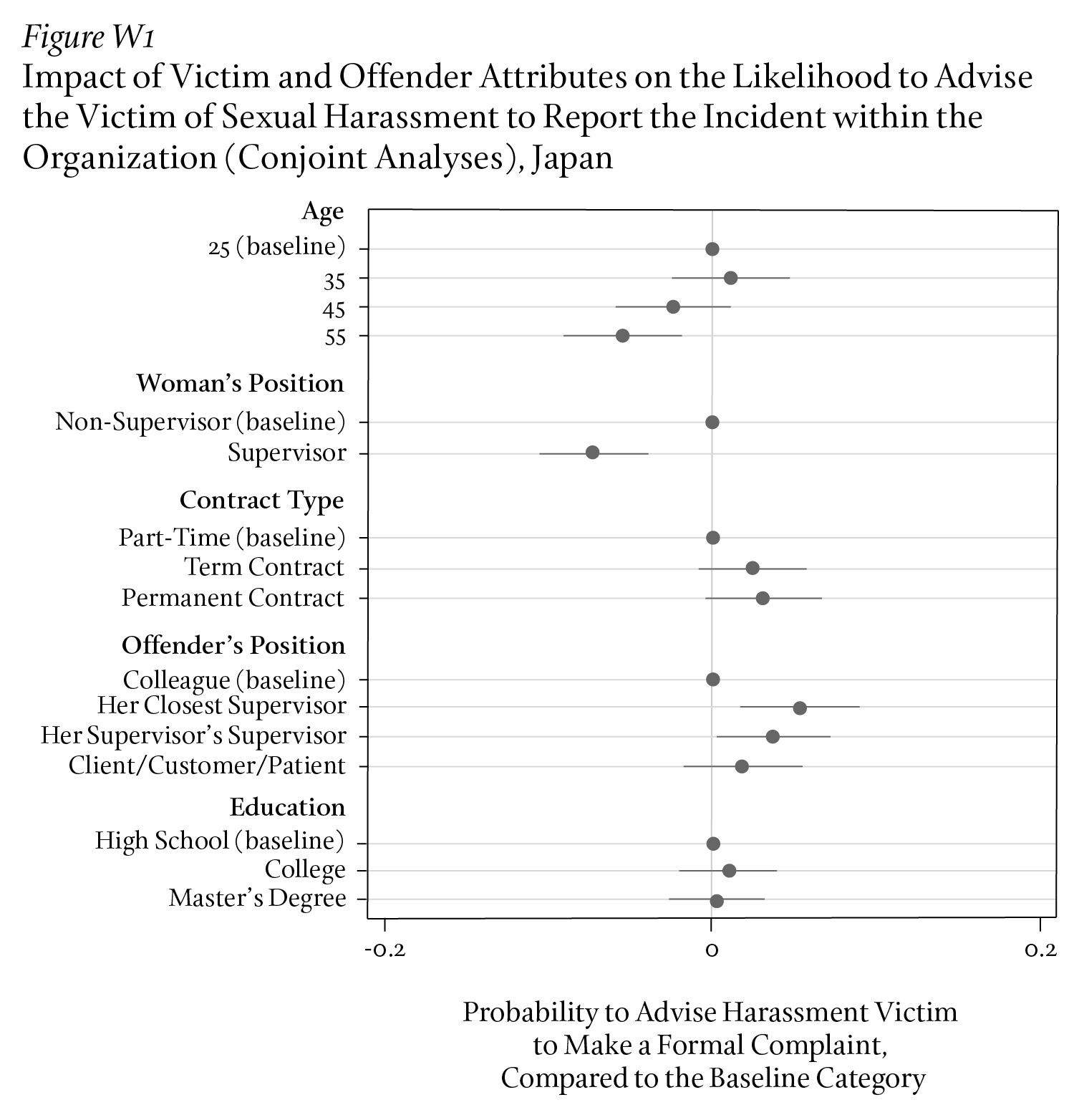 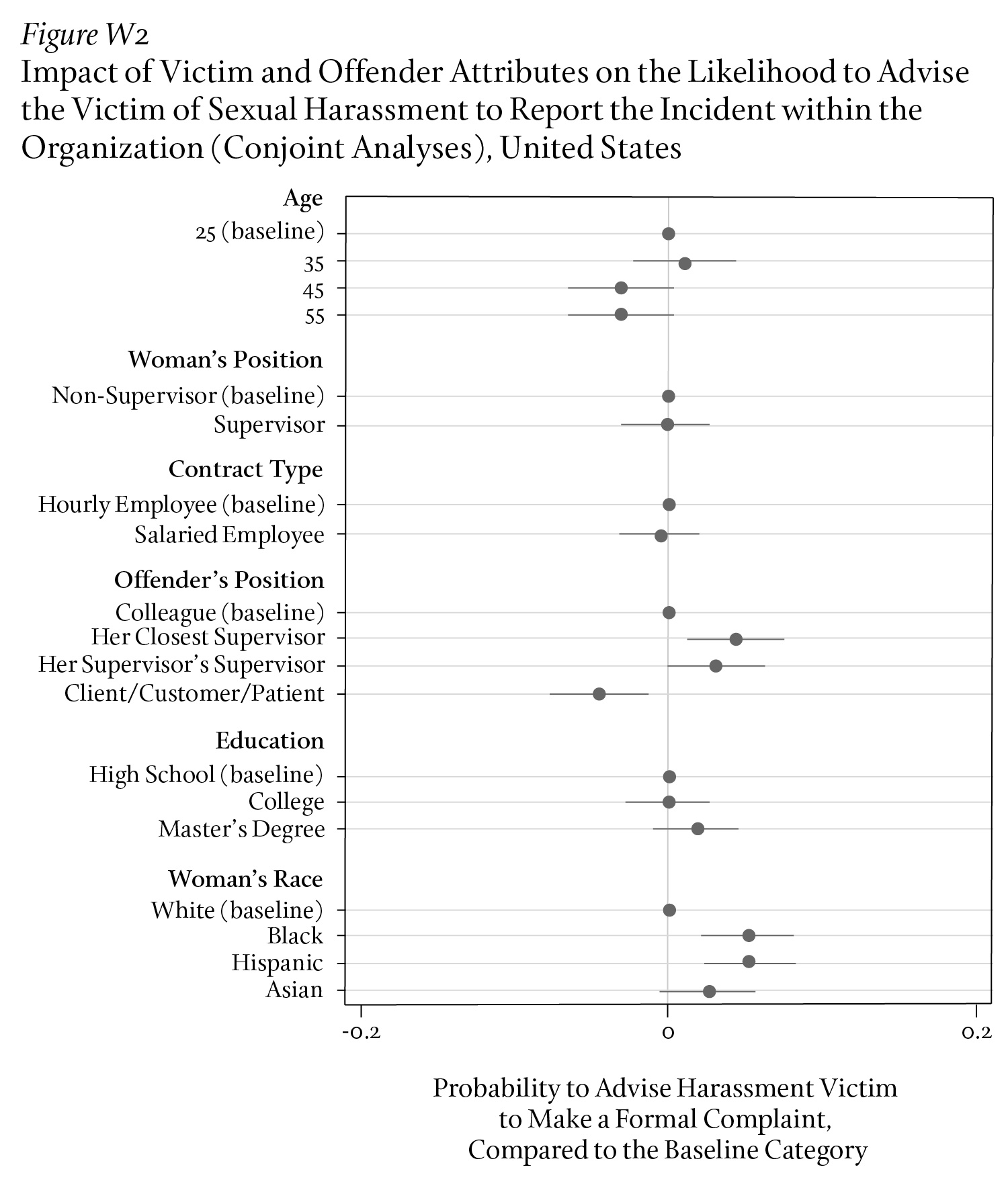 Figure W1 finds that when holding a supervisor position, Japanese respondents are 7.2 percentage points (standard error of 0.02) less likely to advise her to seek organizational assistance, and this is statistically significant at the 1 percent level. For the United States, on the other hand, Figure W2 shows a point estimate close to zero, with no statistically significant difference between women with and without supervisor status.