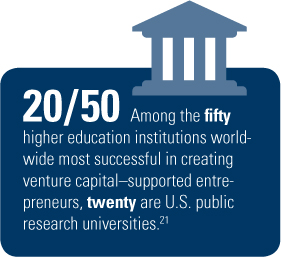 In the previous section, we encouraged public research universities to look to state governments and the philanthropic community for sustaining support, including funding for core educational programs. There are compelling reasons why both groups should commit significant resources to these institutions. But we also understand that public higher education is only one of many interests competing for limited revenue. To do more than preserve the status quo, to evolve and expand to meet future public needs, public research universities will need to look beyond the states—and especially toward the business community—to find new partners. Fortunately, there is reason to believe that the private sector is willing to work with public research universities. 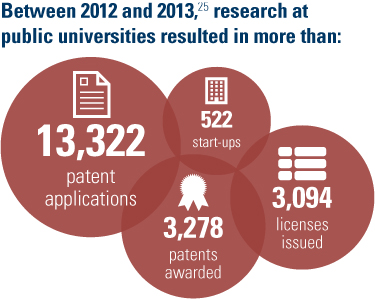 These are positive signs, and reason to believe that public-private partnerships can help bring public research universities into a new technological age. Decades of accumulated policies and practices, however, have created barriers to a more seamless public-private compact. For example, negotiations over the licensing of university-derived technology are often so complicated and tedious that they overtax university laboratories, create unnecessary expenses, and discourage fast-paced companies from pursuing partnerships in the first place. In effect, the business community gives up its access to university talent and expertise while public research universities relinquish their claims to corporate support, as well as potential internships and employment opportunities for their graduates.

The first step toward a greater public-private compact, therefore, is to simplify the terms of exchange between public research universities and business. For example, public research universities could promote the use of standard master agreements to simplify the prohibitively complex licensing negotiations that are so common today, accelerating the transfer of scientific, technological, and humanistic research for commercial development.27 Some universities have already started to employ standard master agreements that allow many businesses to work directly with university laboratories. Many other public research universities should test this approach—perhaps forgoing some licensing revenue—in the hope that a more open and flexible approach will encourage more explorations and yield more innovations. It may even help encourage a more loyal and generous alumni community over the long term, as imaginative students begin to see their universities as a help rather than a hindrance to the process of bringing discoveries to market.28

Simplifying the licensing process will undoubtedly make universities more attractive partners. However, such procedural changes should also be accompanied by a cultural shift. Both business and public research universities need to acknowledge the great potential of properly mediated partnerships, and universities, in particular, must actively signal to businesses that they are willing partners. They could send representatives to major industry conferences where business leaders are already thinking about business partnerships, such as the J.P. Morgan Healthcare Conference or the Bloomberg Future of Energy Summit. Such overtures could be an important first step in building transformative relationships and could become a regular feature of the marketing and development strategies of all public research universities. They might also consider more radical approaches to facilitate new partnerships, including the establishment of dedicated research funds, developed through philanthropic and corporate giving, that would provide stable sources of support for new research and development. Incubator funds could be distributed to ambitious faculty eager to carry their ideas through to market, in exchange for equity in those ideas. Such seed funding could come from a dedicated pool of resources that would grow through contributions from alumni and, perhaps, industry partners interested in collaboration.

Technology transfer is not the only benefit of improved relations between public research universities and the business community. The private sector can also partner with universities to create well-paying internship programs, offering new opportunities for students to finance their educations and to learn skills that will be immediately useful after graduation. For example, the Raytheon–UMass Lowell Research Institute, which launched in October 2014 on the Lowell campus, provides opportunities for UMass Lowell faculty and students to collaborate with Raytheon Company employees on research projects, while increasing both organizations’ eligibility for federal research funding.39 At the University of Michigan, the Dow Sustainability Fellows Program—made possible by the Dow Chemical Company—supports full-time masters students, doctoral students, and postdoctoral fellows across a broad range of disciplines, providing $20,000 toward each Dow Sustainability Fellow’s studies to find solutions to complex issues in sustainability. Since it began in 2012, the program has invested $4.2 million to support 340 students from over a dozen different disciplines.40 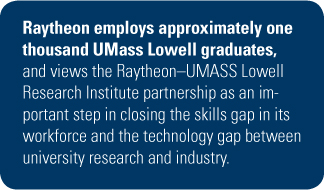 Corporations might also consider more-direct forms of support, particularly in areas that align their interests with those of public research universities, including by providing scholarship funds to universities that educate valued new employees. The most effective strategies to advance this goal openly acknowledge the importance of public research universities to corporate success. For example, when a corporation uses a search firm to identify new talent, it customarily pays the firm roughly one-third of a new hire’s starting salary. Corporations might consider replicating this model as they hire college graduates: they could contribute one-third of a graduate’s first-year salary for each graduate they hire—whether the new hires are citizens or eligible participants in an H-1B visa program. Such contributions would be tax deductible and, more important, would acknowledge and help sustain the educational institutions upon which corporations have come to depend.

The federal government can also play an important role in encouraging new public-private partnerships. This idea is elaborated on in the American Academy of Arts & Sciences report Restoring the Foundation: The Vital Role of Research in Preserving the American Dream (2014).41 The report calls for the federal government to help universities pursue research partnerships with industry, highlighting the many rewards of bringing the two sectors closer together: faster technology transfer, greater knowledge transfer between faculty researchers and private sector employees, more opportunities for students to gain important private sector experience, and a new source of funding for novel research pursuits. Public research universities are a critical component of this research ecosystem, connecting faculty researchers and their intellectual capital with the private sector. As such, public research universities require and deserve federal attention as well as state support.

More generally, public research universities connect American citizens to one another and to new ideas: as centers of scholarly discussion, artistic and cultural exchange, civil debate, and scientific exploration. In recent years, Congress and the executive branch have explored ideas for funding the restoration of the nation’s physical infrastructure, including plans to incentivize the return of corporate earnings from abroad. Lawmakers have contemplated a modest tax on returned earnings to create a new fund for infrastructure projects. As these conversations continue and evolve, policy-makers should broaden their understanding of infrastructure to include our intellectual infrastructure, which is no less important to the nation’s future than our roads and bridges. For example, U.S.-based multinational corporations generate income from an estimated $2.1 trillion invested outside the United States.42 A one-time repatriation of 1 percent of this amount, set aside for the nation’s intellectual infrastructure, could generate tens of billions of dollars for higher education—a transformational sum for public research universities across the country.

28 According to Stanford University Office of Technology Licensing, Risky Business: Office of Technology Licensing Annual Report (Stanford, Calif.: Stanford University, 2014), the use of master agreements, flexible partnerships, and investments in good relationships over the long term has fostered a sense of goodwill and encouraged Stanford’s partners to continue to do business with the university in the future.

35 Nick Holonyak, Jr., a John Bardeen Endowed Chair Emeritus in Electrical and Computer Engineering and Physics at the University of Illinois at Urbana–Champaign, was a contributor to the first practical quantum-well laser, which enabled modern fiber optics communication. Mosaic, an early web browser credited with popularizing the World Wide Web across the globe, was developed at the National Center for Supercomputing Applications at the University of Illinois Urbana–Champaign.

36 Association of American Universities, Riding the Wave of Federal Investment.

37 U.S. Social Security Administration, “Agency History—Research Note #8: The Special Role of the University of Wisconsin in the History of Social Security,” https://www.ssa.gov/history/wiscrole.html.

38 Jonathan R. Cole, The Great American University: Its Rise to Preeminence, Its Indispensable National Role, Why It Must Be Protected (New York: Public Affairs, 2009), 205.