Online
Back to events 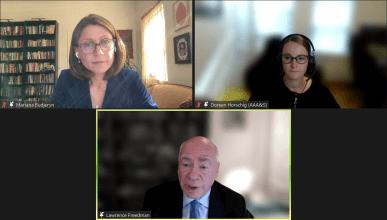 The event offered up-to-date analysis on the Russia-Ukraine War with a focus on the role of nuclear strategy and deterrence since the beginning of the war and its implications for nuclear arms control and nonproliferation.

As has become clear, Moscow underestimated Ukrainian resistance and unity of command. Ukraine has exhibited a well-developed defined strategy, high quality military leadership, good morale among its soldiers, contributions from across the Ukrainian populace, and international support that has exerted economic and political pressure on Russian leadership. As a result, the world now has a major nuclear power finding itself vulnerable in an interstate conflict with a non-nuclear state. Recent developments, including Russian annexation of four Ukrainian regions and President Vladimir V. Putin’s threatening rhetoric, have given rise to discussions about how the conflict could turn nuclear.

There is, however, a danger of getting fixated on the risk of nuclear use. The speakers emphasized the need to recognize non-nuclear dangers and consequences, including Russia's attempt to conquer areas of Ukraine, its attack on the values of NATO and the “decadent West”, and persistent attacks on Ukrainian people and places. This war has already seen terrible death and destruction. Even without the use of a nuclear weapon, cities have been bombed and destroyed, civilians have been tortured and murdered.

Within the analysis of the implications for nuclear arms and nonproliferation, the speakers noted that nuclear deterrence and restraint have been evident thus far. First, Western forces have not agreed to Ukrainian President Volodymyr Zelensky’s proposal for a no-fly zone, fearing direct engagement in the war. Second, Russia has not attacked NATO countries. However, the Russia-Ukraine war also shows the limitations of nuclear deterrence, non-proliferation, and arms control as Ukraine demonstrates the negative effect on a country without nuclear capabilities.

The credibility of the global nonproliferation regime has been damaged by the Russia-Ukraine War. While tensions in the global nuclear order are not new, challenges are exacerbated when there is a standoff between the nuclear haves and have nots, which highlights issues raised by the 2017 Treaty on the Prohibition of Nuclear Weapons which would delegitimize nuclear weapons altogether.

A policy challenge for the international community is to identify ways to reduce the dangers of nuclear weapons use and reinvigorate a security dialogue to lessen the likelihood of future conflict between nuclear and non-nuclear powers. While the prospects for nonproliferation and nuclear arms control appear daunting, history has shown that crises can also be an opportunity to highlight the importance of measures to limit old nuclear arsenals and prevent new ones.

Through Track-2 meetings between U.S., Russian, and Chinese experts, Promoting Dialogue on Arms Control and Disarmament seeks to identify a range of measures to enhance strategic stability among the major nuclear powers and avoid costly arms races.