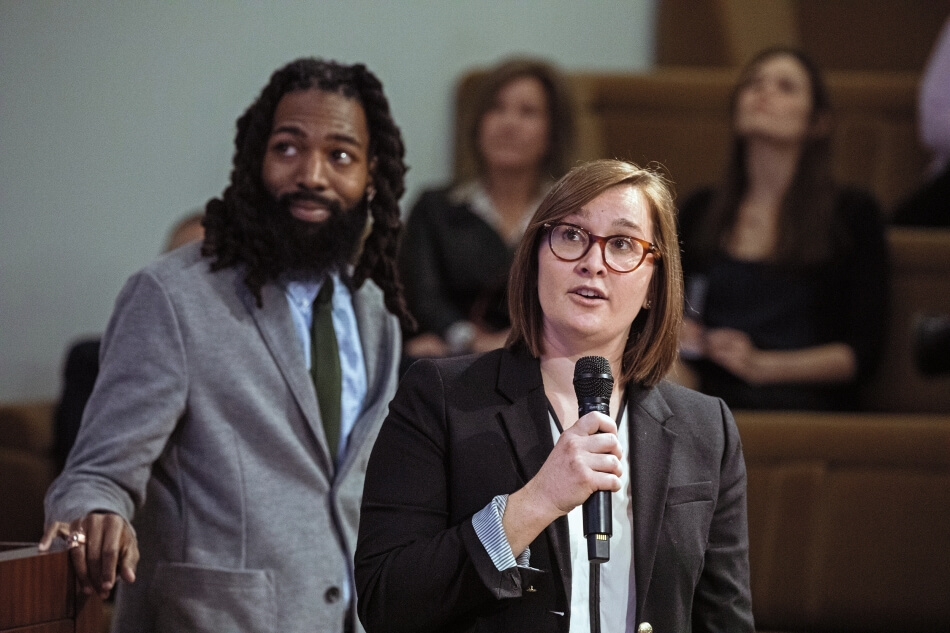 In early February, the Academy welcomed Americans from around the nation for a day-long convening on the practice of democratic citizenship. The event was a culmination of the extensive grassroots outreach and listening sessions that have been a hallmark of the work of the Academy’s Commission on the Practice of Democratic Citizenship.

Led by co-chairs Danielle Allen of Harvard University, Stephen Heintz of the Rockefeller Brothers Fund, and Eric Liu of Citizens University, the Commission was formed in 2018 and includes thirty-five scholars, practitioners, former elected officials, members of the media, business leaders, and philanthropists. The Commission’s diverse membership extends across ideological lines: a fundamental premise of the Commission’s work is that reinventing democracy cannot be a partisan project.

To ensure its work reflects people’s everyday experiences and engagement with democracy, the Commission held nearly fifty listening sessions across the country, connecting with hundreds of Americans, in large cities and small towns from coast to coast. The Commissioners wanted to hear from people in local communities: What, in their opinions, is wrong with the way our system is working? What could be better? How are individuals and organizations across the country working to make it better? The Commission spoke with a diverse cohort of Americans, such as grassroots organizers, activists, business leaders, refugees and immigrants, elected officials, college students, community and faith leaders, Americans with disabilities, and educators. The individuals who participated in these listening sessions represented a wide range of demographic, economic, and geographic groups.

These conversations not only shaped the Commission’s forthcoming final report and recommendations, but they also created a network of people who are engaged with and are working in their communities. This effort was the first of its kind in Academy history. The Commission heard from individuals whose inspirational and innovative work on the ground is strengthening their cities and neighborhoods. From conservative thought leaders in Mississippi to Cambodian refugees in Massachusetts, the Commission learned about the challenges and opportunities that Americans face as participants in our democracy, as well as the fears and aspirations they have as they think about its future.

As co-chair Stephen Heintz noted, “Americans are profoundly disappointed with the state of our democracy, not because they reject its basic ideals, but rather because they cherish them–and can see clearly that we have fallen short. I found it impossible to experience the engagement sessions and not to be powerfully inspired. The voices, stories, priorities, and suggestions of the American people are at the heart of the Commission’s work.”

On February 7, the Academy hosted more than seventy participants of these listening session as well as Commission members, civic leaders, and philanthropists. They came together at the Academy’s headquarters in Cambridge to hear from one another, share their work, and get a preview of the Commission’s final recommendations.

Amanda Gorman, the inaugural youth poet laureate of the United States, opened the day’s events with a reading of a poem she composed in celebration of Independence Day, entitled “Believers Hymn for the Republic.” She described the challenge of writing that poem and her concern that her words would celebrate the Founding Fathers without also recognizing their humanity and faults. Ultimately, she said her approach reflects that of the Commission and of the participants who were gathered in the room. “I decided,” she said, “I would take that as my own duty and pay that forward–to continue the mission. To not look at American democracy as something that is broken, but to look at it as something that’s unfinished. And, I think that’s something this convening represents. We all here know that there’s work to do.”

The program also featured three plenary panels that focused on the following topics: 1) inspiring a commitment to American democracy and each other; 2) empowering voters; and 3) expanding civic infrastructure to create bridges across lines of difference in communities. In a panel moderated by Commission co-chair Eric Liu, Mina Layba, Legislative Affairs Manager for the City of Thousand Oaks, discussed the impact of a mass shooting and wildfires on civic engagement in a California community. Cameron Patterson, Director of the Moton Museum, told the story of the Moton School’s role in the civil rights movement and the importance of the museum as a place of celebration and healing in Farmville, Virginia. Serene Jones, President of Union Theological Seminary, shared the challenges confronting faith leaders in a hyperpartisan and polarized environment. And John Wood, Jr. of Better Angels discussed his work and his experience as a conservative Republican living in the Los Angeles area.

Vanessa Grossl, a participant from Lexington, Kentucky, who in her presentation had described the community impact and process of removing Confederate statues from the city’s public square, noted after the event, “This work, combining the bright minds and experiences of the Commission members and their networks with best practices from around the country, gives me high hope for the future of not only our nation but its role in leading the citizens of the world toward a brighter path forward.”

Video of the day’s panels and performances are available to view on the Academy’s website.

Nearly 250 years ago, the nation’s founders came together to build a functioning democracy. But today, the U.S. population has grown exponentially to nearly 330 million people, distributed over an area nearly nine times larger than the thirteen original colonies. The nation is more diverse and larger than ever. Given these immense changes, how can we make a system that was created almost 250 years ago still work? The Commission on the Practice of Democratic Citizenship was created to answer this question.

Focused on the impact of political institutions, political culture, and civil society, the Commission’s work explores the factors that encourage and discourage people from becoming engaged in their communities; sheds light on the mechanisms that help people connect across demographic and ideological boundaries and identifies the spaces that promote such interaction; examines how the transformations in our media environment have altered what civic engagement looks like in many communities; and makes recommendations that will encourage participation and empower citizens. In summer 2020, the Commission will release its final report and recommendations that focus on each of these areas.

For more on the Commission on the Practice of Democratic Citizenship, please visit www.amacad.org/project/practice-democratic-citizenship.