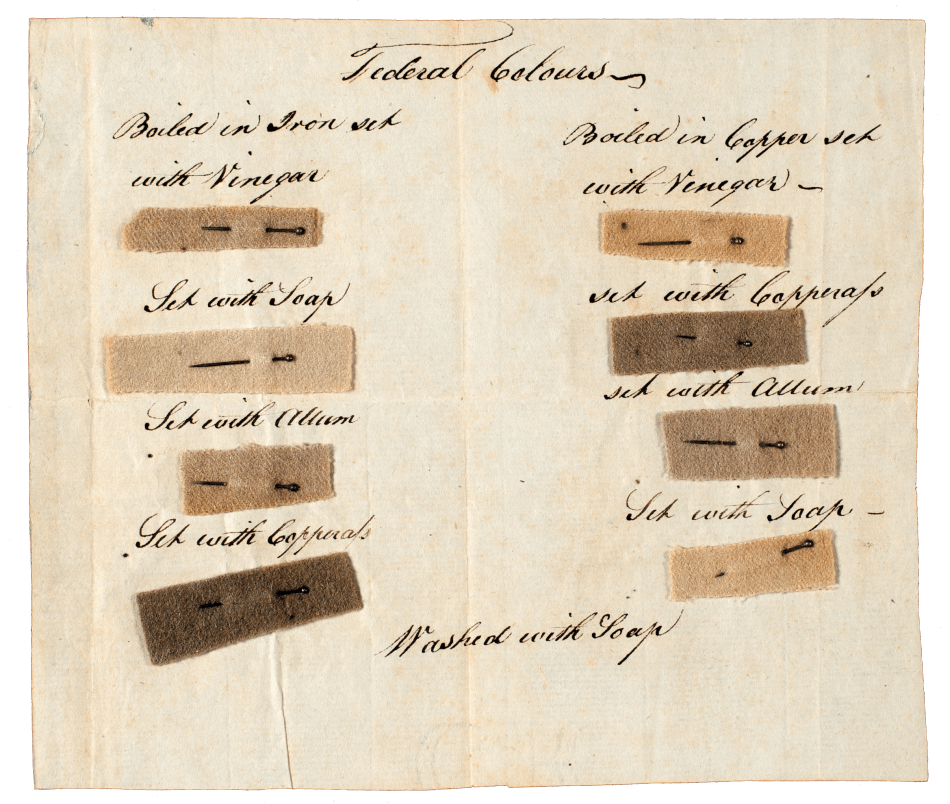 On February 26, 1781, the Academy published in the Independent Ledger a call for communications: “in promoting the Cause of useful Knowledge, they request the Assistance of the Ingenious in every profession.” Many individuals responded, contributing to discussions within the Academy on such matters as manufacturing, agriculture, and medicine.

Reverend Samuel Haven (1727–1806) of Portsmouth, New Hampshire, was one such contributor. With his working knowledge of chemistry, he manufactured saltpeter during the Revolutionary War and experimented with dyeing techniques. In June 1789, he renewed an exchange with Academy Fellow Manasseh Cutler regarding his experiments that produced the “Federal Colours,” which Cutler later forwarded to the Academy. The sample swatches, likely originally blue in color, were boiled in both iron and copper kettles and set with four different fixatives: vinegar, soap, allum, and copperas [hydrated ferrous sulfate].

I have made some further enquiry concerning the colouring corn I spake [sic] to you about. I wish I could have obtained some sooner – but it was out of my power – and even now tho’ I have sent you only seven kernels, they are half I could obtain, so high are they in demand. I have likewise sent you some small shreds as patterns of the Colours said corn will dye. I wish they had been larger, but they are the largest I could get – the kernels of sd corn, the leaves, & the stalk & cobb are all serviceable in dying [sic] – but the stalk is the best. The Colours may be altered by adding a greater quantity of what is to set the dye – I presume you will plant the few kernels I have sent you for [experiment] & in rich ground –

I think this discovery may be of public utility to us in the Infancy of our Manufacturies [sic] – should any others come to my knowledge, I shall do my self the honour to communicate them to you – and if you think this worth the attention of that Honorable Society of which you are an important member be so kind as to mention it in my Name & with high Esteem & respect, to that patriotic Society. . . .”