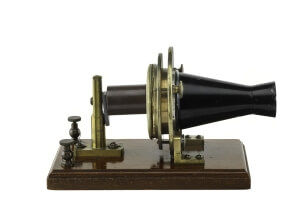 Alexander Graham Bell visited the Academy and demonstrated his invention of the telephone before members twice during 1876 in May and October. The May demonstration was the first public demonstration of any kind of the telephone. This demonstration only included music, not human speech, and transmitted only one way. However in examination of the phone afterwards, it is recorded that fellows spoke through the line. At each meeting, a paper authored by Bell was presented. The first paper was presented by the Corresponding Secretary and in October, by Bell himself. Bell would later be elected to the Academy on March 14, 1877.

On May 10, 1876, the Academy’s Corresponding Secretary, Josiah Parsons Cooke, presented a paper by Alexander Graham Bell “On Telegraphing Musical Sounds,” later published in the Academy’s Proceedings as “Researches in Telephony.” In the paper, Bell described past work in the field and explained his recent experiments in transmitting both pure musical tones and human speech.

There, Bell describes his experiments with a telephone as follows:

“Upon singing into the telephone, the tones of the voice were reproduced by the instrument in the distant room. When two persons sang simultaneously into the instrument, two notes were emitted simultaneously by the telephone in the other house. A friend was sent into the adjoining building to note the effect produced by articulate speech. I placed the membrane of the telephone near my mouth, and uttered the sentence, ‘Do you understand what I say?’ Presently an answer was returned through the instrument in my hand. Articulate words proceeded from the clock-spring attached to the membrane, and I heard the sentence: ‘Yes; I understand you perfectly.’ The articulation was somewhat muffled and indistinct, although in this case it was intelligible. Familiar quotations, such as, ‘To be, or not to be; that is the question.’ ‘A horse, a horse, my kingdom for a horse.’ ‘What hath God wrought,’ &c, were generally understood after a few repetitions. The effects were not sufficiently distinct to admit of sustained conversation through the wire. Indeed, as a general rule, the articulation was unintelligible, excepting when familiar sentences were employed. Occasionally, however, a sentence would come out with such startling distinctness as to render it difficult to believe that the speaker was not close at hand.”

There is nothing like a bold front after all. I feel myself borne up on a rising tide. The meeting at the Academy was a grand success.

I had a telegraph wire from my rooms in Beacon Street to the Athenaeum building, and my telephonic organ was placed in the my green reception room under the care of Willie Hubbard.

When the proper time came I rose to address the dignified assembly of grey heads [ill] before me and telegraphed to Willie Hubbard for some music. While I was speaking out burst the notes of the “Old Hundred: from an instrument upon the table to the delight of all.

When I spoke of the simultaneous transmission of musical notes I sent a telegraphic signal to Willie and in response came some full rich chords – and then an air with its proper accompaniment.

Everything was most successful and when I sat down I was somewhat surprised to be greeted by a hearty round of applause - which, I am informed is such an unusual thing in the Academy, that Mr. Scudder (who has been a Member for 12 or 14 years) says he never knew such a thing happen before.

Next day came a letter from the Institute of Technology asking me to repeat the address and the experiment before the Society of Arts on Thursday evening the 25th of May.

On October 11, 1876, by invitation, Bell himself presented a paper on telephony. The demonstration that followed this time included demonstrations of human speech through the telephone. At the meeting it was moved by Mr. [George B.] Emerson to “heartily congratulate professor bell on his wonderful discovery on telephony.”

This again was described by Alexander Graham Bell in a letter to his parents:

In my last note I referred to Monday evening as the proudest and happiest day of my life – but I was mistaken – Last night was!! The meeting at the Academy was a great Triumph. The last meeting there was as nothing to this. Not only was I again applauded (and I am the only lecturer that has ever received a round of applause from the grave members of the Academy) – but – upon motion of the Hon. Geo. B. Emerson the congratulations of the Academy were specially tendered me upon my great success. At the conclusion of the Meeting my instruments were tested with complete success. The various Members conversing with one another through the wire.