An Initiative of the America’s Language Working Group 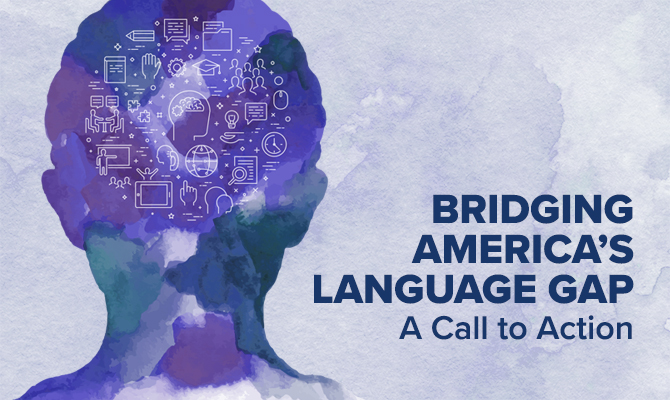 Leaders in American business, government, and education support a national effort to strengthen language education so that individual Americans can more effectively participate in a global society, and the nation as a whole can prosper in a global economy. To join the effort, contact John Tessitore at jtessitore@amacad.org.

Why is language education critical to America?

Language is the key to cultural understanding. While proficiency in English is essential in many facets of life in the 21st century, at home and abroad, knowledge of English alone is insufficient to meet the nation’s needs in a global society—as noted in America’s Languages: Investing in Language Education for the 21st Century, a report of the American Academy of Arts and Sciences. American industry participates in more foreign markets than ever before and the nation is engaged, diplomatically or militarily, in every corner of the globe. Challenges in scientific research and technological innovation all require greater international collaboration. And we have a social obligation, established in law, to offer critical social services in languages other than English.

As the Academy report states, “[B]y several measures, the United States has neglected languages in its educational curricula, its international strategies, and its domestic policies.” This oversight has had “adverse and often unforeseen consequences at home and abroad—in business and diplomacy, in civic life, and in the exchange of ideas.” A more forward-thinking strategy for meeting future needs would advance policies and investments that promote language education for all Americans.

We have a responsibility to ourselves and to future generations—as parents, educators, policy-makers, and leaders in business and government—to support language learning in the United States to achieve the following results:

We, the signatories, attest that the public and private sectors require greater capacity in languages in addition to English, and we urge greater support for languages in order to maintain and enhance American global leadership. We stand ready to do our part.

Nancy C. Andrews
Chair of the Board, American Academy of Arts and Sciences; Former Dean, Duke University School of Medicine

Rush Holt
CEO, American Association for the Advancement of Science

Geraldine Richmond
Secretary, American Academy of Arts and Sciences; Presidential Chair in Science and Professor of Chemistry, University of Oregon