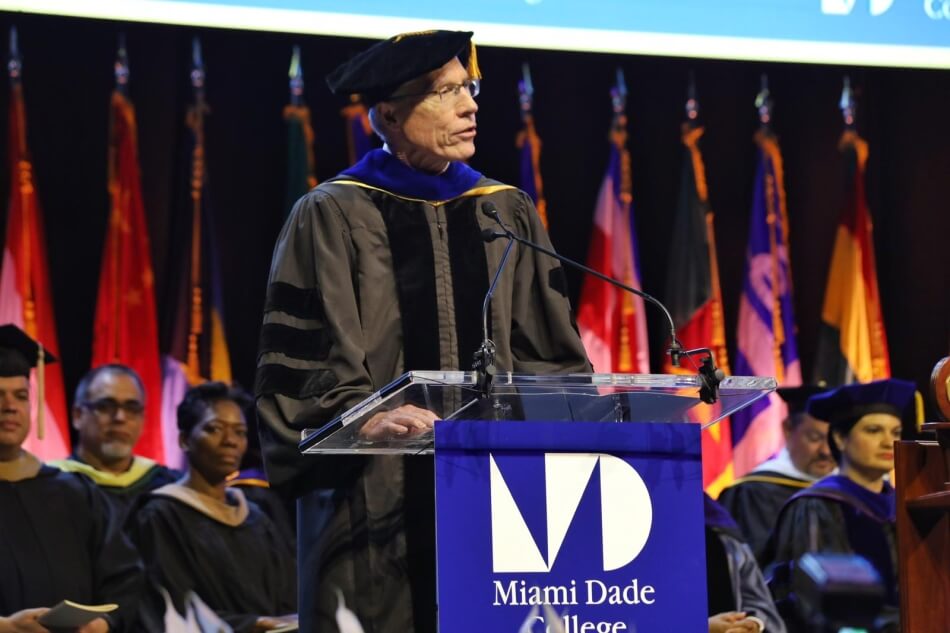 American Academy President David Oxtoby delivered the following remarks at the commencement ceremony for the North and InterAmerican Campuses of Miami Dade College on May 4, 2019.

I am tremendously honored to receive an honorary degree from Miami Dade College and to have the opportunity to speak to all of you, the 2019 graduates from the North and InterAmerican campuses. Congratulations to all of you for your hard work and accomplishments, and congratulations also to your family members and friends who are here to celebrate with you on this special day. I know that their support and encouragement have played a vital role in helping you to reach this transition point in your lives.

I understand from President Harrison that members of these graduating classes represent many communities from throughout Miami, the state of Florida, and the countries represented by the parade of flags, and also that some of you are studying to become translators and interpreters. In that spirit, let me say just a few words of welcome in Spanish and in Haitian Creole – please forgive my accent!

It is a real personal pleasure for me to be here as well, since I have known and worked closely with Miami Dade President Eduardo Padron over the last fifteen years to advance the causes of liberal education for a diverse democracy. I was delighted to hear that the InterAmerican Campus is being named in his honor upon his retirement.

I bring greetings to all of you from the American Academy of Arts and Sciences in Cambridge, Massachusetts, where I serve as President. This honorary society recognizes accomplishments across the fields of the arts, sciences, philanthropy, business, and public affairs. We are honored to include President Padron as one of our five thousand members. Founded in 1780 by John Adams, John Hancock, and others in the early days of this country, we have always sought to provide advice to the nation to advance our knowledge and welfare; we convene groups from across the country and around the world to address the problems that we face and the issues that divide us. The need for this work is as great now as it was when this country was first being founded.

One of our earliest members of the Academy, elected in 1791, was someone who has received a great deal of attention recently: Alexander Hamilton. You all know about the musical by Lin-Manuel Miranda, which tells the story of how he rose to become first Treasury Secretary of the United States, helping to build the foundations of our modern banking system and economy; his picture rightly appears on every ten-dollar bill that you hold or spend.

How did Hamilton reach the point of being one of the founding fathers of this country? As the musical tells us so powerfully, he was himself an immigrant to this young nation, born in the West Indies, some thousand miles southeast of Miami. His father left the family when he was only 10, and his mother died when he was 12 years old. Through sheer perseverance, Alexander taught himself to read and to keep accounts, found a job with a trading company, and succeeded in emigrating at age 18 to what were then the British colonies of North America. Arriving in New York City, his first step was to advance his education, enrolling in Kings College (now Columbia University); from there he served as George Washington’s chief of staff and played a lead role in laying the foundations for the United States Constitution.

At the very birth of the American democracy, one of its most important founding fathers, Alexander Hamilton was in fact an immigrant – not an “American by birth,” but an “American by choice,” one who reached these shores and helped to build not only his life and career but the country itself. Over the years, his political opponents attacked his birth and ridiculed his past, but he gave us in the Federalist Papers the definitive statement of our core democratic values: “the important question, whether societies of men are really capable or not of establishing good government from reflection and choice, or whether they are forever destined to depend for their political constitutions on accident and force.”

We face a parallel choice in modern-day America: whether through thoughtful exploration and reasoned debate we can bridge the divides that separate this country into opposed camps. This is a country that has been built by immigrants, from the earliest days of the Mayflower through the forced migrations of black slaves, from Chinese railroad workers to Norwegian farmers to Jewish scientists threatened by Hitler. How can we deny that heritage and deny the welcome symbolized by the Statue of Liberty?

I understand that a number of you who are graduating today are undocumented or DACA students, as were quite a few of the students at my former institution in California, Pomona College. Today, each of you will receive a document – a diploma – certifying that you have graduated from this College, having completed your course of study and prepared to enter into a range of professions and into full civic life. And yet, some of you are still being denied a different kind of document, one that certifies that you have the right to live in the country in which you have grown up. This is not fair; I urge you to work for the citizenship rights of the many millions of people who live in this country but are threatened with the possibility of being forced to leave the country they have chosen.

Leaders from Dr. Martin Luther King to Pope Francis have urged us all to build bridges, not walls. Walls separate us from our fellow human beings; they block people who could contribute to our country and our economy from finding work; they divide families and take children from parents. Walls are signs of fear and insecurity, suggesting that we need to protect ourselves from change and defend ourselves from people who are different from us.

A few years ago, I saw the US – Mexico border wall for the first time, at the junction between Mexicali, Mexico, and the US border town of Calexico. Metal, barbed wire, electronic surveillance, border guards in Jeeps: this is what the United States is constructing across thousands of miles of border. The only border I could recall that resembled it was the Hungary-Austria border I saw as a college student: part of the Iron Curtain that divided Europe in the late 20th century. But this was a wall built in the 21st century, in a new global era, by a democratic country to keep others out. What will the future think of this country, five hundred years from now, looking at the rusted remnants of a wall that will inevitably fail to hold back the forces of economic demand, or to cut off family relationships across this border? How will people try to explain the thousands of deaths occurring at the border, the families divided by immigration proceedings, and the economic exploitation of undocumented workers unable to protest their conditions?

I think of the words of Robert Frost, speaking of those much more harmless stone walls separating New England homesteads:

Before I built a wall I’d ask to know
What I was walling in or walling out
And to whom I was like to give offense.
Something there is that doesn’t love a wall . . .

I hope that those of you who are graduating today will instead use your education to break down walls, both literally and figuratively. I encourage each of you to cross borders, so you have the experience of seeing other countries and seeing the United States from the outside.

As you graduate, make it your life’s work instead to build bridges. Some of you will become teachers: help your students to believe in themselves and reach their highest potential. Some of you are graduating from the School of Justice: help to build relationships with the people you will serve in safe and secure communities. Some of you will be translators and interpreters: help people to build connections across barriers of language and culture. Some of you plan careers in science, the arts, or entertainment: use the talents you have been given to improve the world. Some of you will continue with further study before you enter the workforce.

The bridges you build will help to bring people together across all the divides that separate us. Your generation also is charged with building a bridge to the future: a pathway toward a world in which we can live together in a sustainable climate and a just society. Whatever you do after you leave this campus, take the values you have learned at Miami Dade College to build bridges and connect people in the communities you join.

Coming here and seeing all of you today gives me hope for our future. Congratulations to all of you and best wishes!