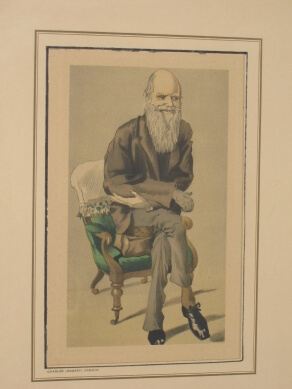 A protracted debate within the Academy over Darwin’s Origin of Species began with a paper on Japanese flora presented by Asa Gray in 1858, leading to an exchange between Louis Agassiz and William Barton Rogers, representing, respectively, positions opposed to and favoring Darwin’s views on evolution and natural selection. Darwin and Gray had been corresponding with one another since 1855. At Stated Meetings on December 14, 1858 and January 11, 1859, Gray presented three papers on the findings of an expedition to the Pacific that studied plant life. Based on this data, Gray posited that there was a single local origin for each species, rather than each species originating where it was found at the time of the expedition. Over the next year, Gray and Rogers argued with Agassiz and supporters like Benjamin Peirce about how new species came to exist and disseminate in particular regions of the world, with the former often using the previous arguments of the latter against them. The publication of Darwin’s On the Origin of Species in November 1859 further fueled the discussions.

While the debate was held at several public venues, especially at the Boston Society of Natural History, in March 1860 the intellectual contest came to the Academy with contributions opposing Darwin delivered especially by Agassiz and by John A. Lowell and Francis Bowen. The March events opened on the 13th, and continued on the 27th. Asa Gray’s important rejoinder and defense of Darwin began on April 10 and the exchange continued into May. In the months thereafter, there were other contributions to the discussion by various Members and from different vantage points.

Historically, these debates have been seen as a confrontation not only between intellectual concepts but between two powerful and opposing naturalists, Agassiz, the zoologist and defender of special creations in nature and species as unvarying ideals, on the one hand, and Gray, the botanist defender of Darwin who saw variation and relationships as an inherent aspect of the plant kingdom, but who was prepared to argue for the continued belief in tenets of natural theology that rested on the perception of design and purpose in nature. The locus of the debates within the Academy also underscored and facilitated the involvement of non-scientists in the issues at hand and showed that what was at stake was more than the esoteric concern of committed naturalists.