Project
Civil Wars, Violence, and International Responses
Back to table of contents
Share 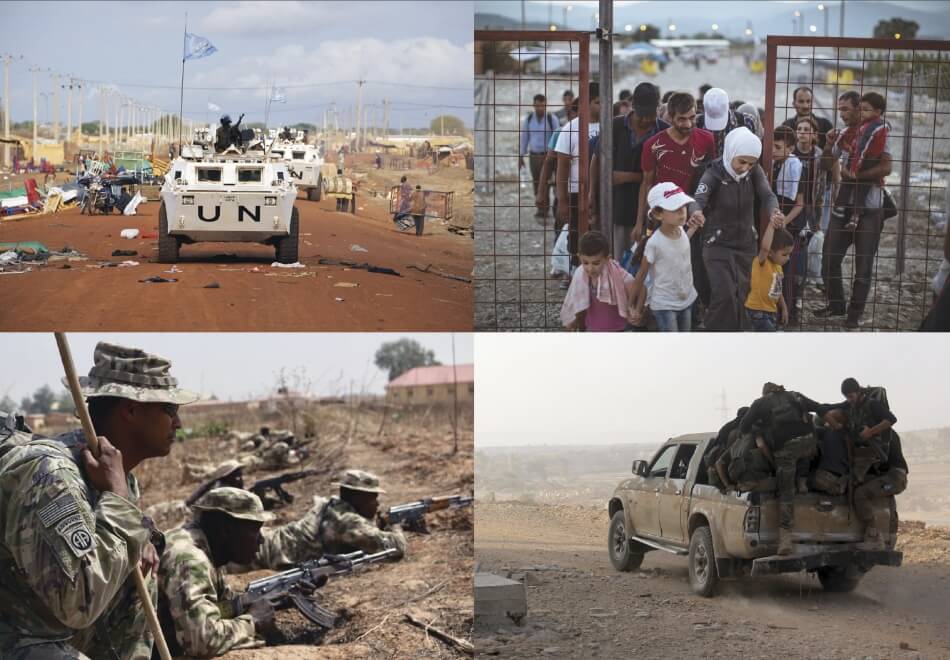 Civil wars can give rise to major threats to international stability, including transnational terrorism, pandemics, mass migration and refugee flows, and regional instability. While these complex threats do not arise solely from civil wars, the severe risks that they present call for careful evaluation of U.S. approaches to preventing and mitigating intrastate violence. Particularly serious concerns, which require more attention, include the ways that civil conflict can contribute to the emergence of infectious diseases, undermine efforts to respond to pandemics – such as through vaccine distribution – and generate transnational terrorism with a global reach.

These are among the key findings shared in a new policy paper, “Good Enough” Governance: Humility and the Limits of Foreign Intervention in Response to Civil Wars and Intrastate Violence. Building on the Academy’s Civil Wars, Violence, and International Responses project, the paper provides a practical road map to articulate under what conditions the United States should intervene in civil wars and with what tools, and offers recommendations on cooperating with allies and empowering friendly domestic actors to address issues internally. The project, which was launched in 2015, has produced two issues of Dædalus that explore the transnational security threats emanating from civil wars and weak states, and identify policy options for mitigating these threats and for addressing civil wars where U.S. national security interests are at stake. “Good Enough” Governance builds on that research as well as on feedback received during consultations with policy-makers in the United States, internationally, and at the UN. Written by project cochairs Ambassador Karl Eikenberry and Professor Stephen Krasner, the paper includes their reflections on the project’s policy implications, with a particular focus on the most relevant areas for the United States.

“Good Enough” Governance: Humility and the Limits of Foreign Intervention in Response to Civil Wars and Intrastate Violence identifies some of the major issues that policy-makers should consider when designing their responses. For instance, civil wars vary significantly based on the participants’ motivations. When combatants are motivated by material objectives and accept the principles of the existing international order – especially state sovereignty – the “standard treatment” (a combination of mediation and UN or regional peacekeeping forces, along with foreign assistance) can be effective. This is especially true if the great powers are in agreement and if the combatants have reached a stalemate, or if one combatant wins, as was the case in Sri Lanka in 2009. But the standard treatment will not work in cases in which combatants reject the existing international order, like some transnational ideological movements.

In addition, intervention pre­sents a variety of potential pitfalls for foreign powers who set goals that are unrealistic, overly ambitious, or not shaped by local political realities. This is true not only for interventions employing military force but for other types of intervention, including technical assistance and foreign aid. Ambitious efforts to sustain and increase economic growth, eliminate corruption, and consolidate democracy may be counterproductive if they are incompatible with the interests of local elites.

Taken together, this means that even in places where the standard treatment is likely to be successful, the ability of external interveners to put countries on the path to consolidated democracy and economic prosperity is seriously limited. In some cases, especially where parties to the conflict cannot be reconciled with the international system, achieving complete, “positive peace” may not be feasible in the short term. This presents the United States, its partners, and multinational and international organizations with difficult choices. In the paper, Eikenberry and Krasner recommend a set of policy principles that should guide international responses:

Given the threats that civil wars and fragile states can pose for major powers, U.S. policy-makers should not ignore these issues, but the potential pitfalls associated with efforts to produce good governance from the outside mean policy options are often limited. Eikenberry and Krasner argue that the United States should focus on what is most realistically achievable: that is, “good enough” governance. They define this as designing policies that prioritize generating relative security and stability; improving the function of some essential institutions, especially healthcare (with systems that can help prevent the emergence of pandemics); taking into account the political realities of states experiencing civil war and internal violence; and creating moderate economic growth. The authors argue that pursuing this more realistic goal is likely to improve not only the security of the United States but the living conditions of individuals in places susceptible to civil wars.

The Academy is planning a series of virtual activities designed to share the paper and its recommendations with key audiences, particularly U.S. policy-makers. The events include briefings to members of Congress and their staff, especially among relevant committees in the House and Senate, as well as briefings with the Department of State, Department of Defense, and the National Security Council. The Academy is also planning some virtual events to engage with policy audiences in Europe and with several UN agencies that consulted on the project.

To read the policy paper and to learn more about the project on Civil Wars, Violence, and International Responses, visit www.amacad.org/civilwars.