Project
The Lincoln Project: Excellence and Access in Public Higher Education
Back to table of contents
Share 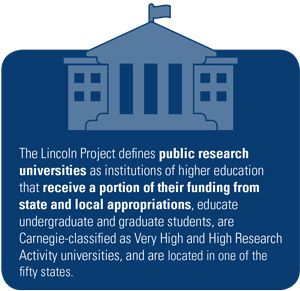 Since it began its work in January 2013, The Lincoln Project: Excellence and Access in Public Higher Education has studied the important role public research universities play in their communities and in the nation, and assessed the implications of rapidly declining state support for public higher education. On April 7, 2016, The Lincoln Project released its final report, Public Research Universities: Recommitting to Lincoln’s Vision – An Educational Compact for the 21st Century, with new recommendations for stabilizing and strengthening the nation’s public research universities that serve approximately 3.8 million students each year and perform much of the country’s groundbreaking research.

An Educational Compact for the 21st Century argues that public research universities cannot continue to cut academic programs without a negative impact on educational quality, and cannot further raise tuition without simultaneously increasing need-based financial aid. In this context, the report acknowledges that these institutions must pursue new revenue streams and cultivate partners from across the private and public sectors. Most importantly, the report formulates a new educational compact – a call for state and federal governments, universities, businesses, and philanthropic organizations to come together in support of America’s public research universities. Each sector has a role to play in preserving and strengthening these institutions, which are an essential component of the nation’s intellectual infrastructure and a key driver of American education, research, culture, and the national economy.

An Educational Compact for the 21st Century urges public research universities to lead the charge in forging this new compact. The report offers specific recommendations that these institutions might consider, including:

Some of the recommendations An Educational Compact for the 21st Century offers to state governments, the federal government, and the private sector include: 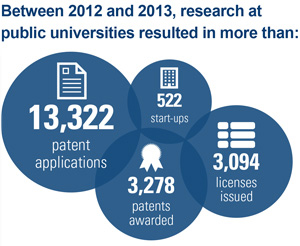 Recommendations for the federal government:

Recommendations for the private sector:

The Academy has disseminated broadly all five Lincoln Project publications to its membership, as well as to federal and state-level policy-makers and policy and higher education organizations. Over the next six months, The Lincoln Project will be holding events across the country with key leaders and partners at the institutional, state, regional, and federal levels to discuss how to implement the project’s final recommendations. Outreach meetings have been held already in Florida, Louisiana, Tennessee, Michigan, Texas, and Massachusetts.

Additional information about The Lincoln Project, including a short animated video and digital access to all of the project’s publications, is available on the project’s website.