The American Academy of Arts & Sciences is awarding Margaret Atwood the Emerson-Thoreau Medal for her distinguished achievement in the field of literature. Over more than five decades, Atwood has written more than fifty works – including fiction, poetry, critical essays, nonfiction, children’s books, and graphic novels – and has been published in more than forty-five countries and translated into dozens of languages. Her most recent novel, The Testaments, was a co-winner of the Booker Prize in 2019. 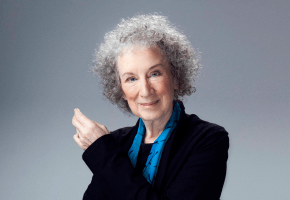 The Emerson-Thoreau Medal is awarded to an individual for overall literary achievement rather than for a specific work. Named for Ralph Waldo Emerson and Henry David Thoreau, the medal was first given to Robert Frost in 1958, and has since been presented to other notable authors such as T.S. Eliot, Hannah Arendt, Saul Bellow, Norman Mailer, and Toni Morrison. Atwood was elected to the Academy in 1988.

“Margaret Atwood’s literary achievements are extraordinary, and so is the impact of her work,” said David W. Oxtoby, President of the American Academy of Arts & Sciences. “Her brilliance and imagination pull us into her writing completely and we emerge changed by it and seeing our world differently. She has inspired multiple generations to examine questions of power – especially regarding gender and the environment – and to examine their values and choices.”

When notified of the Academy’s award, Atwood responded “I am thrilled to be receiving the Emerson-Thoreau medal. It is especially meaningful as Thoreau was an inspiration to my father as he made his self-reliant way from the backwoods of Nova Scotia to the University of Toronto. He is also an early example of civil disobedience on a matter of principle. I am grateful for this honour.”

Born in Ottawa, Canada, Atwood spent her early years in northern Quebec. She earned an undergraduate degree from Victoria College at the University of Toronto in 1961 and a master’s degree from Radcliffe College of Harvard University in 1962. She served as president of the Writers’ Union of Canada and president of International PEN, Canadian Centre (English Speaking). Earlier in her career, Atwood taught English at several Canadian universities and served as a writer-in-residence at universities in Australia, Canada, and the United States.

She has earned dozens of honorary degrees and numerous awards, including the Booker Prize (2019 and 2000), the Peace Prize of the German Book Trade (2017), the Franz Kafka International Literary Prize (2017), the PEN Center USA Lifetime Achievement Award (2017), and the Los Angeles Times Innovator’s Award (2012).

The American Academy of Arts and Sciences, founded in 1780, honors excellence and brings together members and other leaders across disciplines, fields, and professions to pursue nonpartisan research and provide critical insight on issues of profound importance to the nation and the world. Areas of focus include the arts and humanities, democracy, education, global affairs, and science policy.