Elected to the Academy in 2002 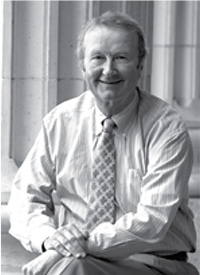 With the passing of Dave Frohnmayer on March 9, 2015, we have lost a remarkable statesman and friend. Although the sadness that comes with his absence will be felt for a long time, we can find comfort in reflecting on this amazing man’s life. He leaves behind a powerful legacy as a charismatic leader in the national and statewide political arena, in public higher education, in the health sector, and in a multitude of other public service roles.

Dave Frohnmayer was a dedicated and visionary leader who would give as much to the nation as to his beloved state of Oregon. After growing up in the small town of Medford, Oregon, Dave attended Harvard University for his undergraduate education and the University of California, Berkeley for his law degree. He was also a Rhodes Scholar at Oxford University in England. In 1969, he began his national service as special assistant to Elliot Richardson, then the U.S. Secretary of Health, Education, and Welfare. While in Washington, D.C., he met his future wife Lynn, an Oregon native, Stanford graduate, and former Peace Corps volunteer who had just finished teaching English on the Ivory Coast.

Oregon was the great beneficiary of their talents: they moved back to their home state in 1971, when Dave joined the faculty of the University of Oregon School of Law. He next served from 1974 to 1980 in the Oregon House of Representatives. Earl Blumenauer, a U.S. Representative from Oregon (D) who served with Dave in the state legislature during this period, remembers him as a “voice in the finest tradition of progressive Republicanism in Oregon. Dave was thoughtful, reform-oriented, and was a great partner to work [with] on legislation and public policy.” Dave subsequently served as the Oregon attorney general, winning three consecutive terms in office (in 1980, 1984, and 1988). A fierce defender of public values, his legacy endures through the transparency in government that he assured via clarifying and creating landmark Oregon public records laws. A gifted attorney, he was also victorious in six of the seven cases he argued before the U.S. Supreme Court.

With his appointment in 1994 as president of the University of Oregon, he became the state’s most prominent advocate for higher education: someone who knew how both the state capitol and a state university were supposed to work. For fifteen years he served as president, including some of the most difficult financial years faced by public higher education in the state. I had a front-row seat to observe his leadership during this period, serving as a governor appointee to the State Board of Higher Education, the governing board for public higher education institutions in Oregon. In meetings in which institutional parochialism often tainted discussions, President Frohnmayer would rise above the fray with eloquent oratory that would impress even his opponents with his ability to clarify issues and assist in developing a unifying path forward. He was a master in his ability to bring people together and build successful partnerships. He was also a master in knowing when to push and when to be patient. During his tenure as president of the University of Oregon, he helped the university add nineteen new degree programs, double the number of federal research grants, increase student enrollment, build or renovate fourteen campus buildings, and raise $1.1 billion.

The American Academy of Arts & Sciences has also been the beneficiary of his wisdom and expertise following his election as a Fellow in 2002. He served as a member of the Board of Directors of the Academy, and as a member of the Compensation Committee, Audit Committee, and the Committee on Development and Public Relations. His willingness to be an active member of the Advisory Committee of The Lincoln Project: Excellence and Access in Public Higher Education further demonstrated his passion for the health and vitality of public higher education in this country. His exemplary service to the Academy was characteristic of the many other leadership roles that he took, including serving on the Ford Foundation Board of Directors, the Executive Committee of the Association of American Universities, and as the founding director of the National Marrow Donor Program.

While Dave savored his efforts in public service, he was equally dedicated to his family and the pursuit of a cure for Fanconi anemia, the rare genetic medical condition that had taken the lives of two of his daughters and threatens his third daughter. In 1989, he and his wife Lynn founded the Fanconi Anemia Research Fund to find effective treatments and a cure for Fanconi anemia and to provide education and support services to affected families worldwide. Their efforts have resulted in significant breakthroughs in the understanding of Fanconianemia. With their help, researchers have now identified the genes that cause the disease, as well as genes linked to breast and ovarian cancer. Fanconi anemia patients are now living longer because of the efforts of the Frohnmayers.

With his passing has come an outpouring of stories of the wisdom, leadership, sense of humor, generosity, and humility that defined his life. The stories illustrate in very human terms how he inspired others to achieve their best and to never stop giving. Even in his final days, when only his closest friends and family knew of the seriousness of his cancer, he was teaching his leadership course to students at the university and driving from Eugene to Portland to attend a charity event. The effects of that endless giving that he practiced while living will continue well beyond his passing. To his devoted wife Lynn, sons Mark and Jonathan, and daughter Amy, we extend our heartfelt condolences. We will miss Dave more than words can express and we hope that, in his memory, we can give to others as he did for so many of us.

Geraldine Richmond
Presidential Chair in Science and Professor of Chemistry,
University of Oregon