By
Gerald Holton
Back to table of contents
Share

Elected to the Academy in 1952 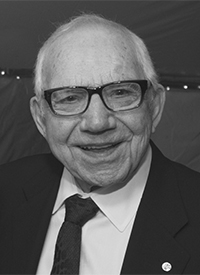 It is with profound sadness that the Academy notes the death of former Academy President Leo L. Beranek on October 10, 2016, at age 102. Dr. Beranek served as President from 1989 to 1994. He was an active and devoted member of the Academy, participating on the Council (1994–1999), the Development and Public Relations Committee (serving as it founding Chair, 1997–2003), the Investment Committee (1999–2001), the Budget Committee (1999–2000), and the Strategic Planning Steering Committee (1998–1999). As Chair of the Development Committee, he led the Academy’s first major campaign–the Third Century Fund. Among his many prizes and awards, he was the first recipient of the Academy’s Scholar-Patriot Award, and the Library at the House of the Academy in Cambridge is named in his and his wife Gabriella’s honor.

What a beneficent life! Leo Beranek, born in a simple Iowa farm village of 400 souls, struggling hard during the Great Depression, rose to exemplary leadership in a startling variety of important roles.

He was a scientist, technologist, inventor, industrialist, author, philanthropist, and leader of major institutions. Those ranged from initiating Harvard’s war-time Electro-Acoustic Research Laboratory, to coleading the high-technology company Bolt Beranek and Newman (BBN), to serving as the head of a new kind of television station, to being President of our Academy, and more. At each stage, he envisioned exploring new areas of national importance, and attracted with an easygoing charisma those he wished to work with him.

I recommend his autobiography Riding the Waves: A Life in Sound, Science, and Industry (published by The MIT Press in 2008). It is a gripping account of how the fabled “American Dream” may become a fact. Throughout the book, his native generosity and “can-do” attitude come through, starting with an early section entitled “A Momentous Encounter.”

While still a student beset by poverty, he happened one day to see a man glumly trying to change a flat tire. Leo offered to help, and he wrote that after some conversation, “I had a new friend. He wanted to know if I had considered going to a university where, as it happened, the man had been an instructor. ‘No,’ I said, that’s a rich man’s school.” The encounter ended with Leo receiving a recommendation from this man and being admitted to the university with a scholarship.

From then, Leo took off. To paraphrase a popular saying in a new context, a good fate can prepare a person deserving it, and benefits those working with him.