Elected to the Academy in 1994 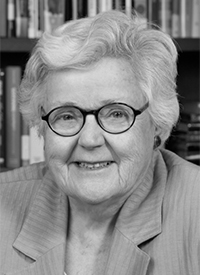 When Mary Maples Dunn in 2011 began her final administrative position, as co-director of the Visiting Scholars Program at the American Academy, she announced that she would act as “mother hen” to the Scholars. Her definition of that role, it turned out, included much more than her warm supportive interest in each of her charges. She brought to her work with the Visiting Scholars Program high intelligence, a broad range of knowledge, and an unfailing enthusiasm for intellectual exploration. At least equally important were her rigorous intellectual standards, her willingness to articulate them, and her ability to criticize a Scholar’s work even harshly without making its author feel personally attacked. The Scholars loved her, appreciating her commitment to their enterprise, enjoying her zest for life, and responding to her “wicked humor” (as one of them called it) as well as to her energy, her wisdom, and her warmth.

She brought these same qualities to a series of important and previous posts, serving as Dean of Bryn Mawr College, where she had obtained her Ph.D.; President of Smith College; Director of the Schlesinger Library; first Dean of the Radcliffe Institute; and co-Executive Officer of the American Philosophical Society. Earlier, she pursued a scholarly career as an early-American historian, pioneering in interdisciplinary work. In all these roles, she demonstrated her gift for enabling others to manifest their best selves. Both forthright in articulating her own views and generously open to opposed possibilities, she leaves a record of progress achieved in several institutions, from Bryn Mawr College, Smith, and Harvard to, toward the very end of her life, the Bryn Mawr Bookshop in Cambridge, on which she bestowed, to good effect, her organizational skill and her extraordinary energy.

The qualities that made Mary Dunn a great administrator also made her a marvelous friend and companion. The frequent dinners she gave (and cooked) for the Visiting Scholars became occasions for relaxation and merriment, never stiff and formal. As the Scholars arrived, Mary would enlist them in the common enterprise: setting the table, answering the door, hanging up coats, carrying dishes from the kitchen. This unexpected manifestation of her administrative skill helped make social life seem easy and natural. Being with her meant having fun.

Samuel Johnson, the eighteenth-century English moralist, notoriously preferred a woman who could make an apple pie to one who could write a scholarly book. Mary could do both, with equal enthusiasm and with striking success. The coherence and integrity of her life and work embodied a humanistic ideal that cheered and enlightened her associates.

Mary Maples Dunn died in Winston-Salem, NC, on March 19. She is survived by her husband, Richard Dunn, and two daughters.