By
Maxine L. Savitz
Project
The Alternative Energy Future
Back to table of contents
Share

Elected to the Academy in 2010 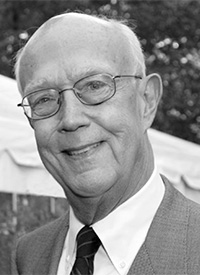 It is with profound sadness that I note the death on October 10, 2014, of Robert W. Fri, my cochair on the Academy’s Alternative Energy Future project. Bob was an influential expert on energy policy and a renowned leader in government and nonprofit circles. His extraordinary vision, intelligence, and strategic skills made him the ideal person to lead public policy studies, which he did with remarkable success for the American Academy, the Department of Energy, and the National Research Council, among other organizations.

Throughout Bob’s distinguished career he demonstrated an exceptional ability to distill the most salient conclusions from wide-ranging conversations. On more than one occasion, at the end of a long workshop when most of the participants in the room were still sorting quizzically through their notes, Bob would break the impasse by saying, “Here are what I take to be the four main points from this meeting. . . . ” He would then go on to propose, in extraordinarily clear and concise terms, what the next steps should be.

His popularity as a leader owed equally to his trademark folksy manner and dry wit. I recall his response to an unusually long email that I composed on a cross-country flight home to Los Angeles, with a large number of comments and suggestions on a proposed workshop agenda. His reply was simply, “All good suggestions. I’m glad you had a long flight.”

Later, upon learning of my election to the Academy, Bob described the Academy’s annual Induction Ceremony as a “hoot” and encouraged me to attend, although he did warn that “there are some of us who question whether bagpipes should ever be played indoors.”

Born in Kansas City and educated at Rice University and Harvard Business School, Bob spent several years at McKinsey and Company before moving into public service in 1971. As the first deputy administrator both of the U.S. Environmental Protection Agency and the Energy Research and Development Administration (ERDA, the predecessor to the U.S. Department of Energy), Bob played a major role in setting up the organizational structure of these agencies. He later served as president of Resources for the Future and of the National Museum of Natural History, in both cases guiding these organizations through a tumultuous time of transition.

I first met Bob at ERDA in 1975, when he was the Deputy Administrator and I was responsible for developing and implementing energy efficiency R&D programs in the buildings and industry sectors. Interest in government energy programs had developed as a result of the 1973 oil embargo and there was pent-up demand among industries, academics, and national laboratories to help address the end-use sector. My program, however, did not have a large budget – less than $10 million – and it lacked the long history of the rest of ERDA, which had been part of the Atomic Energy Commission. Bob was instrumental in helping me to establish a portfolio approach to identify the most important areas on which to focus and to select the best proposals from over six hundred unsolicited applications for limited funds.

Bob also supported the hiring of social scientists for the ERDA buildings program, and they were able to conduct rudimentary marketing campaigns, “feedback” programs for consumers, and other studies that helped guide our technology deployment efforts. Such nontraditional R&D programs and approaches were supported by Bob throughout his career, and laid the groundwork for today’s resurgent interest in how consumers’ beliefs and behaviors influence their energy choices.

Bob was truly a wise mentor, always able to enlist the best people and empower them. This led to the remarkable success in the development of energy efficient technologies for lighting, windows, refrigerators, and more, and their commercialization by the private sector.

Bob was an early proponent of the importance of determining and measuring the outcomes of government programs and policies. I was fortunate to serve on several National Research Council committees that he chaired. Many of these studies developed methods to determine the retrospective and prospective benefits of DOE’s energy R&D programs. A 2001 study, Energy Research at DOE: Was It Worth It? Energy Efficiency and Fossil Energy Research 1978 to 2000, is still quoted by the U.S. Secretary of Energy and serves as a model used to review other government programs.

In 2010, Bob was an active member of the working group for the President’s Council of Advisors on Science and Technology study, Accelerating the Pace of Change in Energy Technologies Through an Integrated Federal Energy Policy. His key contributions regarding the concept of innovation in the energy area led to one of the study’s major recommendations that DOE and the National Science Foundation establish a joint interdisciplinary program with social scientists to understand the social and regulatory barriers to the adoption of new energy technologies. This recommendation guided the establishment of the Academy’s Alternative Energy Future project, which Bob directed from its inception in 2010, and which I had the privilege to chair with him.

Bob was a remarkable leader, a visionary on energy policy, and a truly wonderful and humble person. He had a wide and diverse circle of friends and colleagues. His humor and modesty were captured at his memorial service: Having selected all of the music and readings, Bob decreed that no one should stand to speak about him or his career. He told the pastor that should anyone be tempted to do so, he would haunt them for the rest of their life.

I am grateful for Bob’s wise counsel and for his steadfast commitment to progressive environmental and energy policy. He will be sorely missed.