New Academy Report on Science During Crisis: Why Does it Matter? 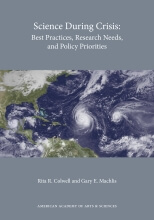 Since 2014, the global community has experienced more than 1,600 disaster events causing more than 75,000 deaths and an equivalent of 917 billion USD in damages.1 Weather and climate disasters – along with natural hazards, such as earthquakes, public health crises, and human-caused contaminant spills – threaten human lives and pose challenges to relief efforts, to the restoration of ecosystems, and to the rebuilding of communities. Science – biological, physical, social, behavioral, cultural, engineering, and medical, as well as interdisciplinary geohealth – plays an important role in response and recovery and can contribute immensely to disaster prevention. For example, science has provided essential data during disasters in the United States, from the Deepwater Horizon oil spill in 2010, to Hurricane Sandy in 2012, to the Zika virus epidemic in 2016, to the Kilauea eruptions of 2018.2 And yet, limited attention has been given to the application of science during disasters, including data collection, science communication to and with decision makers and citizens, and the integration of scientists into crisis response teams.

The Report: A Call to Action

To address this area of need, the Academy published Science During Crisis: Best Practices, Research Needs, and Policy Priorities on March 19, 2019, as a part of the Public Face of Science initiative, which is funded by the Gordon and Betty Moore Foundation, the Alfred P. Sloan Foundation, and the Rita Allen Foundation. The report suggests best practices for improving the use of science during crisis, topics to include in a research agenda, and policy recommendations for how to improve science during crisis. These recommendations are the result of findings discussed at an April 2017 workshop held at the House of the Academy on best practices for crisis response in the United States. The workshop convened a wide range of experts, including policy-makers, scientists, and representatives from NGOs and was chaired by the co-authors of the report, Rita R. Colwell (Academy member; former Director, National Science Foundation; and Distinguished University Professor, University of Maryland) and Gary E. Machlis (former Science Advisor to the Director of the U.S. National Park Service; and University Professor of Environmental Sustainability, Clemson University).

At its core, the report is a call to action for federal, state, and local agencies, academic institutions, professional organizations, and stakeholders who rely on and use science during crises. With increased population growth and the impact of climate change, future climate and weather disasters are predicted to be more frequent, severe, and deadly. It will be essential, therefore, that science is used to aid in the prevention and recovery of these disasters, and it will be particularly important for the communities most affected. The report has received a very positive reception and the Academy is hopeful that the recommendations will help inform best practices, research needs, and policy priorities.

On March 19, 2019, the Academy released the report at a launch event held at the National Press Club in Washington, DC. The event, covered by CSPAN, featured co-authors Rita Colwell and Gary Machlis, as well as Brad Kieserman, Vice President for Disaster Operations and Logistics at the American Red Cross, and David Oxtoby, President of the American Academy. Mr. Kieserman commented on the importance of the recommendations, in particular the recommendation to employ a science advisor within disaster response organizations. At the event, Academy member Marcia McNutt, President of the National Academy of Sciences (NAS), similarly emphasized the importance of the report and spoke about how the NAS and the American Academy might collaborate in the future to further address this topic.

Prior to the report’s release, the authors and Academy staff briefed senior disaster personnel from several federal agencies, including the White House Office of Science and Technology Policy, the National Oceanic and Atmospheric Administration, the U.S. Geological Survey, the Federal Emergency Management Agency, and the Department of Health and Human Services. Several officials expressed particular interest in the recommendation for FEMA to “refine language referencing the Science and Technology Advisor position outlined in the 2017 National Incident Management System (NIMS) revision, as well as associated supplemental guidance and tools” and for “[f]ederal agencies and academic institutions [to] ease and/or expedite administrative restrictions on collaboration, information sharing, and data collection to enable more effective science during crisis.”

Gary Machlis presented the report’s findings at a June 2019 workshop on Multi-Hazard Data Science, held at the University of California, Davis and co-sponsored by the University of California system and the Association of Pacific Rim Universities hub at Tohuku University in Sendai, Japan. The report will also be featured in sessions at the upcoming International Conference on Disaster Management and Human Health Risk: Reducing Risk, Improving Outcomes in Ancona, Italy, in September 2019, and at the 2020 AAAS Annual Meeting in Seattle in February 2020.

Topic areas for recommendations for a research agenda: