A New Profile of Humanities Departments 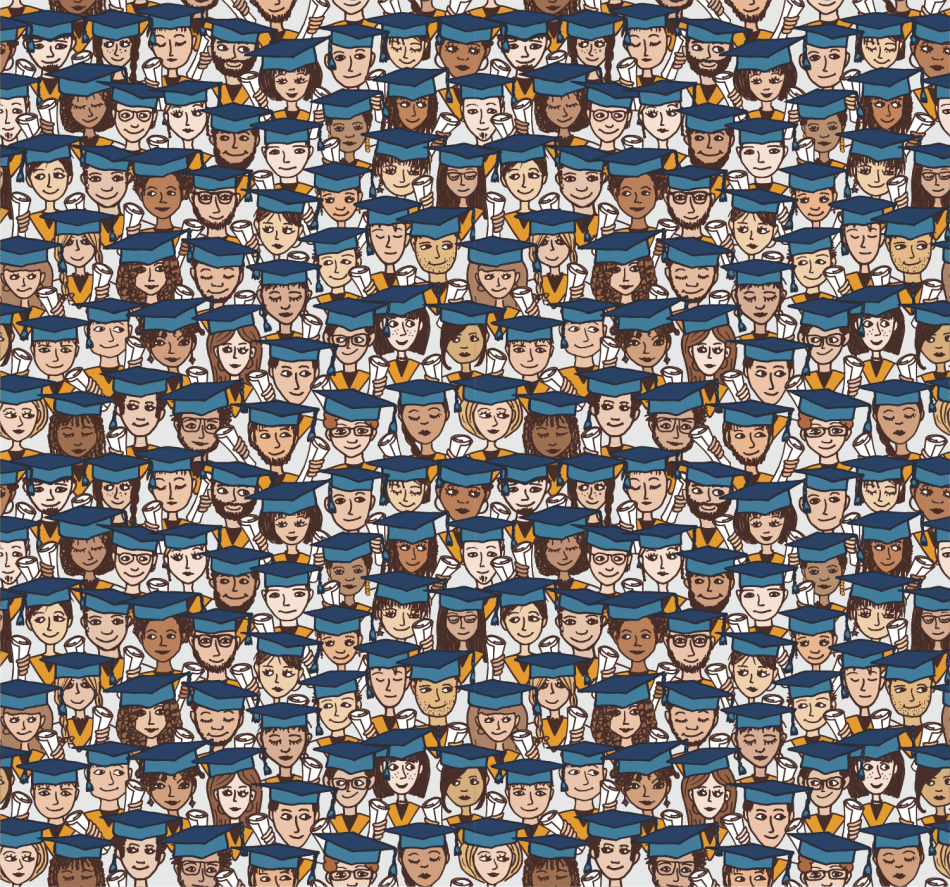 Since 2013, when the American Academy’s Humanities Commission issued The Heart of the Matter report, there has been considerable media discussion about declining humanities majors, an anemic academic job market, and general perceptions of a field in crisis. A new study by the Humanities Indicators, completed on the eve of the COVID-19 crisis, provides a fresh look at these questions.

The new report (available at https://bit.ly/HDS3Intro) is based on a survey of 1,419 departments in ten humanities disciplines (art history, classical studies, English, folklore, history, history of science, languages and literatures other than English, musicology, philosophy, and religion) and six adjacent disciplines (American studies, anthropology, communication, linguistics, race/ethnic studies, and women/gender studies). As the third survey in a series that started just before the Great Recession in 2007, the study not only offers benchmark data on the numbers of faculty and students, it also explores other characteristics of humanities depart­ments as well as statistically significant changes.

But the trend among majors offers a more troubling sign for the field. The survey (and related data from the U.S. Department of Education) reveals that from 2012 to 2017, there were statistically significant declines in the number of undergraduate degree recipients in many of the large humanities disciplines (see Figure 1). This led to an overall decline in the average number of degree recipients across the humanities. Moreover, in three disciplines (history, philosophy, and religious studies) a decrease in the average numbers of undergraduate majors signaled further declines to come in those departments.

Despite the troubling evidence among majors and undergraduate degrees, there was no statistically significant change from 2012 to 2017 in the average number of students completing minors in any of the disciplines. In recent years, a growing number of humanities departments have been introducing new minor fields as a way to expand their interdisciplinary or topical appeal (with concentrations ranging from medical humanities to Viking studies). The recent trend indicates that these efforts have had greater success than those used to attract new majors in most of the disciplines.

At the graduate level, the survey results suggest more continuity than change. Despite recent difficulties in the academic job market, the survey found very little difference in the average number of students pursuing advanced degrees. The only two exceptions were in English and languages and literatures other than English. (The survey does not parse doctoral students from those pursuing master’s degrees.)

One of the most cited reasons for the decline in humanities majors is the perception that there are fewer job opportunities for students in the field (even though an earlier Humanities Indicators report largely belies that perception by showing the success of most humanities majors in the workforce; that report is available at http://bit.ly/HIWorkforce2018). The study finds that one potential challenge may be the career services programs at many colleges and universities. Approximately a third of humanities departments rated the quality of these career services programs at their institutions as “fair,” and another 10 percent regarded the programs as “poor” or “very poor.” (Curiously, another 4 percent of the departments thought their institution lacked any career services program for their students.)

At the same time, most humanities departments were not particularly active in assisting or promoting career development among the students in their departments. Less than a quarter of the departments offered any sort of professional program (such as a teacher credentialing, public history, or journalism program); and while most departments indicated they offered career orientation opportunities (such as lectures by alumni or internships), relatively few required their students to participate in them. For example, only 2 percent of the departments required an internship in an employment setting. One notable exception is communication departments, which were more likely to offer some form of professional credential and also had the most positive view of the career services programs at their institutions.

Another subject of interest in recent conversations about the humanities focuses on the trends in humanities faculty. Following a sharp decline in the number of tenure-line job openings during the Great Recession, writers in The Chronicle of Higher Education, The New York Times, and elsewhere have speculated about sharp declines in the number of tenure-track faculty and their replacement by adjuncts. Contrary to the perceptions raised in those reports, the survey showed very little change in the average number of faculty in each of the departments from 2012 to 2017. The only disciplines that had a significant change in faculty numbers were linguistics, which showed a statistically significant increase, and combined language departments, which experienced a statistically significant decrease.

Also contrary to expectations, the survey found no statistically significant changes in the tenure distribution of the faculty members in these departments (for the second time since the Great Recession). Approximately 62 percent of humanities faculty members at four-year institutions are employed in tenure-line positions (either on the tenure track or with tenure). The survey did find substantial differences in the mix of tenured, tenure-track, and non-tenured faculty between the disciplines, but the only discipline to report that a majority of their faculty were employed outside the tenure stream was communication. (Communication is also one of the only disciplines in the study to see substantial growth in the numbers of departments and to report no decline in advertised academic positions.) Across all the disciplines in the survey, approximately 77 percent of faculty members were employed full-time.

While there has been little evidence of significant changes in humanities faculty over the past decade, there is cause for concern in the future. In 2008, just as the previous financial crisis hit colleges and universities, the number of undergraduate majors and students had been rising in most humanities disciplines for more than a decade. That trend put pressure on colleges to maintain continuity in faculty levels and departmental support through the financially lean years that followed. Unfortunately, as many colleges and universities face a fresh round of financially wrenching challenges as a result of the COVID-19 pandemic, most humanities disciplines find themselves in a much weaker position – following declines in students and majors that extend back eight to ten years.

As higher education starts to negotiate the challenges of the pandemic, one of the other striking findings from the survey is the small number of humanities departments that were already teaching courses online. As of 2017, less than one third of humanities departments were teaching even a single course online, which speaks to the challenges many departments (and their faculty members) faced in the rush to provide online instruction this past spring.

Another notable finding is the relatively small share of departments that has someone who specializes in digital humanities. Even though the field has generated substantial interest in the media, the survey shows that only a minority of humanities departments had a faculty member specializing in that work. As of 2017, only 27 percent of the departments represented in the survey (excluding anthropology) reported that they had a specialist in digital humanities. Given the type of work that these scholars produce, it is also notable that a substantially smaller share of departments (20 percent) had formal guidelines for evaluating digital publications for tenure and promotion.

Finally, given rising concerns about the relationship between the humanities and the public, the survey also explores what departments are doing to bridge that divide. Unfortunately, the results are mixed. In approximately half of the humanities departments, faculty members, staff, or students had been involved with state humanities councils or community organizations. However, when asked about other forms of community outreach (and particularly into spaces that might help feed majors into their departments), the levels of engagement were lower. While 43 percent of departments had participated in community-service endeavors involving primary or secondary schools, less than a quarter of departments had worked with community colleges “to attract new majors into their programs.”

Given the mixed evidence of engagement beyond their colleges, it is perhaps unsurprising that only 11 percent of humanities departments considered the public humanities a significant factor in tenure and promotion decisions (and with so much variation between the responses, the finding is noted with a caution about the reliability of the results).

With the exception of the trend observed in undergraduate student majors, the past two surveys (the first comparing 2007 to 2012, and now comparing 2012 to 2017) have found more continuity than change in humanities departments – which was not what most in the field had predicted following the Great Recession. As the field and higher education as a whole prepare to work through the effects of the COVID-19 pandemic on their budgets, their students, and their faculty, the Humanities Indicators is already preparing the next round of the survey to try to measure the effects.