New Report Explores the State of the Humanities in Higher Education

Recent discussions about the state of the humanities in higher education have portrayed the field as beleaguered and declining. As a corrective, the Academy released a new report in early April, The State of the Humanities: Higher Education 2015, which is intended to provide a more balanced and evidence-based depiction of the health of the humanities on college and university campuses. 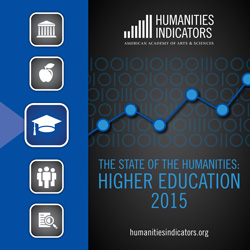 While it examines the trend that has fed the story of decline in the field – a shrinking share of degrees at the baccalaureate level – the report also notes signs of stability or improvement for the humanities fields, including evidence of rising interest in the humanities at the pre-baccalaureate level (indicated in rising numbers of AP tests taken and community college degrees earned), increases in funding (from low levels, in comparison to other fields), and a steady stream of new academic books in the field.

The State of the Humanities: Higher Education 2015 draws on the latest research and analysis from the Academy’s Humanities Indicators, an ongoing research initiative that combines government data and high-quality data from private sources (including the Academy’s humanities departmental surveys) to illuminate key trends in the humanities.

The report does not sugar-coat the trend in four-year humanities degrees that has caused alarm in recent years. As a share of four-year undergraduate degrees conferred, the humanities have been losing ground to other disciplines since 2007 (falling from 12.1 percent of new degree recipients to 10.4 percent in 2013). And the mix of institutions conferring degrees is also changing. Over the last twenty years, private not-for-profit colleges and universities – a traditional bastion of the humanities – have awarded a steadily declining share of their undergraduate degrees to students in the field (the share in 2013 was the smallest since at least 1987).

The State of the Humanities: Higher Education 2015 notes a number of other upward trends that could be interpreted as signs of the field’s health. For instance, from 1987 to 2013, the share of associate’s degrees that had substantial humanities content (including “liberal arts” and “liberal studies” degrees that generally require a disproportionate number of credits in humanities subjects) rose from 25.8 percent to 38.9 percent of all two-year degrees. Along similar lines, the number of AP exams taken in the humanities more than quadrupled from 1996 to 2013, and was considerably larger than the number of courses taken in other fields throughout that time period.

To provide context for the report, the Academy published a discussion of its findings in its online Data Forum, with commentary from Academy Fellow Danielle Allen (Institute for Advanced Study and Harvard University) and Michael Roth (Wesleyan University). Both Allen and Roth note the rise in associate’s degrees and AP exams, but draw different conclusions about the implications of these striking trends. For Danielle Allen, the declines at the baccalaureate level and corresponding increases in AP exams and associate’s degrees suggest “the humanities are in decline as a form of specialization and respected expertise.” She warns that “the growth in the general education sector of higher education works against the preservation of research expertise in the humanities.”

Looking at the same set of data, Michael Roth offers a more optimistic assessment, observing that “whatever the motivations for taking humanities classes, it’s clear that the ways of thinking and fields of study on which they focus are recognized as relevant across so many domains in the STEM and social science fields.” He concludes that “students together with their families and future employers recognize that the benefits of a pragmatic liberal education – whatever the major – extend far beyond the university. And many still recognize that the humanities are a catalytic resource of life-long learning – for inquiry, for absorption, and for making meaning and direction in one’s life as one makes one’s way in the world.”

Danielle Allen concludes by challenging humanities faculty “to help diversify the professional pathways to which that expertise can lead” and “work on a stronger strategy of collaboration between those who work in the domains of humanities research expertise and those responsible for the general education curriculum.”

As these two perspectives suggest, The State of the Humanities: Higher Education 2015 is facilitating a wide-ranging discussion about the current and future health of the humanities.