Point of View: Talks on Education

By
Kenneth Prewitt
Back to table of contents
Share

Kenneth Prewitt, a Fellow of the American Academy and Vice President from 1989 to 1994, was on the faculty of the University of Chicago (1964 to 1979) during Edward Levi’s tenure. Prewitt currently teaches at Columbia University, where he also directs the Scholarly Knowledge Project, sponsored by Sage Publications. 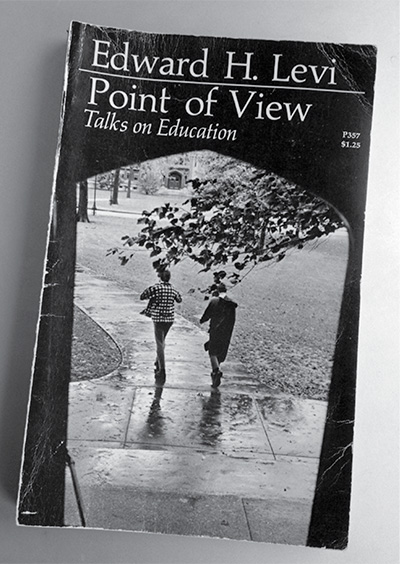 What would Edward H. Levi, President of the American Academy from 1986 – 1989, think of crowd sourcing – of the idea, common among techno-optimists, that knowledge need not be filtered by gatekeepers – editors, curators, faculty – but should be directly and democratically accessible? A hint appears in Point of View, when Levi cites an adage George Bernard Shaw hung over his fireplace: “They say. What say they? Let them say.”

Levi, like Shaw, a skeptic, insisted that the frequency with which an idea is repeated “is not a test which promotes rational discussion. It is a setting in which the waves and tides of popular thought . . . have magnified importance.” (pp. 8 – 9) It is a tragedy for society, noted Levi, to believe that how often something is said or how many say it is a guide to knowledge or source of truth.

Levi’s likely view on crowd sourcing is a starting point to reflect more broadly on his view of the research university – a companion essay to Jack Fuller’s reflection on how Levi, as Attorney General, restored legal integrity to a government corrupted by Watergate.1 Levi’s task as professor, dean, provost, and president of the University of Chicago was to stiffen the resolve of its faculty buffeted by voices, some internal, doubting its authority and its relevance in the turmoil of the 1960s.

The specific challenges of a half-century ago have faded only to be replaced by new ones arriving with the digital revolution and changing market forces. Research universities, along with libraries, museums, academic societies, and scholarly publishers, have watched their monopolies erode and established hierarchies crumble. Consultancy firms, think tanks, corporations, bloggers, and, yes, social media with its algorithms are in the knowledge business now. And, yes, crowd sourcing and big data do have things to teach us. The pace is picking up; and there is anxious discussion of whether the American university will follow the path of the American news industry.

Levi’s Point of View is relevant to dubious developments of our time: to the mercenary alacrity with which self-declared entrepreneurial universities mix commercial pursuit with educational mission; to the sad truth that American universities are extending their global footprint more eagerly in the cash-rich Gulf States and East Asia than in Africa, where the need is much greater; to the self-censorship of politically unpalatable scholarship in closed (and wealthy) countries; to the wistful hope that technology will provide a cheap fix for poor teaching; to the infatuation with performance metrics, including the idea that the quality of a degree can be measured by the prospective income of its graduates (but not by the prospective quality of their parenting, civic engagement, or appreciation of the arts). Of these trends, Levi would ask hard questions; I doubt they would gain his approval. But these targets are perhaps too easy.

It may be more instructive to consider Levi’s thinking through his conviction that the research university should not only study social ills, but should act on them, even directly service people damaged by them. He boasted that under his leadership the University of Chicago “. . . runs hospitals, legal clinics, offers psychiatric and psychological help within the public schools, and performs social service work. This is not just research, but service of the highest order.” (p. 132) This, however, was not Levi’s last word. Therein lies its importance. A research university is not a substitute government, charity, or advocacy group. If it takes up action and service it does so only as a peripheral project.

The research university has a different center of gravity. It exists to teach what is known, investigate what is unknown, and then, as the unknown becomes the newly known, replenish what is taught. Inquiry and pedagogy are linked in this endless cycle of the search for knowledge and its dissemination. It is this that distinguishes research universities from governments, charities, and advocacy groups.

Levi’s argument starts from the premise that research universities are about the life of the mind, which requires that they defend “their protected remoteness; their freedom to be objective; their determination to seek intellectual truth on its own terms.” (p. 55) Protected remoteness is not disengaged neutrality. The university is not a by-stander. It should engage, but not in the political ways demanded in the 1960s or the practical ways demanded today. The research university intervenes – uniquely – through propagating the inherent “worthwhileness of the intellectual pursuit of truth.” (p. 182) In a famous formulation, Levi tells us that the university is custodian of reason itself. If at times it fell short in the turmoil of the 1960s, or perhaps in adjusting to the challenges of today, this did not alter its defining responsibility: self-correcting critical inquiry.

The relevance of Point of View today is its subtle distinction between practices and principles. It is not a defense of institutional practices – not even of cornerstones like peer-review, the seminar, or tenure. Point of View is, rather, a resolute defense of principles expressed through those practices. Peer review stands for expertise that assesses the accuracy and quality of knowledge claims; the seminar allows for mentoring and the transmission of standards from professor to student; tenure is simply a means to ensure inquiry free of political interference or influence by its funders.

“Creative destruction” is a phrase often found in commentary on the coming transformation of the university, especially by those who believe that such practices as peer review, seminars, or tenure should give way, at least as we know them today, to make room for technology-based practices and a more secure business model. Perhaps so, but it is well to keep in mind that the creative destruction of which Joseph Schumpeter wrote was in jobs and products. It was blacksmiths and buggy whips that had to go, but not capitalism’s fundamental confidence in the profit motive. Communism erred in that regard, just as crowd sourcing’s mistake is to think it has no use for gatekeepers.

A world without the University of Chicago would sadden Edward Levi. A world without a place of inquiry free of political, commercial, or service goals would alarm him. His message to us: hold fast to the foundation even if creative destruction rearranges – and tosses out some of – the furniture.

1 See the Spring 2013 issue of the Academy’s Bulletin.

Note: All quotations are taken from Edward H. Levi, Point of View: Talks on Education (Chicago: University of Chicago Press, 1969).