By
Phillip Allen Sharp
Back to table of contents
Share 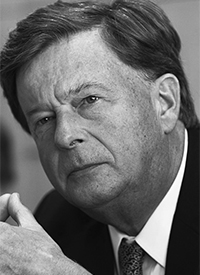 Henri A. Termeer, elected to the American Academy of Arts and Sciences in 1999 and a member of the Academy’s Trust, died unexpectedly on May 12, 2017, at his home in Marblehead, Massachusetts. Henri was a highly respected business leader and entrepreneur, greatly admired for his energetic engagement in biotechnology, community, service, and philanthropy.

Educated in the Netherlands, he immigrated to the United States and earned a master’s degree in business administration at the University of Virginia. Joining Baxter International in international marketing, he became responsible for the blood product division, which likely set the stage for his decision to join Genzyme in 1983 as president. He became CEO of Genzyme in 1985 and redirected the newly established company to develop a treatment for the rare genetic disorder Gaucher’s disease. Following the federal Orphan Drug Act of 1983, which for the first time made it attractive for American companies to develop treatments for diseases of such rarity, Genyzme – through Henri’s leadership – essentially created the biotech orphan disease sector that has greatly improved the health of those afflicted by these devastating diseases.

Genzyme first isolated from human placentas the replacement enzyme for patients with Gaucher’s disease, caused by a deficiency in the enzyme ß-glucocerebrosidase, and the FDA approved the drug in 1991. Henri came to know personally many of these patients and could tell their remarkable stories, which helped him to communicate effectively to the stakeholders the importance of these types of medications. By 1994, Genzyme introduced a version of the enzyme produced through the genetic engineering of cells, which broadened the availability of the treatment and freed production from the possibility of introducing human pathogens. Soon treatments for the orphan diseases Pompe and Fabry were added to Genzyme’s stable of therapeutics. Genzyme grew to over eight thousand employees, many located at its headquarters in Cambridge’s Kendall Square neighborhood and at its facilities in Framingham, Massachusetts.

Henri’s charm, humor, empathy, insight, and commitment to creating a better future drew people to him. He recruited a remarkable set of colleagues to Genyzme during his twenty-seven years as CEO – colleagues who in turn went on to become leaders of biotech companies and founders of innovative start-ups across New England and throughout the world. He was one of a few business leaders who created the biotech sector and the unique cluster of firms that have come to define Kendall Square. Henri’s imprint on the landscape remains apparent in two architectural landmarks built by Genyzme in the Boston area: the Allston plant that dominates Storrow Drive along the banks of the Charles River adjacent to Harvard University; and the Genzyme Center in Kendall Square, an energy efficient, “green” building designed to take full advantage of fresh air and natural light.

Henri embraced life with gusto and shared his time generously with many CEOs and public leaders; after leaving Genyzme he continued to serve as the reigning dean of biotechnology in New England. The future was his focus, not the past. To highlight a few of his leadership activities, he led the national Biotechnology Innovation Organization in 1997 with great effectiveness and served as a member of the Federal Reserve Bank of Boston from 2007–2011, acting as Chairman from 2010–2011. Aware of the importance of educational and medical institutions, Henri supported many of these institutions generously. He served on the Board of Trustees of the Massachusetts General Hospital, the Massachusetts Institute of Technology Corporation, and the Fellows of Harvard Medical School, to name a few. After leaving Genzyme, he served as a board member, advisor, and investor in numerous early-phase technology companies.

Henri leaves his wife, Belinda, and daughter, Adriana, who were with him at the family home when he passed away. In addition, he leaves a son, Nick, and extended family in the Netherlands. At an MIT event celebrating Henri’s life, his daughter, Adriana, spoke of her father in terms of Shel Silverstein’s fable The Giving Tree. She said: “You give and give until you have nothing left and then you give some more.” That was Henri’s spirit – as true of his personal and professional life as it was of his family life. Adriana was involved with ballet and Belinda and Henri enthusiastically supported the Boston Ballet. As with many of the other organizations that he supported – for example, WGBH, the Museum of Science, and Project Hope – as soon as Henri appeared on the scene, he was asked to join the board. With Henri’s unexpected death, we have lost a truly remarkable friend, entirely too early.