Report of the Chair of the Board of Directors

By
Nancy C. Andrews
Back to table of contents
Share 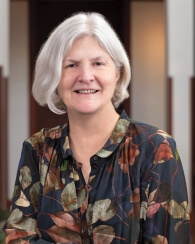 This was a year of reemergence and celebration for the American Academy of Arts and Sciences. Our building reopened for staff and events. We held a joyous Induction Weekend in September, making up for two years of cancellations due to the pandemic. And we finished a very successful capital campaign through the hard work of President David Oxtoby, campaign cochairs Louise Bryson and David Rubenstein, and Chief Advancement Officer Ginger Saariaho, exceeding our $100 million target. We are deeply grateful to them and to the members and friends who gave generously to support our work.

Just prior to our Induction Weekend we dedicated a new wing of the House of the Academy, named for its benefactor, David M. Rubenstein. The Rubenstein Wing houses the Academy’s Archives in a beautiful space that is more hospitable to old documents and researchers than the previous location in the basement. The Archives hold artifacts and records that date to our founding. In the tradition of advancing “useful knowledge,” the earliest contributions include prototypes of American inventions and handwritten reports on “Promoting Agriculture/Branches of Husbandry” (1785–1792), examining “Mr. Dearborn’s Scale for Weighing Gold” (1801), considering a “Description of Patented Improvements in Chimneys” (1809–1810), and investigating “The Alleged Discoveries of Dr. Buchanan” (1843), an American physician who founded the “science” of soul-measuring.

Among other landmark events, the Archives document visits by Alexander Graham Bell in 1876 to give the first public demonstration of the telephone. Academy members were impressed, and Bell was elected to membership the following year. There are many reports on new inventions from the year 1881, including “Horton’s Life Saving Mattress,” an “Automatic Child’s Cradle,” a “Cold Blast Refrigerator,” and “Moore’s Perfectly Odorless Sanitary Water Closet.”

The Archives also hold records that document profound changes within the organization during the twentieth century. In 1944, President Howard Mumford Jones recognized that the role of the American Academy of Arts and Sciences needed to evolve. Other institutions – libraries, universities, research laboratories, foundations, and government agencies – had emerged and sought to amass the nation’s knowledge and know-how. Mumford asked Kirtley Mather, a prominent geologist, to lead a strategic planning process to chart the Academy’s future.

The Mather Commission in its report articulated the Academy’s purpose as we understand it today:

The Commission . . . believes that it is the duty as well as the privilege of the Academy to make known . . . its carefully considered views concerning matters of import. . . . The wording of the Academy’s charter leaves no doubt that an important function . . . is to bring to bear, on matters likely to affect the welfare of society, the knowledge and disinterestedness [objectivity] of their concern for that welfare. The illumination of contemporary practical issues is one of the most important tasks the Academy can now perform.

The Mather Report urged the organization to “accept a definite responsibility for leadership in the formation of public opinion concerning matters of import to the body politic,” to “change the character and mode of distribution of the Proceedings of the Academy,” to “capitalize the inclusiveness and broad coverage of the Academy as an element of strength,” and to raise funds “to support the expanded program of activities.” As I described in my annual report several years ago, those priorities are echoed in the five objectives of our more recent, 2018 strategic plan:

We clearly have a very strong, and consistent, view of who we are as an organization!

Now four years into implementing our current strategic plan, we are very much on track with these objectives. In this issue of the Bulletin, you will learn about current projects and the dissemination of recommendations from published reports; about events bringing members together virtually, in Cambridge, and across the country; about Academy publications; and about philanthropy that supports today’s work and secures our future. On page 74 you will see a list of members of our most recently elected class, who exemplify the progress we are making in identifying and honoring exceptional talent from groups traditionally underrepresented in our organization.

This is my final annual report as Chair of the Academy’s Board of Directors. I am deeply grateful for the opportunity that I have had to help guide this remarkable organization. I know I leave the Academy in excellent hands, with David Oxtoby leading as President, and with outstanding officers, governance members, and staff committed to our important work. I feel particularly fortunate to have had the opportunity to meet and get to know many of our members, and to have helped honor your extraordinary contributions to our country and our world.