The Independence of the Judiciary

Democracy & Justice
Back to projects 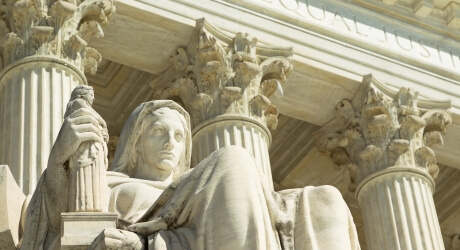 This project examined the evolving relationship between Congress and the Supreme Court. Among other issues, it addressed the Supreme Court's increasing willingness to place constitutional limits on Congress' power to enact statutes; the judicial nomination and confirmation process; and questions of statutory interpretation.

The evolving tension between Congress and the Court and the challenges to judicial independence are at the center of this study. At the time the study began in 2002, the Supreme Court had begun to restrain the power of Congress in a way that had not occurred since the New Deal. The potential implications of the Court’s actions in such areas as environmental law meant that Congress could be prevented from enacting legislation that it deemed necessary to meet national needs. At the same time, growing controversy over issues such as abortion made the judicial confirmation process for both Supreme Court justices and judges in the lower federal courts increasingly contentious. In response to these issues, a committee was formed to determine how the Academy could act as a neutral arbiter to examine the many dimensions of the relationship between Congress and the Court.

As the project developed, so did the relation between Congress and the federal judiciary. If the Supreme Court earlier challenged Congress, later on Congress took steps to control the judicial branch, including consideration of limiting the ability of federal judges to travel and prohibiting them from citing foreign law.

The American Academy of Arts and Sciences will hold a meeting at the Library of Congress on "Congress and the Courts: Independence of the Federal Judiciary" on Thursday, May 15, 2003. How independent is the federal judiciary from the legislative branch of government?
Project Outcomes

In the early years of the project, off-the-record meetings involving federal judges, members of the congressional judiciary committees, legal scholars, and political scientists resulted in insightful discussions about improved relations. In addition, a series of lectures and panel discussions focused on such topics as the career paths of judges, their compensation and benefits, and the confirmation process.

In the course of the study, reports on the project's meetings and discussions have appeared in the Academy’s Bulletin.

In April 2007, the independence of the judiciary was the subject of a panel discussion at a joint meeting in Washington, D.C., of the Academy and the American Philosophical Society. Moderated by Linda Greenhouse, the panel included former Supreme Court Justice Sandra Day O’Connor; Chief Judge of the State of New York Judith Kaye; and Charles Geyh, the John F. Kimberling Professor of Law at Indiana University. Click here for audio of this program.