Skip to main content
The Back-End of the Nuclear Fuel Cycle: An Innovative Storage Concept

The two key players in a multilateral arrangement are the multilateral entity (lessor) and the user nation (lessee), in the form of a special purpose entity (SPE)102 (see Figure 2). Nuclear fuel leasing and nuclear fuel banks have recently been touted as workable mechanisms to facilitate agreements for providing what have often been called “cradle to grave” fuel cycle services to utilities that are only “consumers” of nuclear fuel. While implementation could vary widely, in one possible scenario a service provider or broker might arrange for the delivery of fresh fuel and the acceptance of used fuel at a centralized/regional interim storage facility and at a specified time following its discharge from the utility’s reactor. This type of arrangement would enable small nuclear fuel users to obtain fuel supply and disposition services at competitive prices (see Figure 2). 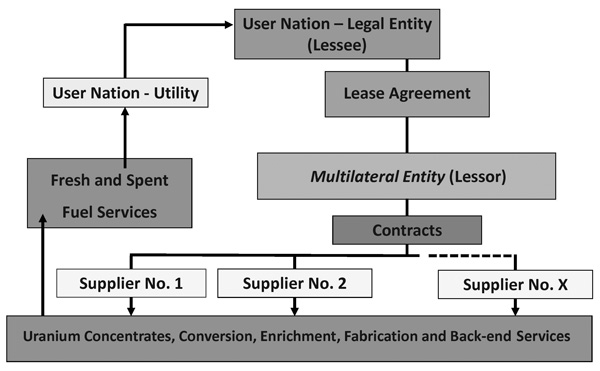 
U.S. utilities have long used lease arrangements through SPEs as a mechanism to finance their acquisition of equipment and nuclear fuel.103 In these leases, utilities arrange for a financial institution to act as a trustee under a trust agreement between the utility and the lending bank.104 Some leases involve a “heat supply contract” with the trustee, whereby the trustee agrees to buy the fuel, lease it to the utility, and base the “rent” payment to the lessor on the heat generated through the use of the fuel in the utility’s reactor.105 As these lease arrangements mature, some utilities have been able to dispense with the need to obtain letters of credit in connection with such transactions.106 Other U.S. utilities have developed their own special financial arrangements to address their cash flow requirements.107

To the extent that states are able, under their national laws, to commit themselves to issue export licenses and grant retransfer approvals needed to establish meaningful long-term fuel supply assurances, those assurances should be incorporated in peaceful nuclear cooperation agreements that provide the legal framework for international nuclear commerce. To bolster governmental attempts to convince emerging state recipients of the binding nature of fuel assurance (assuming faithful performance of the agreement by the recipient), such agreements should incorporate an advance long-term programmatic assurance allowing the fuel and fuel components to be exported and retransferred for processing, and ultimately shipped to the intended destination. Nuclear fuel leases negotiated among private-sector participants should benefit from such assurances to the same extent as the governments under whose agreements for cooperation such commerce is carried out.

This approach offers the following advantages:

This approach offers the following disadvantages:

Concept #2: A Linear Model— A Special Case for the Multilateral Fuel Lease Arrangement

An alternative model that has received some attention is the linear model; in this case, a “bundled fuel supplier” (AREVA) offers bundled services, including conventional reprocessing and recycling services (Figure 3). This bilateral approach is more readily adapted to the current fuel supply regime.

This approach offers the following advantages: 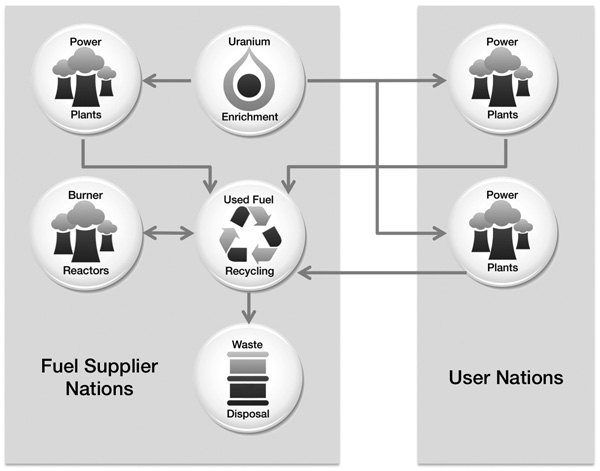 
Industry representatives’ favorable view of the linear model is understandable, as industry would not want to perturb (any more than necessary) the existing viable fuel supply network. Furthermore, one can see how preserving the existing industry contractual agreements would best serve regional storage arrangements.

102. Just as current leases for industrial equipment typically require the lessee to comply with all laws and regulations governing use of the leased equipment, a lease for the provision of fuel to a utility in an emerging nuclear power state should require that the utility comply with all applicable laws, conventions, and agreements concerning possession and use of that fuel, including IAEA safeguards agreements. Noncompliance with these requirements could be explicitly defined as an “event of default,” which would trigger specified rights of the lessor. Economic penalties in the event of default could include, depending on the gravity of the violation, termination of the lease and forfeiture of the lessee’s advance payments to the lessor. Such commercial sanctions would be imposed in addition to governmental sanctions and remedies, pursuant to applicable agreements for cooperation.

To help ensure that the lessor’s remedies can be effectively enforced in the event of the lessee’s default, the lessor could require that the lessee be in a state that is a party to the Hague Convention on the Recognition and Enforcement of Foreign Judgments in Civil and Commercial Matters or (for leases that specify arbitration), the New York Convention on the Recognition and Enforcement of Foreign Arbitral Awards. The efficacy of such remedies, coupled with recipient government guarantees, has been demonstrated by experience with the project finance agreement for fossil-fired generating stations and other industrial facilities in developing states.

Under existing U.S. law, any U.S. fuel assurance will be subject to the need for the U.S. government, as well as private-sector suppliers, to obtain an export license from the U.S. Nuclear Regulatory Commission, an independent regulatory body. Congress and the U.S. executive branch are likely, in any fuel assurance agreements, to retain the authority to refuse to perform U.S. supply assurances, even for reasons that are unrelated to any concerns about the recipient state’s faithful performance of its nuclear nonproliferation commitments. Numerous judicial decisions and fundamental principles of U.S. constitutional law compel a conclusion that, regardless of whether U.S governmental supply assurances contain the usual “subject to U.S. law” phraseology, those supply commitments will yield to any subsequent law enacted by Congress and to any regulation or executive branch order as well; such regulations and orders are part of U.S. law. In light of U.S. practice for many decades, such supply commitments are likely to contain a “subject to U.S. law clause.” Moreover, the U.S. government, in accordance with its past practice in connection with substantive U.S. commitments in treaties and other international agreements, may insist on a broad right of the United States to terminate those commitments, without being in breach of any legal obligation.

103. The 1974 Annual Report of the American Bar Association Section on Public Utility Law states that “Virginia Electric and Power Company financed the fuel supply for its first nuclear unit by organizing a special corporation to own and lease the nuclear fuel.” According to this report, “the lease term for this unit is five years with annual renewal options available therefore . . . and VEPCO can terminate the lease at any time upon sixty days’ notice by purchasing the unburned fuel from the lessor.” The lessor acquired the funds to purchase the fuel by “selling commercial paper, the credit of which is backed by a bank which issued irrevocable letters of credit which are attached to the commercial paper and provide for payment of the commercial paper if the lessor fails to make such payment directly.”

104. The title to the fuel was held by the trustee. The funds to purchase the fuel “were acquired through the sale by the trustee of its commercial paper which is backed by the bank’s irrevocable letters of credit and/or line of credit”; Malone et al., “TRUST,” 2.

106. In 1997, Aetna Casualty and Surety Company issued a “bond of indemnity to the trust which owned the fuel used by VEPCO,” thus assuring “payment of the commercial paper issued by the trust to finance the acquisition of the nuclear fuel”; ibid.

107. Gulf States Utilities was said to have engaged in a transaction in which it sold its uranium oxide to a trust “with a provision permitting Gulf States to repurchase the fuel at a later date at the original sales price plus financing costs.” This “transaction had considerable operating and financial advantages to Gulf States, in that it allowed the utility to raise cash while still retaining control over a future supply of nuclear fuel at a known price”; ibid.

109. If fuel supplier states add to their existing enrichment and conventional reprocessing capability, such a capital investment could be underwritten by new contracts with new nuclear stations.