Collective Responses to Regional Problems: The Case of Latin America and the Caribbean 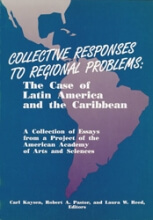 American Academy of Arts and Sciences
Collective Responses to Regional Problems: The Case of Latin America and the Caribbean 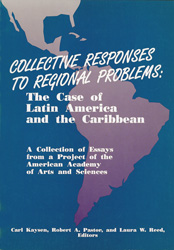 This volume contains a series of essays and commentaries that were originally presented on September 20-21, 1993, at a conference at the Carter Center in Atlanta, Georgia. The conference examined the record of international action to with regional problems as well as the policy implications of the recent shift greater democracy and the changing relationships among Latin American countries and the United States. Professor Robert A. Pastor of the Carter Center, Emory University, presided over the selection of topics and authors.

On the first day of the conference, President of Haiti Jean-Bertrand Aristide made an impassioned plea for outside intervention to help achieve his reinstatement to his democratically-elected office. The tenuous situation in Haiti highlights the gravity of the issues explored in this volume. There is little question that an expanded notion of justified intervention has emerged in the past few years, but the diversity of views presented in this study suggests that many obstacles must be overcome before a consensus can be reached about what collective involvement is appropriate to stop conflicts that often lead to bloodshed and human suffering.]

This volume is part of a larger project on 'Emerging Norms of Justified Intervention," sponsored by the Committee on International Security Studies of the American Academy of Arts and Sciences, with funding from the John D. and Catherine T. MacArthur Foundation. The aim of the overall project is to examine recent shifts in the boundaries between the internal affairs of member states whose sovereignty is protected by the United Nations Charter and those matters which the UN and other international organizations deem to be within their cognizance. For many nations, the concept of justified intervention has long been seen as a contradiction in terms. The justification, however couched, was all too likely to result in the extension of power or the projection of ideology. But the increased opportunities for collective international action presented since the end of the Cold War have provoked UN responses to aggression in Kuwait, to famine and anarchy in Somalia, to civil war and military occupation in Cambodia, and to dictatorship in Haiti, among other actions. Our inquiry seeks to determine whether recent instances of collective action represent more than the temporary convergence of historical circumstances. Do these collective actions reflect the emergence of new norms, shaped by all nations, subordinating the prerogatives of national sovereignty to the recognition of a common humanity?

To answer this broad question, the American Academy assembled an international team of scholars, policy makers, and lawyers to conduct research in two realms: broad conceptual analyses of the changing relationship between third party intervention and nation-state sovereignty; and detailed studies of individual instances of collective involvement in Latin America and the Caribbean. In July 1993, the project published a volume of essays entitled Emerging Norms of Justified Intervention. This earlier collection of essays offers an analytical framework relevant to the more concrete discussion of recent Latin American experience presented here. Two essays from the previous volume may be worth singling out for particular applicability: "Forward to the Beginning: Widening the Scope for Collective Action" by Robert A. Pastor, and the "Introduction" by Anne-Marie Slaughter Burley and Carl Kaysen.

The next step of the project was a regional study of the Latin American and Caribbean experience. Latin America was chosen primarily because of our sense that normative change had both gone further and received more explicit formulation than in other regions. This volume is the product of this regional study. The essays were discussed by invited commentators and other participants and subsequently revised. In addition, conferees discussed some hypothetical scenarios of regional problems that might elicit a collective response as a method of testing some of the ideas presented by the authors. A summary of that discussion is included, along with a list of participants.

The overall project is under the joint direction of Carl Kaysen (Defense and Arms Control Studies, MIT) and Abram Chayes (Harvard Law School). The next stage of the project will include a study of the recent experience and problems of the area of the former Soviet Union and its neighbors, and an analysis of the role of military force in UN peacemaking and peacekeeping. Editorial, research, and organizational assistance was provided by Jeffrey Boutwell and Laura Reed of the Academy staff, with the guidance of a steering committee listed at the end of this volume. Annette Mann Bourne served as production editor.

This volume was made possible by grants from the John D. and Catherine T. MacArthur Foundation and CITIBANK.

Regional Initiatives for Peace and Democracy: The Collective Diplomacy of the Rio Group
Alicia Frohmann, Comment by Peter Hakim

Appendix 1: The Santiago Commitment to Democracy and Resolution 1080
Appendix 2: A Summary of Recent Latin American and Caribbean Elections

This multi-pronged project examined shifts in the boundaries between the internal affairs of member states whose sovereignty is protected by the United Nations Charter and those matters which the U.N. and other international organizations deem to be within their cognizance.