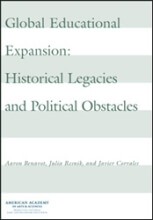 In 1990, the international community resoundingly pledged to achieve universal basic education by 2000. In 2000, they extended this deadline to 2015. Despite significant international attention and effort, at current rates of progress the 2015 deadline will not be met. The unanimity of commitment and shortfall in achievement raise a fundamental question: If universal education is such a good idea, why don’t we have it already?

The project on Universal Basic and Secondary Education asked this question of historians Aaron Benavot and Julia Resnik and political scientist Javier Corrales. Their insights shed light on the challenges that efforts to expand education have faced in the past, and those they face moving forward.

Benavot and Resnik consider the history and legacy of efforts to achieve universal basic and secondary education. Through an examination of aspects of education around the world – the emergence of compulsory education laws, the development of formal school systems, inequality in school systems, and the role of international organizations in the global education system – Benavot and Resnik call attention to the enormous progress made to date in expanding education, as well as to the complexity of the work remaining. Their work serves as an important reminder of the diverse origins of today’s seemingly common international educational framework, and of the need to be aware of these origins in implementing new polices.

Corrales examines the present political obstacles to and incentives for expanding and improving education where it is most scarce. In a study of current obstacles to universal education, Corrales highlights the weak, conflicting, and at times perverse political incentives facing those interested in expanding and improving education at all levels – international, national, and societal. His review hints at the type of policies that would be most effective in creating incentives for governments to expand education by boosting the demand for education among parents and students.

The essays in Global Educational Expansion provide a healthy dose of realism to estimates of the scale of the UBASE challenge. But by illuminating the challenges, the authors also render them finite, and their work will enable policy-makers and education reformers to better meet the challenges moving forward.

Aaron Benavot is a senior policy analyst at UNESCO, working with the Education For All Global Monitoring Report team, and a senior lecturer (on leave) at the Hebrew University of Jerusalem. His research interests include the effects of education on economic development and democratization, the origins and expansion of mass education, and the worldwide patterns of school curricula. He is co-author of School Knowledge for the Masses, with John Meyer and David Kamens, and Law and the Shaping of Public Education, with David Tyack and Thomas James. A forthcoming volume, co-edited with Cecilia Braslavsky, assembles leading research on school curricula from a comparative-historical perspective. He received his Ph.D. from Stanford University in 1986.

Javier Corrales is associate professor of political science at Amherst College in Amherst, Massachusetts. His research interests include the politics of economic policy reform in developing countries. He is the author of Presidents Without Parties: the Politics of Economic Reform in Argentina and Venezuela in the 1990s. In the spring of 2005, he was a Fulbright Scholar in Caracas, Venezuela, and in the fall, a visiting lecturer at the Center for Documentation and Research on Latin America in Amsterdam, the Netherlands. He obtained his Ph.D. in political science in 1996 from Harvard University, specializing in the politics of economic and social policy reform in Latin America.

Julia Resnik is an assistant professor in the School of Education of the Hebrew University of Jerusalem, where she teaches courses on education and civil society, and on globalization and education. Her research interests include cultural globalization, national identity, and the educational incorporation of immigrant children. Her recent publications deal with the diffusion of education models and reforms; in particular, the role played by scholars, experts and international organizations in setting educational agenda and influencing educational realities since 1945. She received her Ph.D. from Tel Aviv University in 2002.

This study investigated the rationale, the means, and the consequences of providing high-quality primary and secondary education to all the world's children.