Estimated Number of Juniors and Seniors with a Declared Major in the Humanities, by Discipline, Academic Years 2006–07 and 2011–12 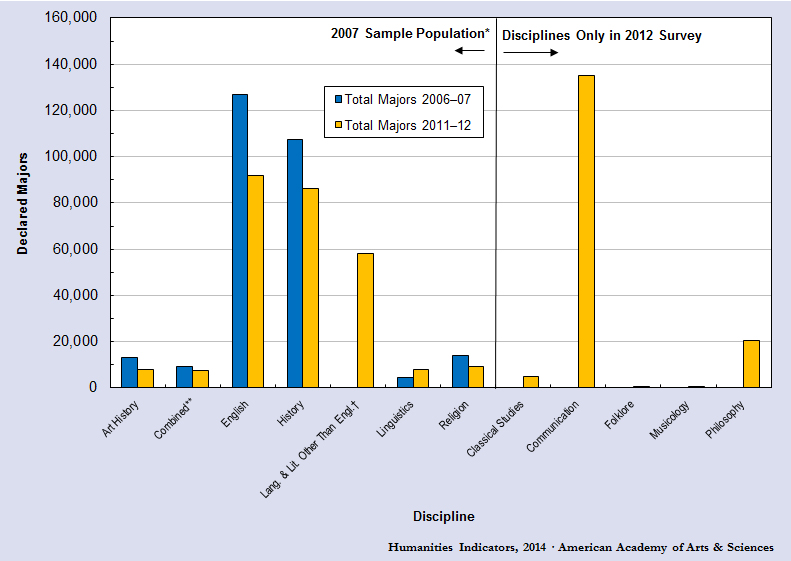 Data Source and Other Information
* For these disciplines, a representative sample of the departmental population was drawn in 2007. Data were collected for this same set of populations for both the 2007–08 and 2012–13 academic years. Because the sample did not include any departments created during the five years between the two surveys, the estimated totals for 2007 and 2012 should not be compared directly. The 2012 values can be interpreted as estimates of minima for the disciplinary totals for that year. For several disciplines, the estimated number of declared majors for 2012 was too small to display clearly on the graph. The number of declared majors for each of these disciplines is: folklore, 120; history of science, 210; and musicology, 390.

† Because some surveyed departments classified as being within languages and literatures other than English for HDS-1 were reclassified as belonging to classical studies for HDS-2, the student totals for the two surveys are not comparable.

Source: Susan White, Raymond Chu, and Roman Czujko, The 2012–13 Survey of Humanities Departments at Four-Year Institutions, Tables 9a and b, pp. 16–17(College Park, MD: Statistical Research Center, American Institute of Physics, 2014). Study conducted for the American Academy of Arts Sciences’ Humanities Indicators Project.
Related Indicators
For context, see the overview of trends in students among all humanities disciplines, as well as the numbers across all disciplines from the HDS-1 population and the disciplines added with HDS-2. For comparisons to specific disciplines, see the tables for the disciplines of art history, classical studies, combined English and languages and literatures other than English, communication, English, folklore, history, history of science, languages and literatures other than English, linguistics, musicology, philosophy, and religion.
Back to Humanities Indicators