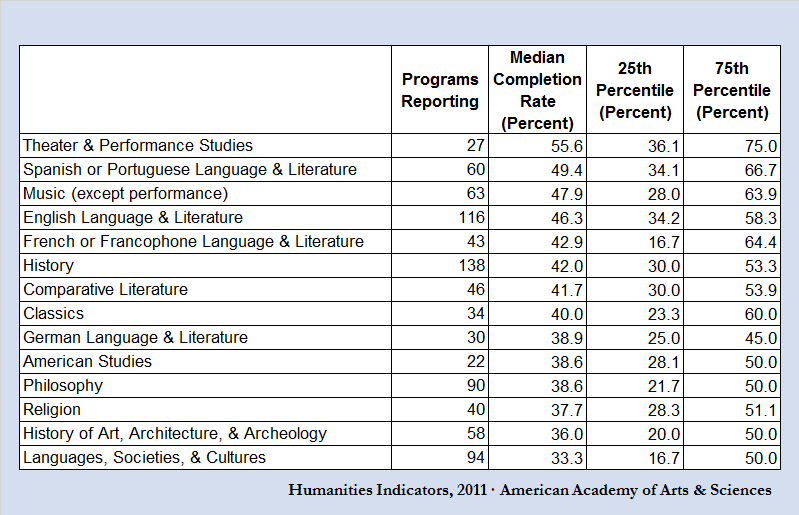 Data Source and Other Information

* “Completion” is defined as a student who obtains his or her Ph.D. within eight years of entering a doctorate program (for humanities programs) or six years (for programs in other fields).

The values reported here are for responding doctorate programs in a given field (or discipline), not the student population in that field. The attrition data presented by the Humanities Indicators come from a comprehensive assessment of U.S. research-doctorate programs administered by the National Research Council (NRC) and funded by the National Institutes of Health, the National Science Foundation, the Alfred P. Sloan Foundation, the Andrew W. Mellon Foundation, and participating universities. The assessment involved the collection of a variety of data on doctorate programs, including Ph.D. completion rates. These data were then used to develop multidimensional ratings of programs at approximately 200 institutions of higher learning (see http://sites.nationalacademies.org/pga/Resdoc/index.htm for more information about the project).

Doctorate completion was defined by the NRC as obtaining a degree within eight years of entering a Ph.D. program for students in the humanities and within six years for students in other fields. Indicator II-15, Years to Attainment of a Humanities Doctorate, reports, during the time period covered by NRC study, the median number of years it took students to earn a humanities doctorate was approximately 10. Thus the completion rate for humanities programs calculated by the NRC does not include a substantial number of students who go on to obtain Ph.D.’s in the humanities.)

This indicator uses the interquartile range (IQR) to describe doctorate program completion rates in the humanities and several other fields. The IQR is widely used as a means of describing the “typical” or “usual” values exhibited by a group and ignores the most extreme values of a particular variable (in this case, doctorate program completion rate). Quartiles are statistics that divide the observations in a batch of numeric data into several groups, each of which contains 25% of the data. The lower, middle, and upper quartiles are computed by ordering the values for a particular variable from smallest to largest and then finding the values below which fall 25% (the lower quartile), 50% (the middle quartile), and 75% (the upper quartile) of the data. The lower quartile and the upper quartile are the two values that define the interquartile range. The middle quartile is also known as the median. As shown in this graph, in the humanities as well as the mathematical and physical sciences, the middle half of the programs graduated from slightly more than 25% to 55% of their students within the anticipated number of years (i.e., eight years for students of the humanities, six years for science students).

Back to Humanities Indicators