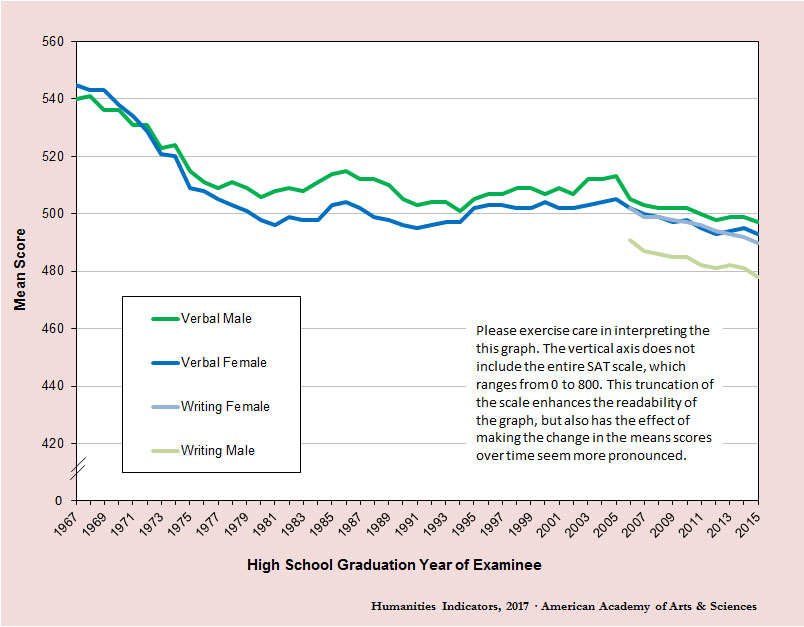 Data Source and Other Information
* Scores for each year are for the students graduating in that year who participated in the SAT program. Students are counted only once, no matter how often they tested, and only their latest scores are tabulated. Cohort data presented through 2006 include students who tested through March of the senior year, while cohort data from 2007 to present include students who tested through June. Please see “About the Data” for additional information about changes in the examinee population on which the statistics presented here are based.
Source: The College Board, “10-Year Trend in SAT® Scores Indicates Increased Emphasis on Math Is Yielding Results—Reading and Writing Are Causes for Concern,” press release, October 24, 2002; and The College Board, Total Group Profile Report: 2015 College-Bound Seniors (New York: The College Board, 2015).
About the Data
The College Board, the body that administers the SAT, attributed the sharp decline in the SAT verbal score in 2006 to a decline in the number of students who retook the exam (examinees’ scores tend to increase substantially the second time they take the test). Some observers offered a different explanation, asserting that the diminished average score was due to the increased length of the exam, which included a new writing section. College Board officials responded that an analysis of approximately 700,000 tests produced no evidence to support this theory. The College Board’s findings are described in Xiang Bo Wang, Investigating the Effects of Increased SAT Reasoning Test Length and Time on Performance of Regular SAT Examinees, Research Report no. 2006-9 (New York: The College Board, 2007). Two recent developments have affected the composition of the student population on which the SAT mean scores reported here are based. First, The College Board began including the scores of students who took the test later in the year. Through the high school graduating class of 2006, the college-bound seniors cohort had included only those students who tested during or before March of their senior year. Over time, The College Board observed a trend in which more students were taking the SAT for the first time in May or June of their senior year. Consequently, beginning with the class of 2011, college-bound seniors cohort data reflect all students in a graduating class who took the SAT at least once through June of their senior year. The 2011 College Board reports that focus on trend data include recalculated data for 2007–2010 in order to present the previous five years of data on a comparable measure. Second, The College Board has recently sought to increase access to college, particularly for underrepresented minority students, by offering school-day testing. Offered for the first time in the spring of 2010, SAT School Day helps states and districts foster a college-going culture and increases access to college. Enabling students to take the SAT at no charge to them (costs are covered by states and districts) during the school day ensures that promising students who might otherwise face barriers to standard Saturday testing—such as part-time jobs or family responsibilities—do not miss out on a chance to attend college. These and other actions resulted in gains in SAT participation by underrepresented minority students from 2012 to 2015—especially among students of Hispanic descent, whose share increased three percentage points. Information on the ethnic/racial composition of each testing cohort can be found in Total Group Profile Report, which is published annually by The College Board; however, only the reports from 2011 onward include data through the June administration of the students’ senior year.
Related Indicators
See Indicator I-1c, “Reading Performance of 17-Year-Olds as Measured by the National Assessment of Educational Progress Long-Term Trend Assessment, 1971–2012,” and Indicator I-1f, “Percentages of 12th Graders Scoring at Reading Achievement Levels Compared with Those for Math and Science, 1992/2005–2009/2013.”
Back to Humanities Indicators