Americans are losing out because so few speak a second language 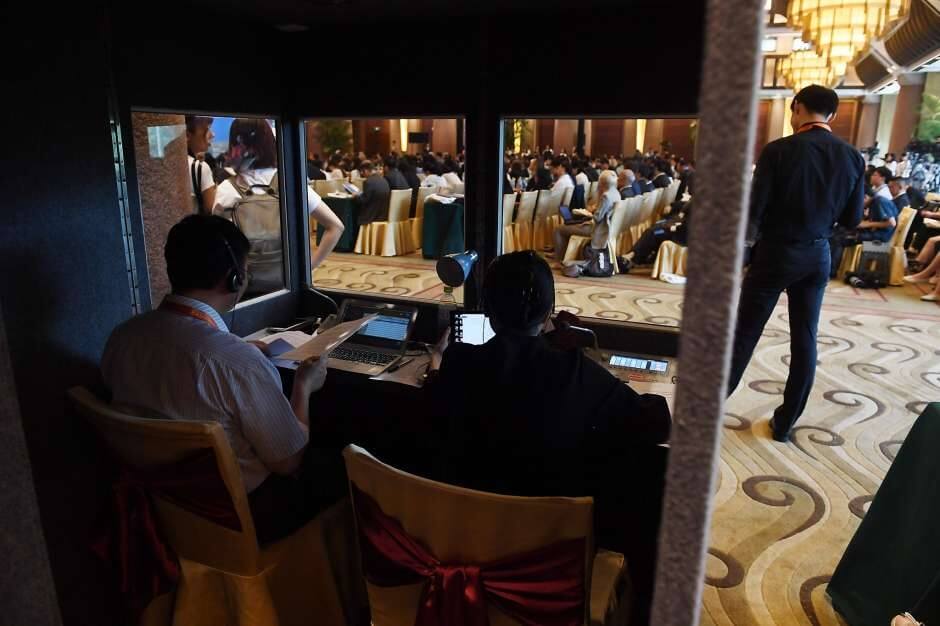 Translators work in a booth as delegates listen to speeches during the opening session of the Belt and Road Forum on Legal Cooperation in Beijing on July 2.
Photo: Greg Baker / AFP / Getty Images

The United States may be the single most powerful nation in the world militarily, and remains a global economic giant, but we have seen repeatedly that our influence is limited. In part, we are constrained by our inadequate understanding of other nations and peoples, and by our inability to communicate effectively with them.

It is therefore disturbing, and evidence of a dangerous myopia, that we continue to neglect training and education in languages other than English.

In 1979, I was a member of the President’s Commission on Foreign Language and International Studies, which found that “Americans’ incompetence in foreign languages is nothing short of scandalous.” Last year, nearly 40 years later, the American Academy of Arts & Sciences released a similar report, “America’s Languages,” and its findings were eerily similar: “[T]he dominance of English, to the exclusion of other languages, has also had adverse and often unforeseen consequences at home and abroad — in business and diplomacy, in civic life, and in the exchange of ideas.”

What has not changed, however, is that English alone — an education in English to the exclusion of other languages — remains insufficient to meeting our needs in a global world.

In times of great national security challenges, such as those we face today, as well as in times of great opportunity, such as the opening of new international markets, we find ourselves scrambling for people who can speak, write, and think in languages other than English. In those moments, we search high and low for people who can communicate in Mandarin, Japanese, Russian, Pashto — and especially for people who understand the idioms and nuances that characterize true communication in any culture.

Because it is difficult to find such people immediately, we are at a disadvantage. Language acquisition is a marathon, not a sprint. By the time we educate and train the experts we need to help us address a particular language gap, we are often too late. The crisis has shifted. Others have captured the new market.

As a matter of public policy, this is a terribly inefficient way to operate.

Fortunately, business leaders and policymakers are beginning to catch on to this dilemma and to focus more attention on the nation’s language needs. For example, the academy report responds to a request from a bipartisan group of U.S. senators and representatives who acknowledged that “English is no longer sufficient as a lingua franca — neither at home or abroad.” These members understood that to succeed, the nation must intensify its language training. They asked the academy for advice about how to adjust.

In response, the Academy issued its report, and now it has released a call to action signed by more than 150 organizations and 35 individuals who urge greater support for languages in order to maintain and enhance American global leadership. As a signatory, I am joined by Norman Augustine, retired chairman and CEO of Lockheed Martin Corp. and former under secretary of the Army; Melody Barnes, former director of the White House Domestic Policy Council; Karl Eikenberry, former U.S. ambassador to Afghanistan and retired U.S. Army lieutenant general; Robert Haas, chairman emeritus of Levi Strauss & Co.; Rush Holt, CEO of the American Association for the Advancement of Science, and many others.

All of these leaders and institutions recognize that we have a responsibility to ourselves and to future generations — as parents, educators, policymakers, and leaders in business and government — to support language learning in the United States, and to foster and reward language competency.

This support should include the training and certification of more language teachers, the creation of more public-private partnerships in language education, encouragement for immigrant and indigenous language communities to retain and master languages in addition to English; and better opportunities for study abroad.

Several initiatives are already advancing around the country to address some of these needs. In 2017, a bipartisan group in the House of Representatives proposed the World Language Advancement and Readiness Act. If passed, the act would fund a grant program within the Department of Defense to foster innovative language instruction in K-12 education. Title VI of the Every Student Succeeds Act includes federal funding for a new program to support Native American, Alaska Native, and native Hawaiian immersion programs. State legislatures in Delaware, Indiana and Utah have also dedicated significant resources to the creation of successful K-12 immersion programs.

California will soon follow their lead now that Proposition 58, the “California Education for a Global Economy Initiative,” received overwhelming voter support to create school-based immersion programs. And both the federal government and several states, including California, now offer loan-forgiveness programs to encourage future teachers to focus on areas of critical need, like language education.

These are all encouraging signs, but we are only at the beginning of the effort. As the academy report concludes, we need to improve access to as many languages as possible for people of every age, ethnicity and socioeconomic background. America’s leadership in a global world depends on our ability to understand that world. And there is no better way to understand others than to speak their language.

Leon Panetta, as director of the CIA, oversaw the operation that took down Osama bin Laden. He served as secretary of defense under President Barack Obama.