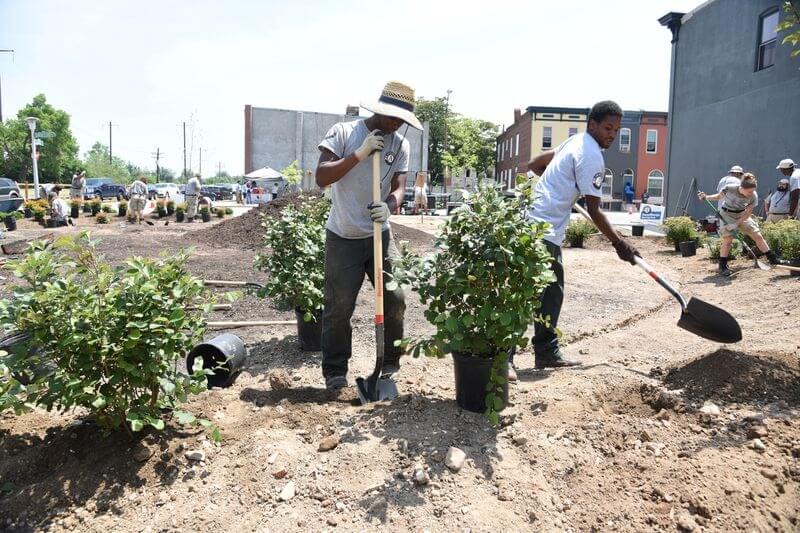 AmeriCorps volunteers plant shrubs in a vacant lot in the 2300 block of E. Eager Street in Baltimore in this 2015 file photo. Kim Hairston/The Baltimore Sun

You may not be familiar with it, but the American Academy of Arts & Sciences is one of our country’s most notable scholarly organizations. Founded in 1780 during the American Revolution by John Adams (with Benjamin Franklin and George Washington serving as some of its first fellows), the Academy recently put out a report entitled Our Common Purpose: Reinventing American Democracy for the 21st Century.

This report could not be timelier. With an eye toward the 250th anniversary of the signing of the Declaration of Independence in 2026, the Academy has spent the last two years speaking with people in communities across the United States on how best to shore up our democratic habits. The report was issued in June, months before the raucous end to the 2020 election and the rioting that engulfed the Capitol on Jan. 6.

We believe that one of the report’s recommendations is essential to strengthening our democracy, the call to: “Establish a universal expectation of a year of national service and dramatically expand funding for service programs or fellowships that would offer young people paid service opportunities.”

We note this recommendation comes at an important moment. One of the provisions of the $1.9 trillion American Rescue Plan would answer the academy’s call to action with an almost $1 billion increase in the AmeriCorps program. With the wrangling over high-profile items like the $15 minimum wage getting extensive coverage, this historic increase in funding for AmeriCorps has received scant attention. The additional dollars for national service would fund a dramatic expansion of the number of AmeriCorps positions available nationwide.

Service is the bedrock of our democracy, and recent college graduates are clamoring for a chance to serve through AmeriCorps. Driven by a mixture of pragmatism (the job market is tough) and idealism (a search for a role with meaning), we have seen dramatic increases in applications for spots in our own programs — the Great Oaks Foundation and Baltimore Collegiate School for Boys. In February 2020, 108 people applied for a yearlong fellowship as an AmeriCorps member with us. Last month, February 2021, that number had more than doubled to 239 applicants.

For many young people, a year of service through AmeriCorps is a springboard not only into their professional lives but into active roles as community members and citizens. .  .  .

Why America Needs Service, Now More Than Ever