On April 11, 2019, the American Academy of Arts and Sciences presented the inaugural Award for Excellence in Public Policy and Public Affairs to Ernest J. Moniz, the 13th Secretary of Energy of the United States. Ashton Carter, who served as the 25th Secretary of Defense of the United States and is the current Director of the Belfer Center for Science and International Affairs at Harvard Kennedy School, introduced Secretary Moniz and presented the award. An edited version of Secretary Moniz’s acceptance remarks appears below. 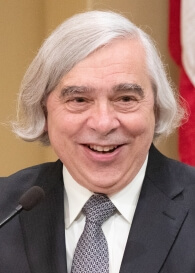 Ernest J. Moniz is President and Chief Executive Officer of the Energy Futures Initiative as well as Cochair of the Board of Directors and Chief Executive Officer of the Nuclear Threat Initiative. He is the Cecil and Ida Green Professor of Physics and Engineering Systems Emeritus at MIT. He served as the 13th United States Secretary of Energy. He was elected a Fellow of the American Academy in 2013.

I am honored to receive the inaugural Award for Excellence in Public Policy and Public Affairs. The Academy’s history in this area goes back nearly a quarter millennium and so it is quite special to be the inaugural recipient.

As a simple New England physicist, my engagement in public affairs and public policy really started and was pushed by someone very close to this Academy: Herman Feshbach, my mentor at MIT and also president of this Academy from 1982 until 1986. At that time we were deeply involved in the Cold War; it was also a period when the architecture of nuclear arms control was forming. Many in this room knew Herman quite well and will understand when I say that his way of encouraging my participation in public affairs issues was to threaten me! He had a very charming way of threatening people.

During that period of the Cold War and the formation of the arms control architecture, Herman was not only a proponent of but also a doer of real dialogue and interaction with the Soviet Union. He was a great supporter of Sakharov and the refuseniks. He was dedicated to the dialogue, to the scientific exchange, and to scientific exchanges more broadly as being fundamental to what we would call today risk reduction in terms of what was a very challenging situation with the Soviet Union.

My time serving as Energy Secretary in the second Obama term was a special opportunity to get more deeply engaged in public affairs and public policy. At the time, the whimsical description of the Department of Energy was the Department of Weapons and Windmills, Quarks and Quagmires. The weapons part is certainly understandable. The Department is the steward of the nuclear stockpile, but it also takes the lead in many aspects of the global nuclear non-proliferation program.

The windmills are a reference to clean energy and the Department’s responsibilities to address climate change. The quarks refer to the fact that the Department is the largest supporter of basic science, especially in the physical sciences, and provides many of the large research facilities that serve thirty thousand scientists in the United States every year. The quagmires are a reference to cleaning up the mess of the Cold War: that is, the environmental mess that we have in many locations.

Let me give an example. We have not tested our nuclear weapons in over a quarter century, and that becomes a science problem. The Department of Energy is the science agency that addresses these important problems.

Now, having said that, serving as Energy Secretary gave me a chance to apply a scientific manner of thought to important problems, especially in the area of global affairs. And the reason that the opportunity was present was because I served for a President who had among his highest priorities two of my mission areas – the clean energy climate mission and the nuclear security mission.

In terms of nuclear security, President Obama launched a series of what turned out to be four biannual nuclear security summits, putting the rather arcane issues of nuclear material security and the like on the agenda with roughly fifty national leaders in attendance. These summits led to some action, which the Department of Energy had much to do with in terms of execution, of eliminating, for example, nuclear weapons and usable materials in many countries. It was a focus area for the President, and for me an enormous opportunity.

In addition, there was the Iran negotiation in the nuclear security arena. Graham Allison, who is here tonight, has been very forward-leaning in terms of advocating for the science statesman idea. I think the Iran negotiation was a chance to really exercise that opportunity.

It is interesting that President Obama did something very unusual; he appointed two Cabinet members – the Secretary of State and the Secretary of Energy – as co-negotiators with their counterparts. It was a “let’s get this done” attitude as opposed to worrying about the protocols and formalities.

The other example in parallel, of course, was the clean energy climate agenda: the Paris Agreement. But what is less recognized is that while the Paris Agreement in terms of CO2 emissions reductions was by definition the last act of the Paris meeting in December of 2015, the first day of the Paris meeting was actually the announcement made by the national leaders. It was called Mission Innovation, with a capital M and a capital I. And this is where the Department of Energy had a chance again to really take a leadership role and eventually pull together twenty countries to sign on to a very aggressive commitment to develop the clean energy solutions for climate change.

What I think is notable is that this was a statement that technology innovation in clean energy is at the core of the solutions to climate change. That was a very impor­tant realization and a chance for us to do a little science statesmanship.

If you look at the climate agreement, which aims to make reductions in CO2 emissions essentially voluntary in the 2030 timeframe, everybody knows that is not a solution to the climate problem. As I previously mentioned, the Iran agreement was not the grand agreement in which every problem that we have with Iran is going to be solved, as opposed to addressing the impor­tant nuclear weapons problem and getting it off the table as a foundation for doing more.

We could not have a grand bargain because the agreement with Iran was not just between the United States and Iran. We were the face-to-face negotiators, but we were representing other countries. Ourselves, plus three in Europe – Germany, France, and the United Kingdom – and Russia and China. This was after Crimea, so we already had a tough relationship with Russia, but we could compartment it and take an impor­tant step toward a solution with Iran.

For both the climate negotiation and the Iran negotiation, we followed a pragmatic, step-by-step approach. In neither case was this viewed as the end of the line. Quite the contrary. It was reaching a very important risk reduction step on the way to what we would do later.

Currently we hear a lot about “going big.” There is a misconception that going big means having a vision. Step-by-step needs vision because, in my view, a long-range plan is often a whole set of short-range plans, but they better aim in the same direction. And that requires a vision to get it done. Unfortunately, right now, in neither of those two cases are we seeing the next steps being taken.

That is a brief description of some of what I was doing at the Department of Energy, but clearly, we haven’t stopped in the last two years. In the private sector we have additional tools that we can use because we all need to keep trying to contribute.

In Tom Friedman’s column yesterday, he mentions the Clean Real Deal. We have magical thinking on the right, like climate denial, and magical thinking on the left, with scientifically and politically impossible solutions put forward. The real issue is rolling up your sleeves and working to get pragmatic solutions that go, in this case, toward lower carbon and give you the chance of building the political coalitions around low carbon and social equity that we will need to make progress. This is being advanced by the Energy Futures Initiative, which I helped establish in 2017.

Going back to Herman Feshbach, we need dialogue. We have never had such a poor level of dialogue as we have right now with Russia. It is not because they are not our friends that we need dialogue. It is because they and we have over 90 percent of the nuclear weapons. We need to think about strategic stability in a new age, driven by new technical issues such as cyber risks in the command and control system. We need scientist-to-scientist discussion. We need military-to-military discussion. We need diplomat-to-diplomat discussion. We need to have that web of dialogue that is absent today. And that paralysis exposes us to the risk of terrible miscalculations escalating from other incidents. We are addressing this at the Nuclear Threat Initiative.

Let me conclude by saying again how honored I am to receive this award. It will give me added inspiration to take some steps forward on the way to longer-term solutions.