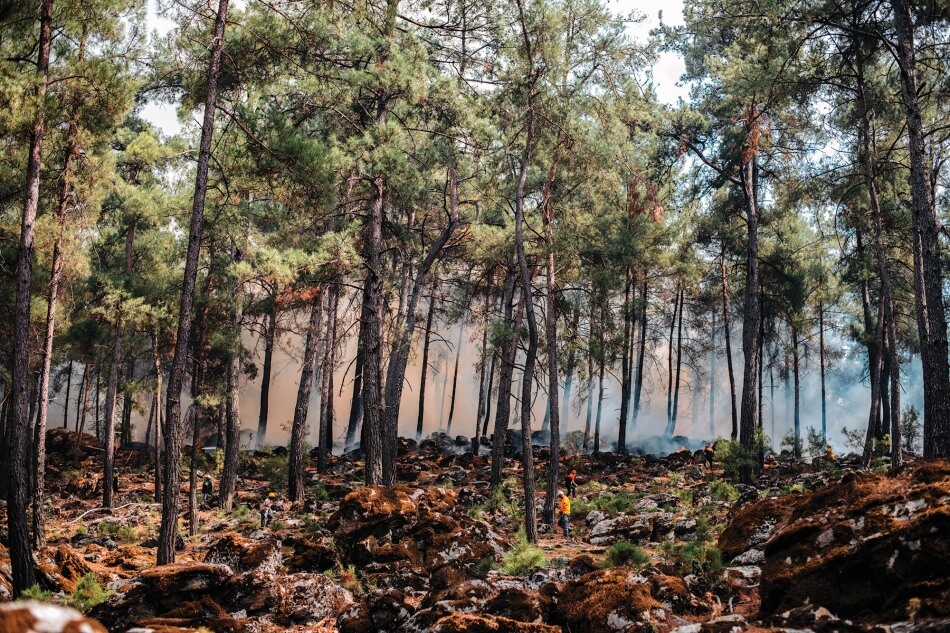 By Sophia Charan, Hellman Fellow for Science and Technology Policy at the Academy

On June 21, 2018, meteorologist Jeff Berardelli printed an image representing global temperature change onto a tie and wore it on a CBS broadcast.1 Other meteorologists followed his lead, and on the first day of summer every year since, broadcasters have used these ties and similar pins and necklaces to spark conversations about climate, policy solutions, and local environmental changes.

This example of climate communication is just one that was shared in the sounding sessions held by the Academy’s Commission on Accelerating Climate Action. Formally launched in September 2021, the Commission* – chaired by Mustafa Santiago Ali (National Wildlife Federation; Revitalization Strategies), Christopher Field (Stanford University), David G. Victor (University of California, San Diego), and Patricia Vincent-Collawn (PNM Resources) – has three working groups: one on communication, a second on the private sector, and a third on human and military security. As the Commission gathers information about barriers to effective and timely action on climate, each working group is organizing interviews and sounding sessions with leaders on climate who have a wide range of expertise.

This information gathering comes amidst constant news about a changing climate. Discussions about rising gas prices and energy independence have been part of the daily public discourse since Russia invaded Ukraine at the end of February 2022. Simultaneously, another installment of the Intergovernmental Panel on Climate Change (IPCC) Report warned that countries are already seeing the effects of climate change, that chances to avert larger disasters and adapt to the world’s most likely climates are rapidly approaching and passing us by, and that the poorest and most marginalized groups will be the ones most affected.

Faced with the impacts of climate change, approximately 97 percent of climate scientists think global temperature changes are caused by human activity.2 Only 57 percent of American adults agree.3 To address this incongruence, over the last few months the Commission’s communication working group – chaired by Bob Inglis (republicEn.org), Kathleen Hall Jamieson (University of Pennsylvania), and J. Marshall Shepherd (University of Georgia) – spoke to twenty-five individuals who work in and around broadcast media, in youth and conservative climate organizations, and in entertainment. Each person shared their success stories, recounted lessons on communication ventures that went awry, discussed what prevents them from affecting more change, and shared instances of exemplary climate communication.

They talked about the increased toxicity of poison ivy, the effect of sea-level rise on the Maldives, the recent film Don’t Look Up, examples of popular media infused with climate-friendly material, the power of speaking from personal experience, the engagement of youth and their moral clarity, generational and political divides, and the effects of different climate communication strategies.

Some interviewees shared examples of effective communication that centered on emotional and personal stories; others used beautiful visuals; and some exhibited zany geekiness. Several who work in the arts spoke about a need to convey urgency; others in broadcast media talked about the slow process of bringing the public along with the message.

While sounding session participants approached the question of what is exemplary communication from different perspectives, the communication working group heard repeatedly that the messenger matters, especially for audienc­es that may be more skeptical of climate-friendly messages. No one can argue with personal experience. For most communicators, this meant that their messages most effectively reached people with overlapping identities or who considered them a member of their community. In some cases, however, it was how the communicator was perceived by a particular audience. For example, a communicator who does not identify as center right learned from the social scientists who were analyzing her messages that she effectively and consistently reached that demographic.

Communicators from various backgrounds spoke about the need to increase the scale and quantity of good climate change communication. Only about one-third of American adults discuss global warming at least occasionally or hear about it in the media at least once a week.4 Many of the communicators told the Commission that, for the United States to take prompter and more decisive action, Americans need to hear about climate change more often.

Many climate communicators shared that the public is hungry for more information and can understand the truth. Though America is divided in its opinions on climate change, only 9 percent of adults reject that climate change is real.5 Yet many communicators struggle to obtain funding for research into making their messages more effective, for continuing programs that are proven to work, and for reaching more people with the messages they do have. Funders may view climate-centered communication as too depressing to be viable or simply not as urgent as other issues.

The communication working group learned that, while communicators are becoming more comfortable with conveying the facts of global and regional climate change, many have turned their attention to educating the public about climate solutions. In the entertainment industry, this could include adding solar panels to a scene’s background. For conservative groups, solutions might include a warning: “Let’s get this right before big government gets it wrong.” And for meteorologists, it might be a tool that shows the public how much energy wind power will generate on a specific day in their region.

All participants emphasized the importance of communicating about climate well and often. Many expressed the conviction that, with enough effective communication, people and their governments will take prompt and decisive climate actions.

To learn more about the Commission on Accelerating Climate Action, visit the Academy’s website.

*Cochair information revised after publication of the article.