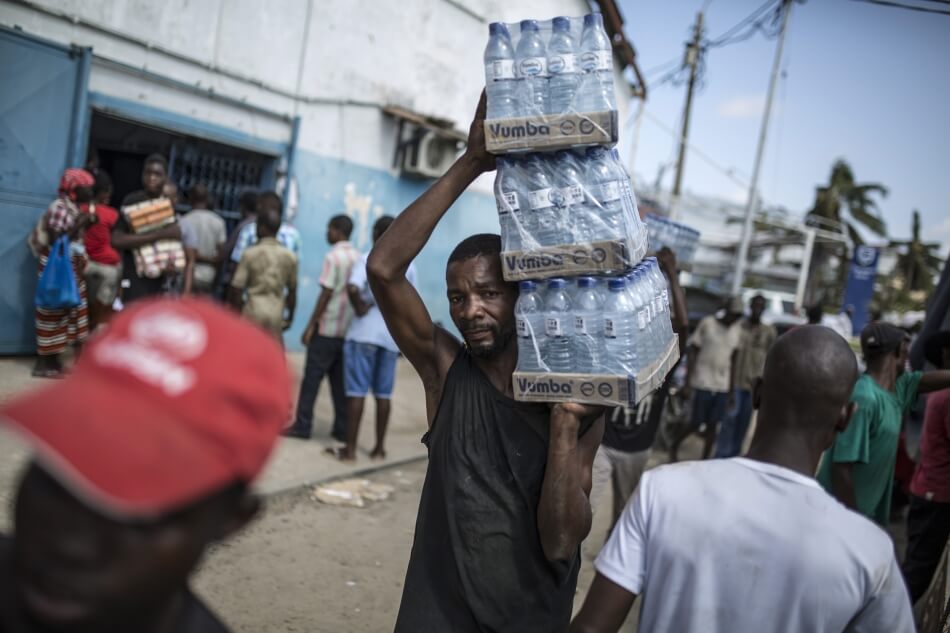 A man carries bottled drinking water from a distribution center on Friday, March 29, 2019, after Cyclone Idai devastated the Mozambican port of Beira and killed at least 700 people in Mozambique, Zimbabwe, and Malawi. Climate change is increasing the power of such tropical storms and further complicating water security across the region. Water – captured, bottled, and commodified – is often only attainable to those who can afford to buy it. © Guillem Sartorio/Bloomberg via Getty Images.

Africa is at the center of the global water predicament and climatic upheaval. The African continent contains the greatest number of least-developed countries, the most woeful sanitation infrastructure, and the highest share of people in highly weather-dependent rural employment. Due to global warming, crop yields are expected to decline sharply, and sea-level rises along the African littoral are already higher than planetary averages. And while the continent remains the most marginal emitter of greenhouse gases, it has perhaps the greatest untapped potential for renewable energy sources: geothermal, wind, hydro, and, above all, solar power.

The Fall 2021 issue of Dædalus, “Water Security in Africa in the Age of Global Climate Change,” guest-edited by Allen Isaacman, Muchaparara Musemwa, and Harry Verhoeven, features fourteen essays that explore policy debates and conflicts over water use as well as the efforts to mitigate these tensions. The contributors include scholars from Africa and the Global North who draw on insights from anthropology, environmental studies, history, water engineering, political science/international relations, and law. Taken together, the essays focus on four dimensions of the water crises facing the African continent in an age of climate change: 1) the increasing scarcity, privatization, and commodification of water in urban centers; 2) the impact of large dams on the countryside; 3) the health and sociopolitical consequences of water shortages; and 4) water governance and the politics of water at the local, national, and transnational levels.

The contributors share the concern that without local, national, regional, and global commitments to creating more equitable access to water, the effects of water insecurity on the urban and rural poor will continue to be devastating. Their research highlights the vulnerability of the underclasses whose voices have long been silenced by those in power and their economic allies, whose dreams of development only benefit themselves.

Dædalus is an open-access publication, and the full issue is available online. For questions and more information, please contact daedalus@amacad.org.

The Fall 2021 issue of Dædalus on “Water Security in Africa in the Age of Global Climate Change” features the following essays:

An Offer You Can Refuse: A Host Country’s Strategic Allocation of Development Financing
Jyhjong Hwang (The Ohio State University)

Water Security in Africa in the Age of Global Climate Change