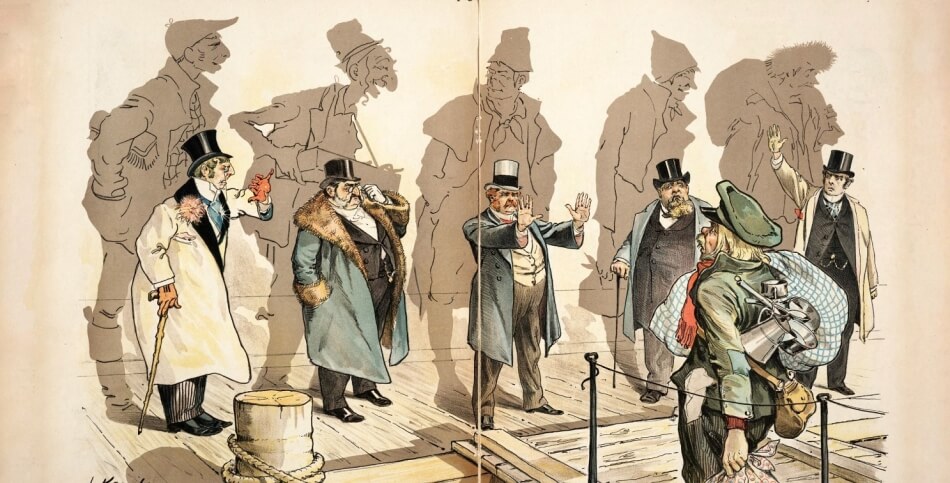 “Looking Backward. They Would Close to the New-Comer the Bridge That Carried Them and Their Fathers Over” (1893) by Joseph Ferdinand Keppler (1838–1894). Chromolithograph, first published in Puck magazine. Held at the Billy Ireland Cartoon Library and Museum at The Ohio State University.

CAMBRIDGE, MA — (See Dædalus online) Dysfunctional immigration and border policies implemented in recent decades have accelerated growth of the Latino population and racialized its members around the trope of illegality. Since the 1960s, Republicans have cultivated White fears and resentments toward African Americans, and over time have broadened these efforts to target Hispanics as well. Until 2016, this cultivation relied on a dog whistle politics of racially coded symbolic language, but with the election of Donald Trump, White nationalist sentiments became explicit and emerged as an ideological pillar of the Republican Party.

The Spring 2021 issue of Dædalus on “Immigration, Nativism & Race in the United States,” guest-edited by Douglas S. Massey (Academy Member; Princeton University), confirms this political transformation, describing its features and documenting its consequences. And while its thirteen essays, authored by scholars in the fields of sociology, political science, law, and education, among others, offer a bleak assessment of the policies and practices—implemented by Republican and Democratic administrations alike—leading up to the 2016 election, there is room for optimism: demographic evidence that suggests a future in which integration, adaptation, and peaceful accommodation in which intergroup boundaries blur rather than harden is possible, achieved partially through the full legalization of the roughly 11 million people who live in the United States without legal permanent residence.

The Spring 2021 issue of Dædalus on “Immigration, Nativism & Race in the United States” features the following essays:

The Surge of Young Americans from Minority-White Mixed Families & Its Significance for the Future
Richard Alba (Academy Member; City University of New York)

Immigration & the Future of America