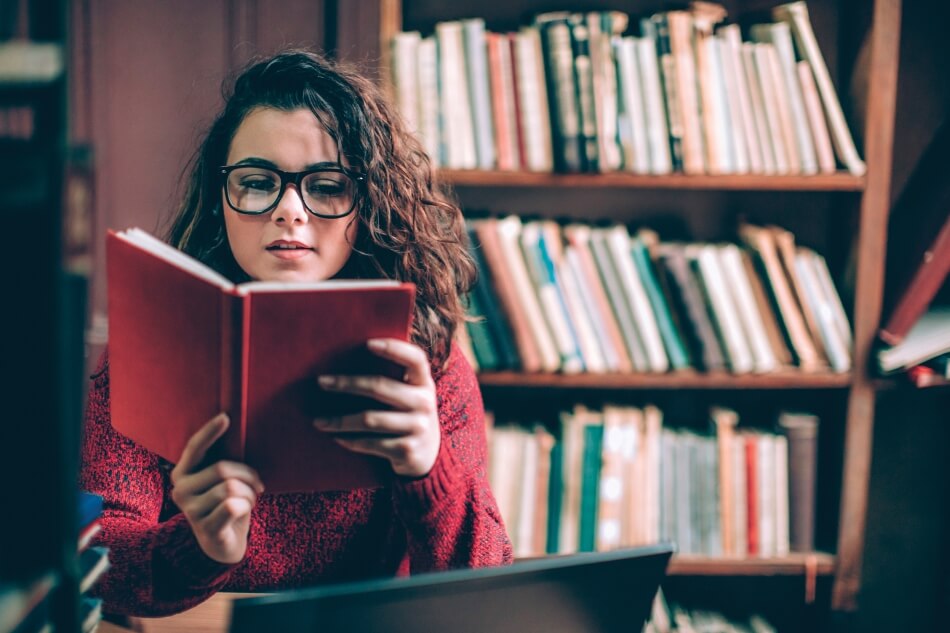 While much of the discussion about the state of the humanities tends to focus on the declining number of students majoring in the humanities at four-year colleges and universities, the health of the field relies on a much wider array of practices, such as reading habits and visits to libraries, historic sites, and museums. Over the past several months, the American Academy’s Humanities Indicators project has been exploring this wider frame of humanities activity by compiling data from federal sources and conducting the first national survey about the health of the field.

To the extent that the humanities are still closely tied to reading, recent trends in Americans’ reading habits provide troubling evidence for the future state of the field. In August 2019, the Humanities Indicators reported that the percentage of U.S. adults who read at least one book for pleasure in the previous year fell below 53 percent in 2017 – the lowest level since the National Endowment for the Arts started asking the question in 1992. The greatest decreases occurred among adults under the age of fifty-five.

A separate survey, which tracks how people spend their leisure time, highlights a similar trend. According to the American Time Use Survey, in 2018, the public spent an average of less than sixteen minutes per day reading for personal interest – a decline of six minutes per day since 2003 (the first year with comparable data). In comparison, Americans spent an average of almost three hours per day watching television in 2018 (which was largely unchanged over the prior decade), and twenty-eight minutes playing games and using computers for leisure (which has risen as reading has declined). Perhaps more alarming, the trend among younger Americans (ages fifteen to forty-four) was even more stark, with an average of less than ten minutes per day spent reading for personal interest.

While the trends are troubling for anyone who cares about Americans’ reading habits, the survey shows a substantial share of American adults who reported reading at least one type of humanistic text in the previous year. As of 2017, approximately 40 percent of U.S. adults had read at least one work of literature, history, biography, or religion and spirituality in the previous year. (Only 12 percent reported reading poetry, though that was a modest increase from the 2013 survey.)

For most types of reading material (excluding religious and spiritual texts), Americans with more formal education had higher reading rates. More than 55 percent of Americans with at least a bachelor’s degree had read a novel or short story in the past year, and approximately half had read a work of history. In comparison, fewer than 35 percent of Americans with only a high school education had read either of those types of work, though 43 percent had read a work on religion or spirituality (which was essentially the same percentage as among those with college degrees).

While these findings do not provide a deeper understanding about how many of these works Americans have read, much less the quality of the texts or the depth of their reading, they do offer a baseline for understanding the public’s interest in particular subjects.

Because reading is only one way to engage with humanities content (though it does serve as a lynchpin for academic study in the field), the Indicators also tracks engagement with other institutions that provide connections to the field, such as visits to historic sites, museums, and libraries.

For example, the Indicators recently reported that as of 2017, 28 percent of American adults reported visiting a historic site in the previous year – an increase of 4.4 percentage points from the 2012 survey. This marked the first increase after a decades-long downward trend (extending back to 1982), though visitation rates remain below the level observed in 2002. Unlike the trend in reading, visitation rates to historic sites have been declining in most age cohorts, but visits from older Americans (ages sixty-five and older) have been rising in recent years – a trend some credit to the accommodations implemented following the Americans with Disabilities Act. The convergence of these two trends (declining rates among younger Americans, rising rates among those aged sixty-five and older) led to a flattening out of the differences between the various age cohorts by 2017.

The trend in visitation rates for museums and art galleries followed a similar trajectory, with approximately 24 percent of the U.S. adult population reporting they had gone at least once to a museum or art gallery in the year prior to 2017. These data represent an increase of almost three percentage points from the nadir in 2012, and reversed a trend going back to 1992. Similar to the trend in historic sites, visitation rates to museums and art galleries are converging among Americans of various ages.

Unlike the trend in visits to historic sites and museums, a separate report from the Humanities Indicators shows that visits to libraries were still falling in 2017. After rising steadily for almost a decade and a half, per capita visits to libraries fell 21 percent from 2009 to 2017, and are now approaching a level last seen in the mid-1990s. Alongside the trend in visits, the circulation of library items has fallen by more than 12 percent over the past decade, despite substantial increases in the number of electronic and audio books.

Even with the recent uptick in visits to historic sites and museums, members of the field often seem to fit these findings into a larger pattern of decline for the humanities overall – especially when seen in light of the falling numbers of college majors. But the evidence linking these trends is tenuous at best. To help understand the connections, the Indicators recently administered a large national survey to explore the nature and extent of the public’s involvement in humanities-related activities and what they think about the field.

With funding from The Andrew W. Mellon Foundation, the Indicators staff developed a wide-ranging survey on the humanities and in fall 2019 administered it in both English and Spanish through a survey panel at NORC at the University of Chicago. The survey received responses from more than five thousand Americans.

The survey explores how Americans engage with the humanities in person and online; the extent of their early exposure to the humanities; the role of the humanities in their work lives; the degree to which they value humanities education; and their perception of how the humanities shape individuals’ lives, civic life, and the nation’s economic fortunes. In the coming months, the Indicators staff will be looking for patterns and connections between the various areas of humanities activity and more general attitudes about the humanities. The results will be released in fall 2020.

For questions about the survey or about other aspects of the Humanities Indicators, please contact Robert Townsend, codirector of the project, at rtownsend@amacad.org.